Illarionov: default in Ukraine is almost inevitable. It will come in late January, maximum in February 2015

Ukraine will be incredibly lucky if the dollar’s course will not exceed to 50 hryvnas per dollar in 2015, the country will face economic and political crisis, and Russia will certainly use it. Still there is a negligible chance to avoid a default, but it is necessary to use this chance in the coming weeks, said in an exclusive interview with "Gordon" Russian economist and former adviser to President Vladimir Putin, Andrei Illarionov. 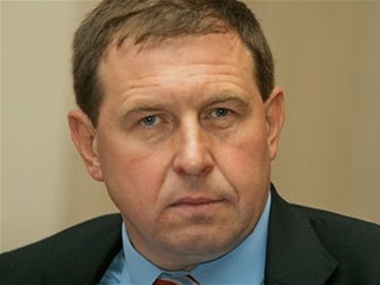 Illarionov: If Ukraine does not &
Photo: aillarionov.livejournal.com

Ukraine entered the New 2015 Year with the new budget, which the Verkhovna Rada was considering for two days in a row and approved it at half past four in the morning of December 29, 2014. The main financial document of the country caused a lot of criticism. In particular, the former finance minister and current MP from the faction "Bloc Poroshenko" Viktor Pynzenyk said that the budget deficit-2015 will not be 64 billion hryvnas as the Cabinet of Ministers assures, but 200 billion.

Default in Ukraine is practically inevitable, said in an interview with "GORDON" Russian economist and senior fellow at the Washington-based Cato Institute, a former adviser to President Vladimir Putin, Andrei Illarionov. The expert notes that now the only question is wether there be a default in late January or February 2015. However, according to Illarionov, there is a slight chance to avoid the financial, social and political collapse in Ukraine.

- After the adoption of state budget for the 2015 by the Verkhovna Rada the message appeared in your "Live Journal": "As Ukrainians has been said repeatedly the default is practicaly inevitable now." So practicaly or inevitable?

- Practically inevitable. There are, however, negligible chance that Ukraine will be able to avoid a default, but to make that happen the Cabinet of Ministers must radically revise and Verkhovna Rada readopt the Budget 2015 within three to four weeks. They should significantly reduce government spendings, eliminate the budget deficit, to start reforms for "Naftogaz "and for the pension system.

- Judging by the statements of the Cabinet, government spendings are rigidly cut, a new tax system is established, in some cases even economic reforms are reviewed

- The new Ukrainian budget does have attempts of reforms. But according to the data given by Victor Pynzenyk, public expenditure will be two-thirds of the annual gross domestic product (GDP). This means an increase in the percentage of government expenditure in GDP by 13-14 percentage points compared to the year 2014, when, according to the International Monetary Fund (IMF), they were 53% of GDP.

- But there are objective reasons to increase the share of government spending: there is a war in Ukraine for almost a year.

- However, if the Pynzenyk’s assessment is valid and the new budget does provide an increase in the share of government spending in GDP from 53% to 67%, it is, quite frankly, the suicide of the Ukrainian state. - If New Year's miracle will not happen and the Cabinet will not revise the budget in the first week of January, then what ?

I was in Kiev in November, trying to draw the attention of the Ukrainian politicians on the unfolding catastrophe. At the end of November reserves were already slightly less than 10 billion. According to preliminary data, the reserves at the end of December will be reduced further by about 2.0-2.5 billion dollars.

- That means that at the end of 2014 the international reserves of Ukraine will be approximately $ 7.5 billion. This is the critical amount that is guaranteed to lead to a default?

- At the beginning of 2015, Ukraine will have to service their obligations on foreign loans, make an advance payment to "Gazprom" for Russian gas. Thus, at the end of January 2015 Ukraine reserves will be about $ 5 billion. At the same time there should be published official figures of the size of government debt and of GDP in Ukraine. Their ratio will exceed 60%. Once that happens, Russia could demand repayment of the debt of Ukraine in three billion dollars.

- Is it the same three billion that President Vladimir Putin gave to Viktor Yanukovych regime in the first tranche in December 2013, a month after the start of Euromaidan?

- You are right. Among the conditions of the Russian loan there was a proviso: the credit can be claimed in advance to be repaid if the ratio of government debt to GDP exceeds 60%. It is doubtful that Mr. Putin won’t use this chance.

- Let’s imagine that Ukraine will pay the debt of Yanukovych ...

- Then the international reserves of Ukraine will be reduced by another three billion - from five to about two billion dollars.

- And if we refuse to pay Russia this loan?

- This will automatically mean the declaration of default, that is, recognition of the inability to service its external obligations.

- Interesting choice: there will be default anyway, the only question is - in January or February. Let's go back to the slight chance that Ukraine will avoid default.

- Theoretically it is possible in two cases. First option: Cabinet radically revise the budget for 2015 and radically reduce government spendings.

The second option: the IMF and foreign lenders will provide financial assistance to Ukraine. Under the baseline scenario, Ukraine needs help in the amount of not less than $ 17 billion. However, the IMF voiced this figure even before the adoption of the budget in 2015. The IMF has already put off the visit of its mission to Kiev to negotiate.

- According to the latest information, the IMF mission will arrive to Ukraine on January 8, after the Christmas holidays.

- The IMF has demonstrated the willingness to help Ukraine. But they will be able to provide loans only if there is a government program that is credible. I'm not sure that the IMF would agree to a program with a budget deficit, which has just been approved. In addition, it is possible that $ 17 billion is not enough. Then the negotiations with the IMF will be prolonged, and February will come without IMF loans.

- And then, as you expect, the inevitable default will come?

- In addition, it will be necessary to wait for the arrival of the new mission of the Foundation. And it will have to consider a new version of the budget. In any case, it is unlikely that foreign lenders will provide Ukraine with new capital if there is no budget that meets the requirements of the IMF.

- I can not even imagine how ordinary Ukrainians would perceive one more night of Parliament gatherings with one more budget from the Cabinet ...

- We only talked about the economic part of a possible default, but we did not discassed its social and political consequences. The lack of external financing and the inexorable reduction in international reserves will lead to the collapse of the currency market of Ukraine.

- Is the collapse has not come yet ? On the black market the dollar is being sold at 20-22 hryvnas.

- it is a light rhinitis compared to the upcoming flu. If a country does not remain the international reserves, the hryvnia exchange rate may fall up to three or five times. You will be incredibly lucky if in 2015 the exchange rate will not exceed to 50 hryvnas per dollar.

The default and subsequent social and political crisis will create conditions for completion of the program Putin to establish control over the whole of Ukraine.

- You are referring to the third Maidan?

- Political crises caused by default and devaluation, often lead to the resignation of the government or the president, and sometimes both. For example, in August 1998, Russia experienced a currency crisis, a default has been declared, ruble fell four times - from 6 to 24 rubles per dollar. On the sixth day after the announcement of default Sergei Kiriyenko government and the leadership of the Central Bank of the Russian Federation resigned. The resignation of President Boris Yeltsin became realistic.

Resignation of the president of the Russian Federation was averted only because the Yeltsin regime changed semi-democratic political system of Russia to the authoritarian rather quickly. It is often assumed that authoritarianism in Russia only began under Putin. That's not true.

- I'm sorry, but Ukraine is not Russia. Give me another example of the political crisis on the background of default.

- In the same 1998, three and a half months before the Russian default, Indonesia wasin a similar situation of currency, debt, financial, economic and social crisis. The crisis led to the resignation of the Indonesian government, and President Suharto, who was in power for 33 years. Even his authoritarian regime could not withstand disasters of devaluation. During the conflicts that accompanied the political crisis some banks, department stores, restaurants, hotels were attacked, over three thousand people were killed on the streets of Jakarta and other Indonesian cities.

- To sum up: Spring 2015, there is default in Ukraine and the political crisis, the Cabinet and the President resigns, the government is temporarily headed by the transitional authorities, the new elections announced...

- All this will create favorable grounds for Mr. Putin, who is closely following the developments in Ukraine and is patiently waiting once again to call Ukraine a failed state. Russia will be able to resume offensive military operations in Ukraine not only from the eastern borders, but also from the Crimea. 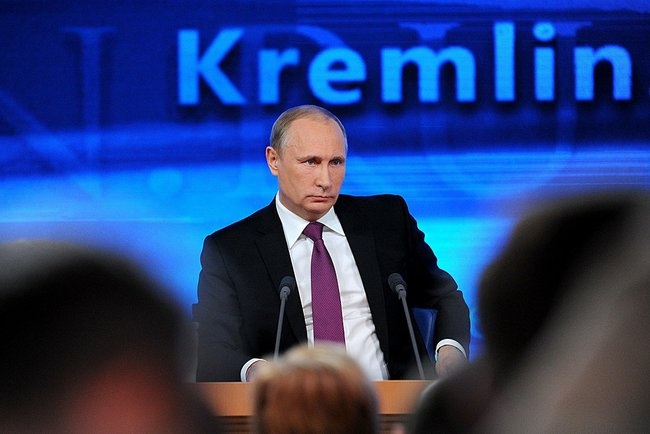 "Putin is closely following the developments in Ukraine and is patiently waiting once again to call Ukraine a failed state". Photo: kremlin.ru
Oil prices could fall to $ 20 per barrel, but Russia has 389 billion dollars of reserves. Expectations that Russia is about to collapse - a profound error

- Do not you think that, taking into account the Western sanctions and falling oil prices in the spring of 2015 Mr. Putin will not think about Ukraine ...

- Statements about the economic crisis in Russia are not based on reliable facts.

Yes, there is a currency crisis, there was even a currency panic. Some imported products have disappeared as a result of Russian sanctions, conducted by Putin, prices have risen. But there is no economic crisis, there is no recession, Russia's foreign exchange reserves amount to 389 billion dollars. Even if to spend it at a rate observed for the last few months, there will still be enough funds for at least two years.

- You have no idea how Ukrainians are following oil prices and the ruble exchange rate. They hope that at least it will make the Kremlin's inhabitants leave the Donbass and the Crimea alone ...

- I am amazed by this kind of talks: say, Russia is about to collapse, it has no economy, but only oil and gas. World oil prices could fall to $ 20 per barrel, this has already happened, but Russia has decent foreign exchange reserves, the Russian economy is not only based on the oil and gas industry.

- Interesting conversation we had: the economic crisis in Russia - a bluff and fiction, but in any case, Ukraine is waiting for default, the political crisis and a possible rebellion of the people. Happy New Year ...

- The main taskfor all Ukrainians, especially for the government - to do everything to avoid a default. And for this it is necessary to revise the state budget, drastically reduce government spendings, eliminate the budget deficit, to start reforms. Then it will be possible to avoid a default and the realization of sad scenarios.