It’s late to swing a sword, or “Svoboda” may be “out in the cold” 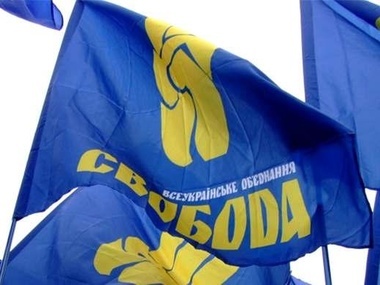 Is the popularity of the All-Ukrainian Association “Svoboda” fading away, what were the representatives of the party best remembered for in the Parliament and on Maidan, and where will the leaders of the Association bring it – the journalist Eugene Kuzmenko is mulling over this in the materials for the“GORDON”.

Yesterday’s ridiculous smoke show in front of the Verkhovna Rada was one of the last attempts of Tiagnibok with his comrades in the finish spurt in overcoming entry barrier in the election-2014.

…And after all how good it all began: sensational 10.44% in the election-2011, broken on the very first session day fence near the Verkhovna Rada, fierce hatred in the eyes of the deputies-“commies”…

Long dreaming about the Rada (and working hard for this) “Svoboda” felt like a birthday girl on a children’s matinee.

What one can say if a lot of representatives of the Russian-speaking intelligentsia, holding their noses when mentioning “mono-ethnic nation” and “moskal-sheeny occupants”, still voted for Tiagnibok’s “lads”. The part of voters and “Svoboda” concluded a kind of the contract: you get to the Parliament and in return – on a regular basis and on all fronts “strike Donetsk in the face”. Because, you know, they have bored stiff at all…

Among all large parties “Svoboda” was then (more precisely, seemed to be) actual monopolist to the right to use with kindred familiarity the name of Bandera, filially mention the Organization of Ukrainian Nationalists – the Ukrainian Rebel Army and proudly chant “Long live Ukraine  - long live the heroes!” In their interviews prominent members of the party brought home directly: a patriot of Ukraine is a man with a membership card of “Svoboda”. Really the word “sheeny” sounded more rarely: nevertheless it is a parliament party, the time to gain international gloss came…

And soon the voter felt vaguely that he was inflated. Instead of “Donetsk” one stroke in the face to Tabalov’s carcasses. Instead of uphill but honorable battle with regional-red horde, - lovely but absolutely worthless shot off Mikhalchuk’s mouth from the tribune. And even more knocked tables by talmuds, yelling from all 37 throats: “Uk-rai-ni-an! Uk-rai-ni-an!”

Instead of great grandchildren of the heroes of Kruty quite narrow-minded political intriguer with the nationalistic rhetoric came to the Ukrainian Parliament.

However, there were “excuses” and light spots too. Let’s say, Vice-speaker Kolushynskii, people’s deputies Sirotiuk and Mirnyi in the variety of situations behaved rather worthy. The party participated in the actions of the opposition faithfully. And what can do a little faction of 37 people?

No, everybody understood everything, but why were there redundantly often feeling of mutual sparring of “Svoboda” and the Communist Party of Ukraine? Why the devil Oleg Tiagnibok and Andrei Mokhnik kissed during the meeting with Tatiana Bakhteeva? And why Aleksandr Yefremov at the meeting of the faction of the Party of Regions with calm smile on a purple face told his own that he is in perfect relations with Oleg Yaroslavovich, and they can easily settle serious matters?

And another thing: all the time the party did stupid things – and never really confessed them. And odious phrase of Igor Miroshnichenko about Mila Kunis, and communist party epic of Irina Farion – “Svoboda” as if intentionally tried to disappoint decent people and excite malevolent admiration of xenophobes and hypocrites.

And then Maidan thundered. During it the leaders of “Svoboda” approved themselves just middling – however like Yatseniuk and Klichko. No, certainly each of them did his bit but herewith as if desperately courageous highest ranks behaved so cautiously that against their background revealed “Right Sector” seemed to be a specimen of patriotism and courage…

And the main thing: “Svoboda” such as in a flash lost monopoly on patriotism and right to point out to “real Ukrainians” what is good and what is bad.

Nether on Maidan nor especially on the war the old mottos didn’t work. Well, what can be “Remember, foreigner, your master is Ukrainian!” if the first who went down into the tomb for Ukraine without Yanukovich were the Armenian Nigoian and the Belarus Zhyznevskii? What “Svoboda” will come and reduce to order” – against the background of the disgusting raid of Miroshnichenko with comrades to the National Television Company of Ukraine? And what, with righteous frothing at the mouth, “Uk-rai-ni-an!” when “language” proposed law of “Svoboda” presented just deliriously out of place and out of time, frightened tricked by Russian propaganda inhabitants of Donbas out of existence and simultaneously approved separatists? What wrathful “Uk-rai-ni-an!” when on the front Russian-speaking children of Ukraine risk their lives minimum in equal proportion with Ukrainian-speaking?

And “Long live Ukraine – long live the heroes!” beginning from the protestant actions was chanted by the whole Maidan – besides without any party and ideological census…

Pretensions of “Svoboda” to patriotic primogeniture right off the bat vanished somewhere.

(Not a few common representatives of “Svoboda” courageously fought and fight on the front – along with activists of the party-opponents).  And formerly bright party too quickly lost the remains of its charisma. There are legends about “professionalism” of the ex-Prosecutor General Makhnitskii and acting Minister Shvaika, but the matter is not just in them. Farion’s “demonic” image is already shabby, Miroshnichenko extinguished, not so confidently Tiagnibok excites the crowd. There is sour scepsis on the faces of sociologists estimated the prospects of “Svoboda” on the threshold of the elections. On the faces of the opponents – cautious malevolence.

But one needs to choose. And behind time the party tries “to set the fire”. Instead of this there is stinking smoking fume – PR “a make belief”. As yesterday in front of the Verkhovna Rada. Yes, the representatives of “Svoboda” themselves hardy would throw blocks and rocks in militia – there are purposely trained provocateurs for this. But the crowd for attacking was created rather consciously. And for a long time it was not in hurry to lead its column from the square in front of the Parliament. It was gathering electoral “scores”. Or thought that it was scoring. Since to be among the backup dancers of Korchinskii is not the most honorable role.

A famous group the Eagles has a song named New Kid in Town, in the album Hotel California it is recorded right after the same named super hit. The plot of the song is the following: a young man moves to a little town – and at once he becomes a favorite of the local citizens. Everybody invites him on a visit, praises, the girls give him looks. The guy quickly gets used to sweet life. Till one day somebody tells him: “Where have you been? There is a new guy in the town! Everybody loved him at once”.

On October 26 the people of Ukraine will decide whether this song is about the party “Svoboda”.