Journalist Butusov: It would be optimal to get from Europe and the US military satellites and electronic interception system, not weapons 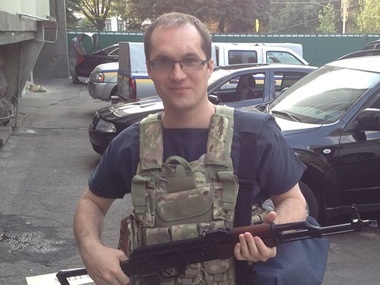 Butusov: The West has always lagged behind Putin's two steps in its influence on the development of the conflict
Photo: Yuri Butusov / Facebook

Russian President Vladimir Putin is a step by step along the path of escalation and he can only by stopped by arms shipments to Ukraine, says journalist Yurii Butusov.

It is wrong to ask the West lethal weapon when Ukraine needs more military satellites, said in a comment to "GORDON" journalist, chief editor of "Tsenzor.NET" Yuri Butusov.

"I think we don’t need weapons from the West, and it is a mistake to ask them. We need spare parts for Soviet technology, transport and communications. We need non-lethal kinds. We need modern training centers, not in a war zone with ready instructor staff. We need a radio-electronic intelligence. Let them give us their satellites, which provide real-time transmission of terrestrial intelligence. These satellites can, regardless of cloud cover in control of the fighting and give us precise instructions on hitting targets, "- he said.

According to Butusov, the debate over the supply of lethal weapons is far-fetched.

"The debate over lethal weapons is absolutely far-fetched - our leaders have little understanding of the essence of fighting. There is a diplomatic game, as the supply of lethal weapons - this is a higher level of commitment compared to non-lethal supplies. But if we talk about the needs of Ukraine, I would not talk about lethal weapons now. Provide us with intelligence, provide us with access to remote sensing satellites, or better with military satellites that monitor the situation. The US and the UK have the most powerful electronic interception system in the world. It would be optimal, and that's all we need to win. All the rest - minor things, "- said the journalist.

He believes that Europe and the United States do not give Ukraine weapons, because they do not want to take responsibility.

"If we talk about diplomatic strategy, Europe and the United States do not want to give us weapons because they do not want to take responsibility for a possible escalation of the conflict. If you give a weapon, you begin to answer for its usage. They havel not decided yet exactly how to behave themselves with Putin. Currently they are trying to avoid non-violent means, but they do not work, because the West has always lagged behind Putin's two steps in its influence on the development of the conflict. If the current level of sanctions had hit Putin’s head in February, or, in March, the conflict would have been stopped immediately after the annexation of the Crimea. And now these methods don’t work. Putin is a step by step along the path of escalation and he can only be stopped by the supply of weapons, "- said Butusov.