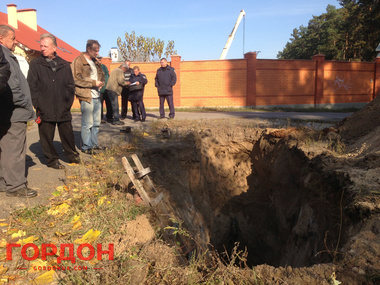 The cottage of the businessman and former Deputy Igor Franchuk along with other houses of wealthy people are left without water after residents of the Chapaevka residential unit in Kiev cut an illegal pipe through which free water had been supplied for over 20 years.

In the Chapaevka residential unit (Holosiyivsky district, Kyiv), the locals cut the pipe supplying water to Lesnichaya Street where cottages of wealthy people are situated, including that of Leonid Kuchma’s former son-in-law, businessman and former Deputy Igor Franchuk.

The scandal erupted more than two months ago, when the work of the only kindergarten in the neighborhood located in Holosiyivo park reserve near Concha Zaspa (area where most of Kyiv’s rich people live - GORDON ) was stopped. The reason for stopping the kindergarten is the cessation of water supply because of debts.

- On August, 1 kindergarten was cut off water that was supplied by the nearby Olympic center. Water as shut off due to overconsumption. However, the water counter in the kindergarten showed one figure, while the counter in the Olympic center quite another. Discrepancy in the figures appeared because another pipe was illegally connected to the pipe belonging to the kindergarden; it supplied water to the streets nearby. That is, the water was taken away by the residents of the cottages, though it was paid for by the children's institution. Has always been paid. The kindergaredn was built in 1994. The power has been constantly changing for 20 years, and nobody has paid attention to such things as water overconsumption. But now the price for water has risen, people began to count money. The kindergarden has accumulated a debt of over 14 thousand hryvnias, the Olympic center shut off water, telling to pay off and repair the leak.

According to activists of Chapaevka, they regularly addressed both district and city authorities to solve the problem. Attempts to negotiate the question with the owners of expensive houses did not help either.

‘You can see the by the houses that rich people live there,’ added Degtyarev, ‘Franchuk’s cottage is at the end of the street. You know the orders of the powerful: we are knocking at the gate, they look through the peephole, say ‘This is a private area’ – and the conversation is over. But there are about 1 500 residents in our neighborhood, among them 165 children up to six years old, and only one kindergarten and it is closed now. Our mothers are forced to run about Kiev and take their babies there for two months already.

As a result, local people have solved the problem by themselves: they found the exact spot where the water went "on the side", dug a three-by-two-meter pit and one and a half human growths deep and cut the illegal pipe.

- I was asked to help by the residents of the neighborhood. Before they cut the pipe, we called the police department investigation team. They recorded the illegal drainage, then the activists cut the illegal pipe and patched the hole. People who have connections and power live in this street, for example, Franchuk. He has two large plots of land, houses and a stable.

- But you are a deputy, could not you possibly contact the owners of cottages directly and explain the situation?

- They did not open the door. I did all I could, in the end we had to resort to direct actions and mechanically get rid of the illegal pipe. We were on duty near the pit from eight o’clock in the morning for two days in a row, so that nobody from the authorities would come and stop the work. I am not afraid if legal claims, I defend people. It is when there is no water in Franshuk’s pool that he will finally come to the public and negotiate the question.

- Do not you stand for the election to the Verkhovna Rada? Once politicians begin to tackle people’s problems, it is immediately clear that the elections are coming soon ...

- No, I am not running for the elections, I have things to do in the city. It is not me who solved the problem, but the public of Chapaevka. I just helped, called specialists from Kyivenergo, Kyivvodokanal, and Kiivgaz. They showed where their networks are routed to us, so that we would not damage them while digging the pit.

According to Naydenov, the debt of the kindergarden will be paid by the Kyiv administration, and then the Olympic center will make a new contract for water supply.

- My child is three years old. I am studying and working. When the kindergarden was closed, just imagine – there was nowhere to leave the child. I can ask my grandmother, aunt and uncle to baby-sit, but they do not always have time. But there are many moms in Chapayevka who do not have grandparents, and even husbands. Children have been sitting at home for more than two months. If we had not cut the pipe now, frost would come and we would have to wait until spring to solve the problem.

According to the activists, the water should flow through the patched pipe for three more days, the the Sanitary Epidemiological Service will analyze the situation. In the near future, the Department of Health will issue a decree on the resumption of work at the pre-school institution. Probably, the kindergarten will be open next week.