Korchinsky: Putin thinks that the explosions in Ukraine destabilize the power, however they unite it and give extra bonuses to the repressive mechanisms 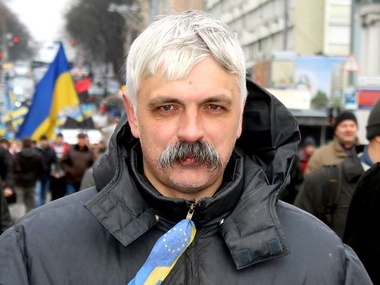 Kernes must be arrested to fight against separatism in Kharkov, Korchinsky believes
Photo: Yan Mednikov / Facebook

The Bratstvo party leader and Saint Maria battalion fighter Dmitry Korchinsky considers that the highest risk of terrorist attacks after Kharkov is in Odessa and Kiev.

The Bratstvo (Fraternity) party leader Dmitry Korchinsky believes that the society is not prepared for fighting against terrorism because the officials who, in Korchinsky’s opinion, are involved in separatist movements have not been arrested. Korchinsky said it in the comment to the GORDON .

"The threat is the highest for Kharkov, Odessa, and Kiev now. Odessa and Kiev must be prepared in the first place" Korchinsky thinks.

"The society is not prepared for the threat of terrorism at all because, for example, the Kharkov mayor Kernes who control the separatist movement in the city has not been arrested. I can see that the explosions in Odessa are used by the local elites to pay off old scores with one another. It means that proper searches, investigation, and struggle are not conducted. The threat in Kiev is high, but there have not been any serious explosions exactly because the mayor is not a separatist," the Bratstvo party leader believes.

According to Dmitry Korchinsky, the Russians follow the way of conflict escalation, therefore further acts of terrorism may be expected, however these actions do not destabilize the Ukrainian power, but, on the contrary, they strengthen it.

"The Russians follow the way of escalation and will continue organizing such things. The situation is paradoxical to some extent, and one must understand the logic of the Russian special services. Some time ago, Putin organized explosions in Moscow to strengthen his power. Now he authorizes explosions in Ukraine to destabilize the Ukrainian power," Korchinsky noted.

"In reality, however, such terror unites the Ukrainian power and gives extra bonuses to its repressive mechanisms. The special services of the Russian Federation and the underground controlled by them must demonstrate effective work. So they demonstrate such work. If they do not kill and explode, there will be a question why they are needed at all. This mechanism of death has been started, and it must keep working," he considers.