Designer Krasnopolsky: We should fight rather than play fixed games with the enemy 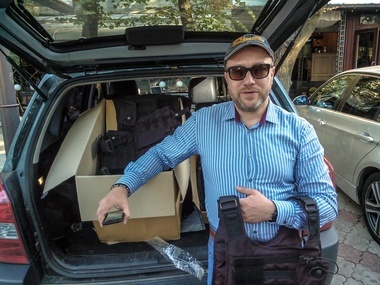 The designer Leonid Krasnopolsky who was in "DNR" captivity said in an exclusive interview to the "GORDON", why he began sewing military uniform instead of elegant men's wear, how a fighter of the Ukrainian army should look like and why Putin’s terrorists did not reach Dnepropetrovsk.

– Leonid, what is the mood of the fighters?

– Very good. They are eager to fight.

– Did you and your volunteers manage to dress many people?

– About one thousand fighters. But we are not volunteers, we are rather employees of logistic support, so to say. Recently we have received an order for tailoring warm trousers, we bought fabric, selected the model, now we are wait for samples from our partners. We organized tailoring of bullet-proof vests. We did not invent anything – we could not do it better than Israelis anyway. We made a copy of an expensive bullet-proof vest and got it sewn at a studio. Many guys are already fighting in our bullet-proof vests, including those at Donetsk airport.

– They say today that there has been less charity to the Ukrainian army after the peace agreements – there is an illusion of peace though the war is actually going on. Is it difficult to get money?

– I have earned my living for all my life, and now I have to ask for money. But I do not feel any psychological barrier. We have never been refused. The phone breaks down already: some goods are delayed, some are paid. Today we have sent a batch of Cellox to Battalion 37 – it is a strong hemostatic remedy. Not so long ago, we sewed backpacks for fighters – a German company gave us an exclusive price. I noticed that people meet you halfway when you ask. So there is an impression nobody asks Europe and the USA to help Ukraine. They only ask for money, but they fear in the West that this money will be stolen.

– Do you consider that the Ukrainian army will not survive without volunteers today?

– It will survive. Did I surprise you? 80% of the army is supplied with everything: salary, clothes, armored personnel carriers, weapons, and ammunition. Certainly, volunteers help very much: they bring sleeping pads, sights, and night vision devices. But we want to become a community, a Ukrainian nation – so we are becoming it.

We know that a soldier needs. A year ago, I would not have cared about a guy from Lviv or Lutsk. And now I care about him: what shoe size he has, whether he needs boots with or without insoles, what parts of the uniform he lacks, whether he has thermal linen. I can even say that I become imbued with his inner world.

– And appearance as well...

– A Ukrainian soldier should not look like a tramp as it was in the Soviet army – miserable caps, off-size uniform. If a soldier is dressed as a winner, he will fight as a winner.

– Living in Donetsk, you started helping the fighters in the spring when the volunteer movement only began. Did you understand how dangerous it is?

– I did. But I wanted to play "war game". I raised money for night vision devices….

– Did anyone in Donetsk responded to the request to help the Ukrainian army? I am asking because it is common to think that only separatists live there.

– In July when I was arrested. They came to my office and told me that someone informed against me to the People's Commissariat for Internal Affairs of "DNR" that I cooperate with the Ukrainian army. They were searching for evidence…

– They did. Fabric, uniform, templates.

– Do you know who informed against you?

– This person did harm to himself first of all. I am fine now, but I do not know and I do not want to know how he lives with it. I was kept for four days at the Security Office.

– It is rather short in comparison with other stories…

– There was a coincidence of many factors. I am grateful to everybody for any help. First of all, God helped me. And, probably, the fact that I was answering the questions correctly.

– Did you manage to let your wife know?

– I was allowed one call. I called and told her what to do. I was released on Saturday morning, on the Sacred Sabbath, and I was in a synagogue by 12 o'clock, was in time to read the Torah. I was given a special prayer for deliverance from danger. It was a real danger.

– Did you leave Donetsk at once?

– Two days later. I was appointed a meeting with Boris Filatov, then Kolomoysky's deputy, at the Dnepropetrovsk Regional State Administration the following day. By the way, he took part in my release, too.

– Did you know Filatov before?

– Not in person, on Facebook. I could not meet the governor, nor his deputies for all my life in Donetsk. And I visit Dnepropetrovsk Regional State Administration twice a week and get support there.

– There is a comment on your Facebook page, "The stalker visited our prisoners. He gave them everything. Thanks to all who took part in our unusual project." Can you decipher it?

– It means that the guys who were considered dead near Ilovaysk and who are now in "DNR" captivity will receive products and warm clothes. We give it for the third time already. It is cold there, in the cellar. And "stalker" because he gets where nobody else can get.

– If there is a new stage of peace talks, maybe, the captives will be released…

– It seems to me that peace talks are a technology used by our president. It seems like peace, but people are killed and we yield territories, on the other hand, we seem to be at war, but he meets Putin and conducts negotiations. The Crimea is seemingly Russian, and the counters are filled up with ROSHEN candies. I did not believe, but my friends even showed photos to me.

– Candies could remain in the Crimea from the "previous" life, right? Everybody criticizes Petro Poroshenko today and give him advice, "He should do this or that way, and he…" In his place, in such an unprecedentedly difficult situation for Ukraine, would you know how to act correctly?

– I am in my place and I know what to do to dress the fighters. Everyone has to do his job. We should fight rather than play fixed games with the enemy.

– You are a sociable person. You certainly have many customers and acquaintances in Donetsk, maybe, even friends who sympathize with "DNR". Do you keep in touch with them?

– Some fight on the Ukrainian side, others – on the side of "DNR". We have agreed not to talk politics with the latter. Many people moved out though. I chose Ukraine, too.