Kravchuk: Things are getting hot for Putin so he sent his emissaries to Kiev - Lukashenko and Nazarbayev 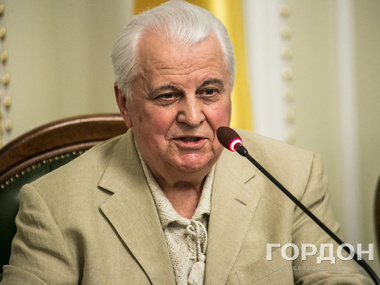 According to the first President of Ukraine Leonid Kravchuk, heads of Belarus and Kazakhstan Alexander Lukashenko and Nursultan Nazarbayev came to Ukraine to find out to what scenarios president Petro Poroshenko is ready for.

The first President of Ukraine Leonid Kravchuk in an exclusive interview with "GORDON" shared his thoughts about the relations between , , and , as well as his vision of the purpose of visit to by President Alexander Lukashenko and Nursultan Nazarbayev and the role of the Russian president in these negotiations.

It is the search of possible decisions to save Putin's face

Nazarbayev and Lukashenko's arrival to is the search of possible decisions to save Putin's face, who is already in his essence and according to the 's history the tsar. And tsars never reverse, they move only forward. These are the searches of a diplomatic and political solution to the problem with the relations with or the real war intermission with it. Putin sees that the situation in and beyond its limits develops not in its advantage. Though pretends that everything is well and he will find the way out. Putin obviously did not expect such reaction of the West on his politics. The last sanctions of Europe and the in fact – full isolation of the . And they, apparently, will increase and increase.

Putin feels that things are getting hot for him. People talk about it in , and it is not only the opposition. That was the reason why he sent his emissaries. They carry out, unfortunately, in my opinion, a role of not independent statesmen. They are under the influence of and under Putin's feet.

Lukashenko and Nazarbayev are under the influence of and under Putin's feet.

I saw how their economic union was being created, concerning which they had to gather in and to sign something there. I saw how artificial it was. Both Lukashenko's and Nazarbayev's statements (addressed to the Russian president and ) that at last they will create such economic structure that will have unbelievable opportunities are wide, deep and high. But thing are the way they are. Now, because of the ruble inflation, they are speaking about hard currency and searching the new markets and the way on how to pay off.

The first purpose is to find out how to overcome the crisis – political, economic and military one. Of course we also do not live in a vicious circle, and the Ukrainian economy is connected to Russian which leaves a trace on it. It is impossible to say that only suffers – we all suffer. And Putin had to take the real first step to finish it. However he will stand his ground so far as he remains aggressive and dictatorial, and he does not refuse it

Lukashenko and Nazarbayev have an assignment from Putin, but they do not refer to him as they don't want to offput him

These are the exact reasons why Lukashenko and Nazarbayev go to Poroshenko. They want to learn his opinion, to what scenarios he is ready for. Now these meetings are not open therefore it is hard to judge. But it is clear that they, except for their own problems, have to discuss some Putin's proposals. Thus they do not refer to Putin not to offput him. These meetings would be organized in a different way if they were state or official. They are like working advisory meetings for clarification of Poroshenko's position. Putin, Nazarbayev and Lukashenko have already discussed their position inside of the economic union. They want to know the position of the Ukrainian president, and to what options, scenarios and concessions he would agree at certain situations.

I cannot absolutely see any concessions to what we could agree because we have already made them. We made more than we could. The concessions are our humiliation because they did not establish a truce. The Minister of Foreign Affairs of the Russian Federation Sergey Lavrov officially declared that signed nothing so there is nothing to discuss. Thus, these arrangements have no such international legal force which they would have to have in order to be signed and ratified as it is necessary in such important question as territorial integrity of .

On the basis of the agreements the resolution will not come, the countries that signed the memorandum have to gather

I insist that the countries that signed the memorandum have to gather. They have to sum up the results, whether the document-assurance of territorial integrity and the sovereignty of is carried out. It has to be, and not ambassadors should arrive, but heads of states who signed this document. Only then it will be possible to discuss anything. All the rest is just procrastination of an outcome.

On the basis of the agreements the resolution will not come. It's not the document we need, it can be manipulated somehow. manipulates it in its own way, so-called "LNR" and "DNR" – in their own way. They already declare that they will not arrive at all, that they want to meet only Poroshenko. They consider themselves to be so important and serious so that they are ready to meet as the state with the head of state. They are mad people. When we go on meetings with them and we pretend that we negotiate, it is necessary to understand that they will not carry out any agreements. That is why my opinion is critical.

Annexation of the has happened already – we swallowed it, though we declare that we do not avow it. But the fact remains the fact. declares that there are the Russian laws and the Russian regime. The council for Donbass is created in . What is this council about? Why it was created? Is Donbass the Russian territory already or what? If they created the council, obviously, they count on something. We know nothing about this council. Does have to communicate with it, or what? Then we will obviously take one more step, agreeing that the part of Donbass was already departed.

I do not want to criticize our governance, as it is having a hard time now, but we didn't work out everything properly within our country, as well as with Europe, the States and