Krivbass battalion fighter Potap: Nobody knew the route when we were leaving Debaltsevo, we were falling into ambushes all the time. There was a feeling that we had been let down 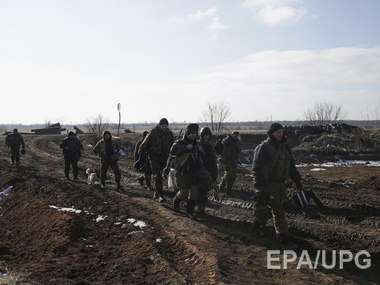 Many soldiers we leaving Debaltsevo on foot
Photo: ЕРА

The squad commander of the investigation company of Battalion 40 with a call sign Potap told the GORDON in detail how the process of withdrawing troops from Debaltsevo was organized, and why, in his opinion, the Ukrainian army had to sustain such damage.

Ukrainian soldiers’ position in Debaltsevo was far from easy from the very beginning, and nobody helped them when the terrorists started a mass attack at the town and there was a need for reinforcement. When the troops were withdrawn, nobody knew the exact route, and there were numerous ambushes on their way. Alexander with a call sign Potap, a Krivbass battalion soldier who took part in the operation and was accused of desertion told the GORDON about it.

Even iron breaks, and a human may break all the more so

When we arrived, we replaced Battalion 25 "Kievan Rus", they were around 600 to 700 people. 330 of our people came instead. And we could compare our forces to the enemy’s. They had night vision sights and infrared imagers – they had everything they needed.

We had almost nothing when we arrived. We only lived on promises. We appealed to Sector C staff more than once. I personally spoke to the commanders and asked for help, because our personnel could not stand it anymore. The guys at the front did a great job, they withstood it all. But even iron breaks, and a human may break all the more so. When one sees that there is no support, one gives oneself up, one lives with the hope for what the unit commander said, "Guys, wait for two or three hours – and you will get everything." And it turns out that there is no support, or it comes as our National Guard came, there were 30 to 40 people, they got under fire and ran away immediately.

The truce lasted for three hours in Debaltsevo. Then the firing resumed. The shelling was dense. Being under attack of the terrorists in Debaltsevo, we asked for help and artillery support – we did not get anything. How did we know that we should leave? With the permission of the battalion commander, we came to Brigade 128 and found out that there was an order to withdraw the troops.

Nothing has changed after Ilovaysk

Nothing has changed after Ilovaysk. Why was it necessary to send troops and infantry to Debaltsevo? To send and forget that there is some personnel, or to shoot it? It is not only the Battalion 40, there were others – the Lvov unit, Brigade 111 and Battalion 43. Separatists had helicopters, and we did not have any air support. Why was it done? Annihilation of personnel, killing of guys who came to defend Ukraine? I wish it did not go worse. How can one consider it? My personal opinion is that this is simply a betrayal and shooting of unnecessary people who can stand up for their city, for their country or to say a word against the government.

The casualties sustained during the withdrawal are still increasing. The central road leading to Artemovsk was blocked 10 to 12 days ago. I would like to see the volunteer who said that she went to Debaltsevo by the Artemovsk road, and said that everything was fine there, that she talked to four units that were not fired, and that everything was quiet in the city. I cannot understand where she went, who she talked to and how she managed to get there. It was just advertising. Somebody benefits when someone tells what has never happened.

Snow on the asphalt, a sleeping mat on the snow, a soldier on the sleeping mat covered with a pea jacket only

We are now in Artemovsk. Personnel was accommodated here who came out of the encirclement. Even hot tea appeared the next day only. We were given four tents without sleeping mats, without mattresses, without sleeping bags. How should the personnel sleep? They slept right on the asphalt. Those who managed to take along a sleeping mat laid it on the asphalt. Snow on the asphalt, a sleeping mat on the snow, a soldier on the sleeping mat covered with a pea jacket only. It is the attitude to those who came out of the encirclement, made a hard way lasting for more than an hour or two. We left at one in the morning and it was 4 p.m. when we reached Artemovsk. We were going under fire. Almost all the surviving hardware was destroyed.

What will happen next? It is all a game of our government, and we are just pawns in it. The separatists will go farther, and will continue killing the personnel that our government does not need. Terrorists will seize other cities if the generals do not think what to do and take right actions, and not as they are doing now. For example, take even General Khomich who led the operation under Ilovaysk: he was made a national hero, even though he killed thousands of people. It will be the same here. They will go on and on. I think that it has all been planned.

They throw soldiers like food for powder. And what are these soldiers? Simple workers. For example, I am a miner myself, I was mobilized. We resist the separatists as they are called, but there are verz few separatists among them. There are forces of the Russian army there, and we have repeatedly fought against them. I can state with confidence that Russia lies when it says that its army does not take any actions in the ATO area in Donetsk and Lugansk regions. They are there, but they are not shown or advertised.