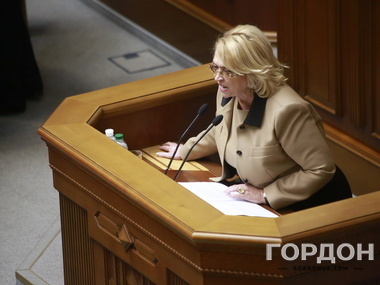 Kuzhel believes that the hryvnia is overrated due to speculative operations
Photo: Aleksandr Khomenko / Gordonua.com

People’s deputy from Batkivshchyna Aleksandra Kuzhel believes that there are no economic grounds for further sagging of the hryvnia rate and that the currency exchange market is feverish due to speculative operations.

Head of the Verkhovna Rada Committee for Entrepreneurship, Regulatory and Anti-Monopoly Policy Aleksandra Kuzhel thinks that the National Bank must hire more experts to regulate the hryvnia rate. She stated this in her comments to the GORDON edition.

"For the ship not to sink, it should not be rocked or steered by a fool. Today, it is not the question of whether Ms. Hontareva is clever or stupid. The point is that she cannot make a governmental decision. It means that she cannot make the correct administrative decision and control the system. Thus, there are no ground for positive expectations. You can feel optimistic when you know that a professional is working. You feel assured understanding that correct administrative decisions will be made. The phrase "personnel is the key" is as relevant as ever", Kuzhel believes.

"We have a very grave situation with the deposit insurance fund, it is terrific. They should expect up to $37 million while they only have 6. We understand that if 37 000 000 queue up, 70 to 80% of the banks will be in a pre-crisis state. Money we receive from the IMF are forwarded to refinance the banks. If Hontareva forwarded $3.5 bln for refinancing Yanukovych’s and Kurchenko’s banks, what hryvnia supplies can we talk about?" added the deputy.

According to Aleksandra Kuzhel, reasonable use of the IMF funds by the National Bank is questionable.

"People cannot pay their loans because the Verkhovna Rada does not pass the law at the second reading (law on conversion of currency loans into hryvnia. – GORDON). They cannot buy dollars at the rate 15. At the same time, the NBU allows banks receiving IMF funds to extend the refinancing terms. These are the same banks that siphoned up to 200 billion hryvnias abroad under Yanukovych, it means that we are now facing the same situation as Yushchenko had with Stelmakh in 2009, when they gave money to the banks rather than refinanced them, and we were saving people who deposited their money, but it did not bring any stability", Kuzhel stated.

The politician thinks that there are no objective grounds for the growing dollar rate in Ukraine, it is all due to speculative machinations.

"Both the prime minister and the minister of finance and all analysts confirm that there are no economic grounds for an increase in the dollar rate. Imports have dropped, we have trade surplus. It is quite clear that this is all due to speculative operations. That is why the economists are right saying that it is no use threatening the bankers, the rate will not be stabilized this way, we only need professional decisions," Kuzhel believes.

"Moneychangers have reappeared. Someone has organized this on purpose, right? It was believed ten years ago that moneychangers would never reappear in Ukraine, while, according to the Ministry of Internal Affairs, over 100 of them have been killed recently. It did not benefit the national currency stabilization policy, though somebody made big money. There was demand so there was proposition immediately. That is it. Those who need can get currency. And people who cannot afford buying at such a rate are bound to suffer if, for example, they need to pay a loan. There is even a joke that Hontareva summoned all bankers because she needed to buy $3000 at a time. The situation is foul," commented the people’s deputy.