Lazareva: All my friends and relatives who live in Ukraine – I beg your pardon. I am very sorry for my country 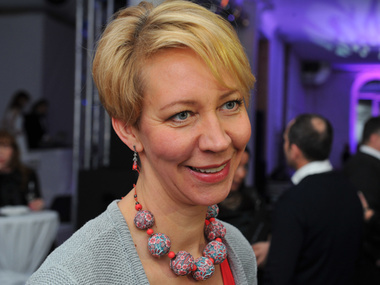 The Russian actress and TV presenter Tatyana Lazareva said in an exclusive interview for the GORDON edition why she had not quarreled with any of her friends, that Andrey Makarevich is still persecuted in Russia and that the Russian authorities do not hear ordinary people.

After participation in the Peace March, Tatyana Lazareva wrote on her Facebook page, "Our government provoked this war and these deaths, and we have elected this government "

In the beginning of May, there appeared a brief but a very meaningful note in the Live Journal of the actress and TV presenter Tatyana Lazareva:

"I am immensely grateful to those who still differentiate between Putin and the other Russia, between George’s ribbon and the Victory Day. The Victory Day is common with Ukraine. The ribbon is not. I do not understand how you manage to have so much wisdom and composure. But I am tacitly grateful to you. And I beg a pardon. I was not able to do anything. All my friends and relatives who live in Ukraine – I beg your pardon. I am very sorry for my country. And I an very much afraid. For both our countries. Very much".

On 21 September, Tatyana Lazareva and her husband Mikhail Shats took part in the Peace March in Moscow and then shared her emotions in Facebook:

"People were walking in silence. And in gloom. Well, there are ever fewer reasons to be happy, it is true. We can only walk, we have been deprived of other ways to control the situation. The latest elections demonstrated that the government have gained their way – very few people believe in their involvement in decision-making. In the meantime, people are dying in Ukraine, and it turns out that we are all involved in what is happening, it is our government that provoked war and these deaths, and we have elected this government".

Live Journal, Facebook… Only social networks and kitchen talks are left for those who do not accept Putin’s policy today. Though their posts are reviewed not only by like-minded persons but also by vigilant censors, and if the author’s impudence is beyond the limits of decency, his or her page is just blocked. At the same time, the Russian kitchen, like in the Soviet times, appears the most reliable place to speak about forbidden topics, including the involvement of Russia in the war in Eastern Ukraine.

Prominent Russian actors, directors and even oppositional politicians often refuse to give comments or interviews to Ukrainian editions despite the fact that they do not support Putin’s policy towards Ukraine. One thing is not supporting, and quite a different thing is expressing oneself in editions of an unfriendly country, to put it mildly.

Tatyana Lazareva did not refuse the GORDON . She supports the idea that people should think for themselves what is going on in Russia. As long as several years ago, addressing the participants of the demonstration on Bolotnaya Square, she said, "If you have come here, you have a head on your shoulders". Neither she nor her husband Mikhail Shats ever miss demonstrations. It is one of the few opportunities for them to express their position. When the Russian STS channel closed down their TV program called Good Jokes, Tatyana, Mikhail and like-minded colleagues launched a new Internet project called Television on the Laps; its motto reads “It is better to make television on the laps than on the knees».

People’s confidence that they cannot influence anything grows with every elections.

– Tatyana, though according to the official information, no more than five thousand Muscovites took part in the peace march, witnesses say that there were tens or even twenty times more people. What do you think would it help to stop war in Ukraine if peace marches were not occasional but became a large-scale public movement forcing the government to take into consideration the Russians’ opinion?

– Unfortunately, the government responds to neither the quantity nor the quality of peace marches or demonstrations on Bolotnaya Square. The peace march in September was not broadcast on central channels at all. I think at times that these methods have exhausted themselves. We rather do it for ourselves… В There is no dialogue with the government in Russia, and there is less and less hope that they will take into consideration the public opinion. People’s confidence that they cannot influence anything grows with every elections.

– Probably, when Russian soldiers are killed in the undeclared war, while many of them did not even know that they would have to fight in Ukraine, every voice counts. Soldiers’ mother must be crying the loudest…

– I do not think that the government will hear ordinary people interested in the cessation of this war. The external reaction will rather play its part – the world community takes Russian actions rather seriously. And we are doing what we can.

There is only one point of view, the other one that Andrey Makarevich, my friends and I stick to is persecuted

– After you admitted in the Live Journal that you are sorry for your country, was it more difficult to get along with your friends and colleagues who have another point of view?

– Thank God, I am surrounded by nice people who share my point of view. However, even if it is not in line with somebody else’s one, we are wise enough to avoid this topic.

– The story with Andrey Makarevich’s tour to Donbass ended in his persecution. He now cancelled his concerts in Ukraine, referring to a “medical procedure” on his Facebook page…

– … I think, this story is not over for him yet; even if has cancelled his tour in Ukraine, he still lives in Russia, and the persecution is at its height.

– On the other hand, the singer Vika Tsyganova who made a rollicking video with one of Novorossia leaders Gubarev, was not condemned by the  Russian authorities for supporting terrorists. "Russia has its interest from Donetsk to Odessa", she sings without confusion that she opens Putin’s cards. The actor Aleksandr Bashirov takes photos together with terrorists, and his colleague Sergey Makhovikov went to Donbass as a member of the so-called group of Russian cultural figures with an allegedly humanitarian mission to support Novorossian fighters, he performed songs of Vysotsky and Okudjava, defacing the memory of poets with whom many decent people associate their lives. Maybe, these actors do not have time to understand who is who with their tight filming schedule. Or it is enough for them to earn cheap popularity with the Russian viewers?

– I do not know the names of actors you have just mentioned, but they are bound to be not so significant as Makarevich. Everyone has the right for his own point of view. But I am not happy that there is only one point of view, the other one that Andrey Makarevich, my friends and I stick to is persecuted.

– It is sad. Probably, only irony helps overcome what is now happening in Russia?

– Well, irony does no harm for sure. But not always: what Russian people used to joke at has now turned into a disaster. We do not feel like joking anymore.