Lozhkin signed an Agreement with the American Jewish Committee 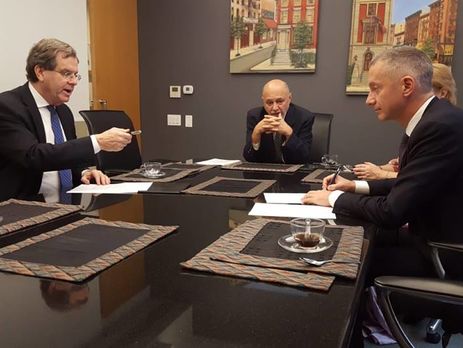 Lozhkin (on the right) was elected president of the Jewish Confederation of Ukraine in May 2018
Photo: Борис Ложкин / Facebook

The President of the Jewish Confederation of Ukraine Boris Lozhkin noted that the first joint projects of the organization are expected to be presented next year.

On the September 26th in New York, the President of the Jewish Confederation of Ukraine Boris Lozhkin and the CEO of the American Jewish Committee David Harris signed the Agreement of Association between the two organizations, Ukrainian News reports with reference to the Confederation.

“We enter into the association in furtherance of our respective institutional goals and a spirit of mutual respect, appreciating the considerable experience, capability and dedication of each party, and the natural synergy of our organizations, interests and activities,” states the Agreement.

The American Jewish Committee is one of the oldest and most active Jewish human rights organizations established in 1906 to combat anti-Semitism and protect the rights of the Jewish population of the United States. The President of the Committee is John Shapiro.

In 1991, AJC was the first international Jewish organization that called on the President George H. W. Bush to recognize Ukraine's independence. The committee has supported free and democratic Ukraine since then.

The signed Agreement foresees preservation of autonomy and independence of each party with routine exchange of research, analysis, publications, archival data and other material. On all matters of common interest, each organization will endeavor to collaborate on an ongoing basis, which may include joint sponsorship of research and publications, conferences and exchange programs.

Both organizations seek to strengthen Jewish communal life; advocate for Jewish concerns around the world; enhance security and strengthen Israel’s diplomatic relations; combat anti-Semitic and other hate groups in their societies, strengthen the forces of democratic pluralism; promote memory of the Holocaust; counter the influence of Islamic extremism and other movements, inimical to the security and welfare of the Jewish people; encourage greater dialogue and understanding within the Diaspora and between Israelis and Jews in other lands.

Harris called the signing of the agreement as a logical continuation of the long-term cooperation. Lozhkin noted that the first joint projects of the organization are expected to be presented next year.