Malomuzh: There can be up to several tens of secret agents of the Russian Federation in the army leadership 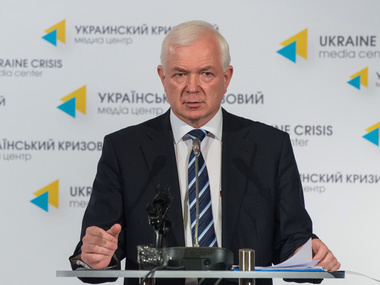 Malomuzh believes that there is no systematic in the struggle against espionage
Photo: uacrisis.org

The chairman of the Foreign Intelligence Service (2005-2010) Nicholay Malomuzh believes that currently there is no effective and systematic work on the fight against espionage.

The former head of the Foreign Intelligence Service Nikolay Malomuzh believes that Russian agents operating in on two levels - strategic and at the grassroots level in the army. He said this in a comment to "GORDON" .

"There are different kinds of agents. There are agents of the strategic level, the existence of who we can judge by the way the was delivered, and what we have lost. These agents are still not fully revealed by the SBU, as the SBU lacks the capacity to do that. The fact that we have such serious consequences - it is also a flaw of counterintelligence, which must have been carry out a more efficient operation, "- Malomuzh stated.

"At the lowest level, there are officers who did not reveal themselves to a certain point, but now that time has come. Now there is a revitalization plan of the enemy and the formation of a strong network of agents in the armed forces for disruption of our work, for system information, for determination of the means and aims of our Armed forces. Also, we are working to define our plans for military operations and to identify our enemy firing points. These are comprehensive measures, "- said the expert.

"Because of these agents, mostly because of their technical intelligence, we had a lot of problems, especially when our troops came to the rescue, but due to the release of information about our strategic plans the enemy delivered counterattacks," - says Malomuzh.

"The enemy was able to find out at the strategic level about our plans and intentions, to get information about what is happening on our front and what we would get from our partners from NATO and the . This strategic information that can be obtained only by people of appropriate level "- said the former head of the foreign Intelligence Service.

According to Nikolay Malomuzh, counterintelligence should carry out comprehensive and systematic measures to combat espionage.

"If we're talking about the central military structures, then we can talk about a few dozen of people who are highly undercover. They need to be identified through comprehensive measures. Every officer can under the guise of personnel work can be examined by a polygraph. This is one of prevention, but effective action to identify such people. This is a huge secret-service and technical work, "- Malomuzh added.

"At the moment there is no such effective work. We only have some moments, and they are a bit primitive. For example, a lieutenant colonel was identified who provoked people to mass demonstrations. But it is quite possible that it was just an easy target, lying on the surface, and distracting because there are a lot of other highly undercover agents. Such people are not only among the officers, they are in and , and very often they work both on ideological as well as on a financial basis, "- the expert concluded.