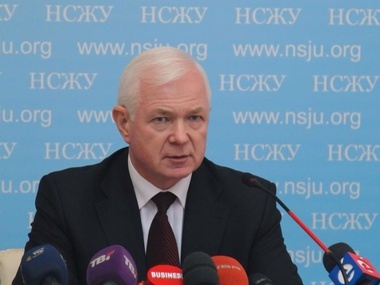 Nikolay Malomuzh: Of course, we could not predict war with certainty. But we conceded that the confrontation between Russia and the West can take a very tough form in our territory
Photo: Nikolay Malomuzh / Facebook

Former Head of the Foreign Intelligence Service of Ukraine and General of the Ukrainian Army Nikolay Malomuzh explained in an exclusive interview to the GORDON how Russia was preparing the seizure of the Crimea as far back as in the 1990s, whether the war in Donbass could have been averted and when Yanukovych planned to return to power.

A video fragment from a release of the “K Barieru” (A Duel) program on the Russian NTV channel was uploaded to the Internet not so long ago. The program that is actually a TV duel featured two persons: the deputy of the State Duma Konstantin Zatulin and former Minister of Defence of Ukraine (from 2005 to 2007) Anatoly Gritsenko.

The subject of a heated discussion was Ukraine’s desire to join the NATO, which was considered by the Russian opponent as a betrayal of one fraternal country towards another one.

At the end of the program, its presenter Vladimir Solovyov told Anatoly Gritsenko:

"Breathe a little more. Until we get around to your Crimea and eastern Ukraine…"

ВИДЕО
The journalist Vladimir Solovyov warned the Ukrainians in the "K Barieru!" program as far back as in April 2008, "Breathe a little more. Until we get around to your Crimea and eastern Ukraine." Video: Dom odnoklassnikov / Youtube

The odious Russian journalist Vladimir Solovyov, one of the most notorious Kremlin propagandists, has repeatedly insulted our country for the period of the Russian-Ukrainian war.

But the point is that the TV program whose fragment is cited above was released on April 3… 2008. It is stupid to think that it is by chance that Solovyov’s warning and further historical events have coincided.

The journalist honoured by the Russian government and decorated with the Order of Alexander Nevsky "For high professionalism and objectivity in highlighting events in the Republic of Crimea", in April 2014 was certainly receiving guidelines at the closed ideological meeting in the Kremlin regarding what to say and what not to say.

A well-known journalist said at the broadcast of the central Russian TV channel six years before the occupation of the Crimea and the war in Donbass, "Breathe a little more…", it means that Russia has been seriously elaborating plans for invasion of Ukraine for a long time.

The former Head of the Foreign Intelligence Service of Ukraine from 2005 to 2010 and General of the Ukrainian Army Nikolay Malomuzh confirmed it to the GORDON .

Attempts at destabilizing the situation in the Crimea intensified after Putin came to power; he imagined himself a gatherer of the Russian lands and was looking for a good time

– Nicholas Grigoryevich, does it turn out that Russia has been preparing to seize Ukrainian territory since long ago?

– Russia had plans to seize the Crimea by non-military means in the early 1990s, when a referendum was going to be held with the help of Russian agents, and the so-called "president" of the Crimea Yury Meshkov was supposed to address the leaders of the Russian Federation with a request to annex the peninsula to Russia.

For quick prevention of this scenario, we took a series of powerful events. We had to gather special agents and the Alpha group, to involve internal troops, to call border guards to Kerch, and to get involved other special forces to prevent the situation from developing.

There were also further attempts to destabilize the situation in the Crimea. They were especially active after Putin came to power; he imagined himself a gatherer of the Russian lands and was looking for a good time for this, expecting that the majority of the Crimean citizens will support joining Russia.

– In the "K Barieru!" program in 2008, the State Duma deputy Konstantin Zatulin called the policy of rapprochement with the NATO a betrayal of Russia. And why is it a betrayal?

– The aim of Putin aim and his team was constant political and economic control over the territories of the former Soviet republics. From Putin’s point of view, Ukraine as a partner and Russia’s "younger brother" has no right to independent movement to the European Union, or to cooperation with the NATO. Russia wants to control the situation in Ukraine both through economy, and through finance, and through defence, but in particular through shadow economy.

Realizing that Ukraine can get out of control, the Russian government decided to annex the Crimea, thereby hoping to force us to give up accession to the NATO by very powerful political pressure and instability in the country.

– Here's another Zatulin’s quote from the same program, "We will have to revise our military strategy." The argument for this threat was not only Ukraine's course towards rapprochement with the NATO, but also the order of the Minister of Transport of Ukraine concerning the ban on broadcasting Russian-language songs in Ukrainian trains. This order remained in force for only a few days, but the Russian political technologists exaggerated everything that could create preconditions for a future conflict. Did mistakes of the Ukrainian leaders in the question of language play a significant role in it?

– We must exercise caution when dealing with language or other sensitive historical issues. A wise country leader will never aggravate topics that may create problems in relations with the neighbouring states. And Russia has always been sensitive about issues of oppression of the Russian language or culture. There was no need to give any reasons for confrontation.

– As the Head of the Foreign Intelligence, could you assume that Russia, speculating on the language issue, could be so impudent as to seize the Crimea and break out a war in Donbass?

– Of course, we could not predict war with certainty. But we conceded that the confrontation between Russia and the West can take a very tough form in our territory. We knew about Russia’s political plans: to gradually take control of economy, energy, and defence, to transfer the financial system to rouble. We also knew about the ultimate goal that consisted in political influence in Ukraine through the president of the country who would be suitable for Russia. It was Yanukovich who won the presidential elections in 2010.

– In your opinion, did the Ukrainian leaders make many mistakes after Yanukovych’s flight in March 2014 when the Russian provokers were just beginning to destabilize the situation in Ukraine?

– Both the Ukrainian leaders, and intelligence agencies, and law enforcement agencies - all of them made a number of strategic and tactical mistakes. After Maidan, predicting the possible development of the situation, we suggested to our leadership that a centre should be created that would include high-level professional security agents capable of estimating the level of security threats in the country.

I reported to the Ukrainian leaders about the possible scenarios of the Crimea being annexed to Russia, knowing that Vladimir Konstantinov, who was then the Chairman of the Supreme Council of the Autonomous Republic of Crimea went, to Moscow where he decided the fate of the peninsula. But there was no proper estimation of the situation. Also, Yanukovych was not detained – he was let go deliberately.

ВИДЕО
Using CCTV cameras, the TSN reproduces the chronicle of Yanukovych's flight from the country. Video: "1+1" / Youtube
I was called by the mayors of Crimean cities who asked me, "Do something! If Russia comes here, we will not be able to do anything." But appeals to the country's leaders remained unanswered

But the centre did not give any instructions, local security forces were at a loss, in general, there was complete disorganization. I was called by the mayors of Crimea cities who asked me, "Do something! If Russia comes here, we will not be able to do anything." But appeals to the country's leaders – both direct and through the press – remained unanswered. Gradually we were losing control of the situation until Russian special services and troops came to the Crimea, the so-called referendum was held. 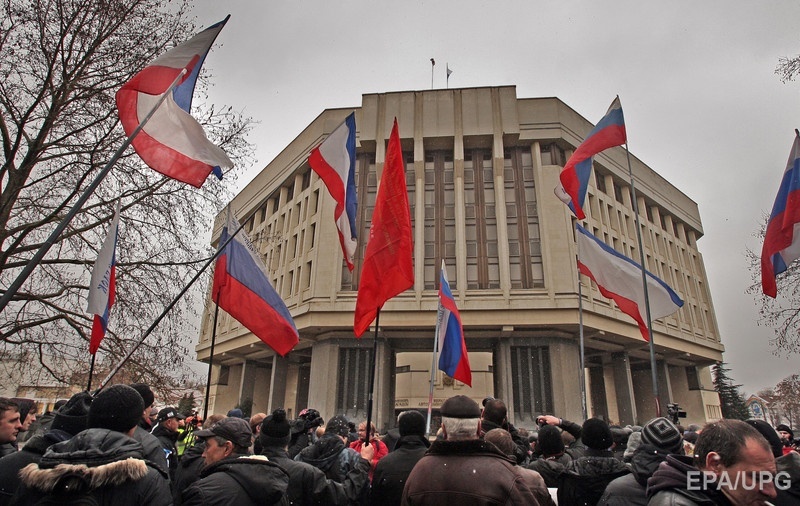 Nikolay Malomuzh: "I was called by the mayors of Crimea cities who asked me, "Do something! If Russia comes here, we will not be able to do anything." But appeals to the country's leaders remained unanswered." Pro-Russian demonstration near the building of the Crimean parliament. February 2014. Photo: ARTUR Schwarz / ЕРА

– Was it possible to avert further events in Donbass?

– During the Crimean events, I insisted that work should be started in Donbass as long as it was relatively quiet there, although the Russian informational propaganda was already working there, and the locals were told that "fascists" will come and kill them soon.

I met heads of enterprises, factories, and mines – they complained that the­y were labelled as separatists, but in fact they were open for a dialogue. We have developed a series of measures that could have easily settled the situation, the Security Service in collaboration with other structures should have acted just as 20 years ago in the Crimea, identifying extremists and saboteurs from the Russian side. Of course, it would not have come to war in this case. 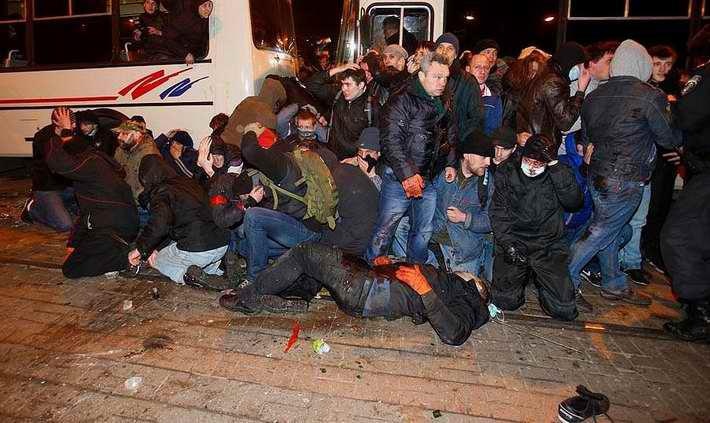 One of the participant of the peace demonstration for united Ukraine was killed in Donetsk on March 13, 2014. Photo: censor.net.ua

Donbass citizens are largely blamed now, although responsibility primarily rests with the management of the country. Protection of its citizens is a sacred duty of the state. And once it failed to do so, the government should have resigned.

I have spoken to the state leaders of other countries and heard the following words from them, "If our country had lost at least an inch of land, our government would have resigned." Ukraine has been losing both land and people for the past year, and there are no conclusions.

– Do you think that Yanukovych planned to return to Ukraine through Donbass?

– Yes, he did – he was involved in the scenario aimed to destabilize the situation in Donbass. His associates persuaded Putin that Yanukovych was the top-ranking politician in Donbass and that he would have support there. They wanted to create several republics in the southeast, then to destabilize the situation in the centre of Ukraine and then bring Yanukovych back to power. This plan was being elaborated, but they failed to raise a large-scale uprising in the southeast.

– Are there many Putin's agents in Ukraine? Are they in power, too?

– Yes, and it is one of the reasons why we lost the Crimea, why there is war, and why we surrender positions. The press sometimes publishes information about some arrests, but they are only small figures. Those who decide on the strategy have not been exposed, and nobody tries to do it because they themselves are controlled by the new government.

– Why does Ukraine produce so little obvious evidence of Russia's involvement in this war?

– There is purely operational information, but it is not sufficiently verified or documented from the legal point of view. And all the facts assessed by the international community and investigating authorities must undergo a procedural assessment. I am a lawyer, and I understand that there must be evidence for every provision. 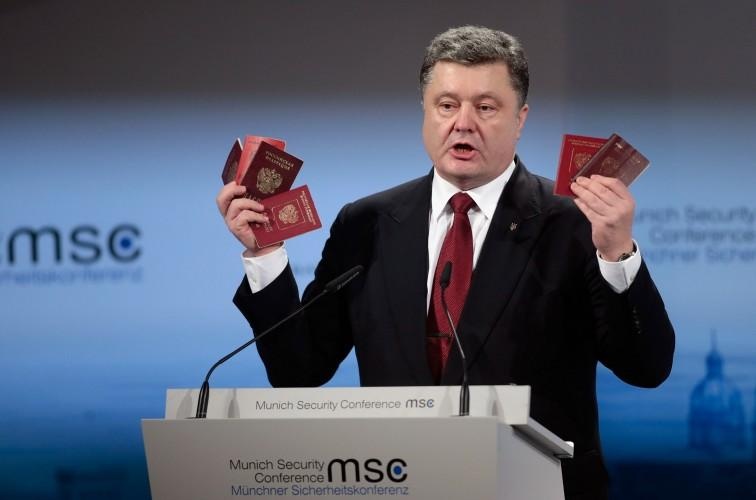 – The war continues despite the peace agreement. If they do not work even with the participation of such high intermediaries as the French President and the German Chancellor, does only war remain?

– Ukraine has no prospects in case of war. We need to go to the G20 level to resolve the situation under strong international control. It does not work at the level of the Minsk accords. Aggravation of the situation from either side, including ours, is unacceptable.

All peace initiatives should be expressed by us – not by Russia, not by the West, but by Ukraine. Certainly, provided strong positions of our military along the demarcation line. And then we should get the West involved and force Russia to a peace process. There is no other choice. Otherwise, there will be a large-scale war.