Mironenko: Gorbachev will understand with time on whose side the truth is. He worries for Ukraine very much 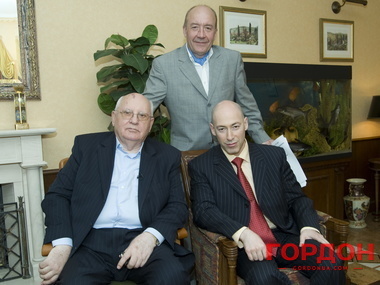 The adviser of the President of Gorbachev Foundation Viktor Mironenko, former First Secretary of the Central Committee of All-Union Leninist Young Communist League of the USSR, historian, disproved information on the death of the ex-president of the USSR in an exclusive interview to the GORDON and said what prevents Mikhail Gorbachev from assessing the situation in Ukraine correctly and why he cannot influence Putin's policy.

– Viktor Ivanovich, we do not want to trust unscrupulous mass media. What is wrong with Mikhail Sergeyevich?

– And what is wrong? Perhaps, I missed something.

– They write that he has died …

– Again? I met him at Gorbachev Foundation at the conference timed to the 25th anniversary of the fall of the Iron Curtain just yesterday. Mikhail Sergeyevich stayed there for no less than three hours, he delivered a long report, actively participated in the discussion. I was glad for him. He looked perfectly.

– Thank God, he is alive and well…

– Well, you cannot say that he feels perfectly well. Of course, age and diseases take their toll. And as for the rumors about his death … He told me himself, "Familiar journalists often call me on the cell phone and ask, "How are you, where are you?" I answer, "I am in bed, in hospital". And they draw a conclusion from this short answer that I am in a nearly critical condition." He jokes with his usual sense of humor, "Do not count on it." He says that he feels his age. Unfortunately, however, his health has not been very stable over the recent years.

– Many clever people were bound to gather at the conference at Gorbachev Foundation. Did you speak about Ukraine?

– Yes, and long enough. In general, everybody agreed that a big fault for the Ukrainian tragedy lies on the Russian government that violated a number of international agreements. We said that we can treat the situation in Ukraine in different ways, but there are rules that must be observed. We thought how Russia can get out of this situation and came to a conclusion that the way out would be very complicated. We remembered the period when two parts of Germany were united – the Western Germany as a stronger and richer state actively helped the eastern part. It took enormous efforts and investment. And even if we agree that Russians and Ukrainians are one nation and the Russian people have a desire to get united, we should help Ukraine rather than set new prices for energy and then even take aggressive steps.

– People in Ukraine did not expect Gorbachev to support the Russian aggression against our country. You know him well – could not he know the how and why of the things?

– Yes, I know, many people in Ukraine took offence of him. Mikhail Sergeyevich has a peculiar attitude towards the Crimea: he considers that the referendum did take place and that the main thing is people’s will. From his point of view, Western partners are light-fingered. But he worries for Ukraine. Though he is a Russian person deep inside, but he is half-Ukrainian – on the maternal side, by the way, I am half-Ukrainian, too, but on the paternal side. I personally think that he spends too much time at home in front of the TV, and the Russian television can create a wrong idea of the situation in Ukraine even in the most lucid mind. And his communication is very limited now.

– You certain communicate with him more than anyone else. And you have an absolutely different position. Do you argue with him?

– We do. And he agrees that Ukraine, unlike all other former USSR republics, is searching its way. And this search is very difficult. And everything went too far in the relations with Russia. It is possible to get out of this situation in one direction only – towards freedom. But freedom assumes responsibility, and the Ukrainian authorities do not have enough tools for this and much more. Still, Gorbachev and I agree that even if Ukrainians do something wrongly, we as perestroika participants cannot judge them.

– Perestroika was also a revolution, the only difference is that it passed without blood. He ought to understand that Ukraine is getting out of a cave to the light, to that civilization where Gorbachev once sought to bring the Soviet Union …

– Mikhail Sergeyevich is certainly deeply worried that reforms which he was carrying out were disrupted. He considers that it Ukraine is partly to blame for this – and has ground to think that. After all, we remember well what was happening in Ukraine during those years. Probably, Ukrainians did not understand these reforms, did not fully believe in our intentions. 25 years have passed since the perestroika, and Ukraine is still looking for its place. Gorbachev wants it very much that it should found its way. Believe me, for everything good he has done, he can be forgiven his views that are not clear to Ukraine and not too pleasant for it. But I repeat that they are mainly caused by his one-sided information. It is very hard to understand what is going on in Ukraine today.

– Probably, it is hard. But he is a humanist – otherwise, having come to power, he would not begin perestroika that gave people freedom, but would rather tighten the screws. People are dying under Russian attacks in Donbass. Thousands of people – both civilians and military men. How can one treat it "loyally"?

– Gorbachev himself always sought for minimization of victims and for a peaceful resolution of conflicts. And I keep convincing him all the time that it is necessary not only to judge the facts, but also understand who began the first and who had what kind of motivation in order to understand the essence of this conflict. It is just as important. He has great expectations for Ukraine and he worries for it in a way. Both for Gorbachev and for me, the war in Ukraine is not far and alien. It is in us, in our hearts. I think that Mikhail Sergeyevich will surely understand with time on whose side the truth is. And Ukraine needs to continue doing what it is doing: looking for the right way out. I personally feel respect to Donbass. Unfortunately, nomenclature failed there. It was them who stirred up all the trouble, and it is them who are to hold responsible for it. Though you cannot return the dead… Accept my most sincere wishes: may everything get better, and may Donbass people come back home. I believe in it.

– If Mikhail Sergeyevich met Putin as a person with rich life and presidential experience who deserved huge authority by right and has not lost it, no matter what people think of his reforms today, what if he met him and said to him figuratively, "Volodya, you are wrong", could it help to stop the war?

– I seriously doubt the ability of our leader to perceive somebody else’s opinion. And after all, Mikhail Sergeyevich is kept away from Putin. In 2001, when Bush Jr. was elected the U.S. President, and Putin became the president of Russia, some people from the new Russian president’s team was preparing another Cold War. These are people who receive money from the military industrial complex – both in America, and in Russia. They are always interested in the international tension, in some conflicts, which results in increased public expenditures for the military, and these people earn big money. It was then that the plan was developed that, according to its authors, had to result in the growing tension between Bush and Putin. But Gorbachev interfered, and this plan was disrupted. Since then, people from Putin's environment actively try to isolate Mikhail Sergeyevich from him. Their political paradigms differ too much. Gorbachev defends idealistic positions adhering to morals in politics, considering that the world has to change for the better in terms of freedom, democracy, and respect of human rights. Putin sticks to the position initiated by Yeltsin, that is, so to say, a nomenclature, conservative line though a little updated. He and his environment, in my opinion, play old geopolitical games in which the politics relies on force above all. Therefore, it is difficult for Mikhail Sergeyevich to influence the current Russian administration. He himself is under its influence to some extent.