Moskal: Guerillas produce nothing, and the people must be feed. Hunger, poverty and ruins in "LNR" – the best ukrainizators 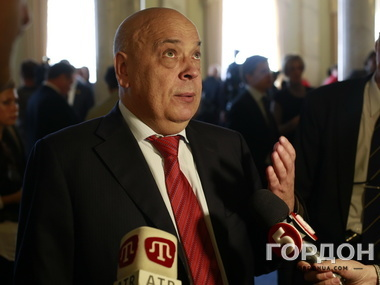 The head of Lugansk regional administration Gennady Moskal told the GORDON about why Donbass needs a free economic zone, why inhabitants of occupied territories will revolt against guerillas and for what Russia needs hunger and poverty in separatist "republics".

The current head of Lugansk area Gennady Moskal has a wide experience of work in public service and knows firsthand about advantages of the mode of a free economic zone which the president Petro Poroshenko suggested to give to the region. About what future waits for Donbass and why it should return to structure of , Moskal told the GORDON edition.

Coal comes to from "LNR". And what will they live on? On buttons?

I support such economic zone. When I was the governor of the Zakarpatye area, we had the particular economic regime and there was a line of people interested in making business. Zero duties on import of production, other preferences – all this can attract the investor to Donbass. And without investments we won't be able to restore it.

For example, today coal comes to the from "LNR", and nobody blows up bridges or railway tracks. Nobody plunders anything, and it arrives accompanied by protection to our border. What will they live on? On buttons? If they develop nothing there, they will die together with all the moronic projects about "Novorossiya", with the "Russian world" and other nonsense. Classic authors taught us that the basis is primary, and the superstructure is secondary. One superstructure will only get you so far. We can criticize Marx, but in some questions he was right, and he was the first to expect crisis of a superstructure.

The situation holds on fear there. But it can't go on for long

And the same is there – there cannot be only guerillas. They produce nothing, and civilians need to be feed, therefore the people will sweep them away sooner or later and will put a fat point on the Novorossiya project. Hunger, poverty and ruins which are in "LNR" today, are the best ukrainizators. As one Russian classic said: "When the person eats sturgeon with a horse-radish, he wants democracy. And when the democracy comes, he looks for sturgeon with a horse-radish". They already understood that they go on a pipe which is welded and sooner or later they will bump into the dead end and will understand that there is no place to go further.

The situation holds on fear there. But it cannot go on for long. For example, there was a fear of Party of Regions, but after all it was gone. Therefore if they do not become reasonable and will not stop attacks, remember my words, they will be moved away from there. They have to start thinking of economy, to start understanding that cannot survive alone, from the economic point of view and it is necessary to go back and to unite.

In Lugansk area at the time of the beginning of ATO there were one million four hundred twenty thousand hectares of the land which was suitable for agricultural works. In the territory of "LNR" there are only 70 thousand hectares. Can they support on these lands their own people? There are only urbanized territories. There are such cities as Lugansk, Alchevsk, Krasny Luch, Bryanka. From where will they take the food? From ? has its own big problems. You should visit the city of that borders with , and you will see one Russian car plates. Only Russians are in the markets. The food is much cheaper here, even despite of the war. We complain about the life here, but Russians come and buy food, food and clothes here. Office workers of those districts of Russia who are near Melovoe come every day for lunches because it is three times cheaper to have dinner here, than in Russia.

They say to their citizens that if those want to go on , they will live the same as in "LNR"

does not need prosperity of "LNR". The separatist republics have to be those phobias which each citizen of the must have. They want people to see what they will get if start revolting and opposing the Kremlin. is interested in hunger and poverty there. They need pictures for federal channels. They say to the citizens that if those want to go on , they will live the same as in "LNR". Only for this purpose the Orthodox Christian kills the Orthodox Christian, the Russian kills the Ukrainian, the Russian kills the Russian. If they want to turn their land into during Polpot's regime, let them act.