MP Vysotsky: Those who deny the occupation of Crimea should be brought to trial

"Fifth Column" in the Donbass dreams about the arrival of Putin and sabotages the official decision of Kiev, said MP from the "Narodnyy Front" Sergey Vysotsky. 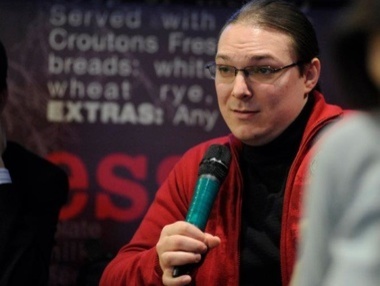 Vysotsky: The criminalizing criticism of the authorities bill should be modified
Photo: Polit Club / Facebook

People who reject the occupation of the Crimea and call the war of Russia against Ukraine "internal conflict" should be brought to trial. Such an opinion to "Gordon" was expressed by MP Sergey Vysotsky.

"I personally advocate the criminal responsibility of those who deny the occupation of the Crimea, and call Russia's war against Ukraine an " internal conflict "or civil war. "People who say so, should be checked for the presence of ties with the Russian special services. As for the Mateychenko’s bill, it needs to be modified to be directed not against criticism of the Ukrainian government, but against the people working for Russia, "- said the MP.

According to him, the hype around the bill on the enaction of criminal sanctions for criticizing the government is unnecessarily.

"This is not about censorship in Ukraine. The government can and should be criticised, but the buzz around the Constantine Mateychenko’s bill "On Amendments to the Criminal Code of Ukraine (concerning the protection and preservation of the authority of the state) "a little heated. By submitting his bill, Kostya was guided by good intentions because the person sees how the Ukrainian authorities in the Donbas (even in the liberated territories) are completely sabotaging local officials and security forces, "- said Vysotsky.

The document, according to People's Deputy, will be sent back for revision.

"We must clearly understand who is Mateychenko. He is not just the MP from the faction of the “Narodnyy Front ", he is the real hero of Ukraine, the battalion commander of "Artemivsk", born in the Donetsk region, personally affected by the regime of Yanukovych. Kostya fights for Donbass, protects the Ukrainians in the occupied territory. He fights not only as a military officer, but also as a parliamentarian. Kostya sees among officials and security forces of Donbass representatives of fifth column who dream about the coming of Putin, and therefore sabotaging decision of official Kiev. Naturally, the battalion commander and MP immediately registered the bill, not perfect one, but needed. We are well aware that in the current form the document cannot be accepted, that’s why we ask Mateychenko to withdraw the bill for further development. It is necessary first of all to legally define "collaboration", concluded Vysotsky.
Tags: Donbas, Sergey Vysotsky, government