Nemtsov: Putin is inadequate, but the instinct of the retention of power can stop him 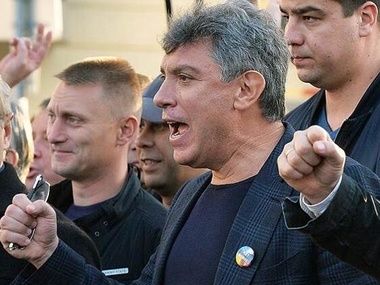 Nemtsov considers Putin to be inadequate, but leaves hope for agreement with him
Photo: Vladimir Kara-Murza / Facebook

The chairman of the Russian opposition party RPR-Parnassus Boris Nemtsov hopes that French President Francois Hollande and German Chancellor Angela Merkel will be able to come to an agreement with Vladimir Putin in Moscow, otherwise, according to Nemtsov we should wait for a fierce war.

According to the Russian opposition leader Boris Nemtsov, a trip of Hollande and Merkel to is unique and will have direct implications for the development of the conflict in . About this Nemtsov said in a comment to "GORDON" .

"I do not remember a case that European leaders traveled together to . By itself, a trip of Merkel and Hollande is unique and very important. This is the last phase in the political attempt to resolve the military conflict in ," - said Nemtsov.

"Hollande and Merkel are hoping that Putin has enough brains to freeze the conflict or its termination. Their peace plan is most likely based on the implementation of the agreements. The Europeans offered to fix the line of demarcation between the "DNR" / "LNR" and on the positions that have been established to date. Although we know that from September 2014 militants seized 500 sq km of the Ukrainian land. And this topic will be heard at the talks, "- said the politician.

According to Nemtsov, if the contract of Putin with EU leaders fails, the war in will become extremely intense.

"Obviously, if the parties fail to agree, the war will be activated with renewed vigor. Currently Europeans and Americans actively discuss topic of arms supplies to . Putin can use military assistance to to unleash a full-scale war. He will have to step up military actions," - said Nemtsov .

"I wish they would agree. Putin is inadequate, but he is afraid of losing power. The legalization of the Russian people for the fact of the war between and will lead to a sharp drop in the rankings. More than 70% of citizens are against the Ukrainian-Russian war. But he still manages to fool Russian people - only 10% of people know that the Russian soldiers are fighting in . I think that despite the inadequacy and lack of negotiability, the instinct of the retention of power can somehow stop Putin. Although this is not for sure, "- said the politician.