Ogryzko: Blury political position of the Ukrainian authorities do not encourage Western countries to help us 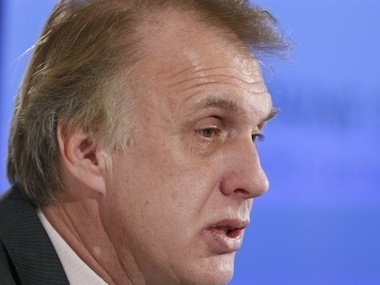 Ogryzko: If you give the Ukrainians weapons, Putin will see the line on which he has to stop
Photo: uacrisis.org

To win millions of Russian soldiers can neither Ukraine separately, nor the West, who does not want to fight, Ukrainian diplomat Vladimir Ogryzko is convinced.

The behavior of the Ukrainian authorities does not stimulate the West to the help. Such an opinion in the comment to "GORDON" was expressed by the Ukrainian diplomat, ex-Foreign Minister Volodymyr Ogryzko.

"Unfortunately, the behavior of our government does not help to convince the world. Our government itself is not very clear in their actions that we need to convince the international community to help us. For example, the Verkhovna Rada adopted a resolution on the recognition of Russia as an aggressor. Then the question arises - who is represented now in Ukraine by the ambassador Zurabov ?! Is it normal that we maintain diplomatic relations with the country - aggressor? Is it normal that we, as economists say, have funded Russia for $ 3 billion, buying the absolute, from the point of view of security of Ukraine, unnecessaries. For example, a household chemicals and not the most necessary types of the food. Plus, we do not fully applied sanctions against Russia, "- he said.

"Looking at this behavior of Kiev, the West is asking - so, who should be the first to fight against Russia - we or Ukraine after all? As long as it is not war, but ATO, as long as we are in diplomatic and trade relations, this blury political position will not stimulate Western countries to help us, "- said the expert.

According to Ogryzko, Europe realizes that Russia is the aggressor against Ukraine.

"Europe is attracted to us, but they see differently the consequences of this attraction. Everyone understands that Russia is an aggressor. Some speak about it publicly, some - on the margins, but at the same time for all of them it is clear that Russian Federation is the reason of aggression. Everyone understands that to win millions of Russian soldiers can neither Ukraine separately, nor the West, which does not want to fight under any circumstances, "- he added.

Ogryzko considers that there is a fight of supporters of granting to Ukraine of the lethal weapon and their opponents on the West.

"There is a struggle between two logics. The first is that if we give the Ukrainians a weapon, it would mean that we thereby throw fat in the fire and it will inflame even more. The second logic - if we give the Ukrainians weapons, thereby we will show the line, which Putin reach and stop. If the Ukrainians will chin, it will stop the Russians and they won’t go further. The struggle between these two trends will define the situation. Which side will win - let’s wait and see. It is positively that some NATO countries have said that they are considering the possibility of lethal weapons deliveries to Ukraine. And one of these countries is not the last in the world the United States, "- Ogryzko concluded.