Professor Zubov: After the Crimea, it seemed that we were disgraced forever, but now they are talking about the annexation of the GDR by the FRG 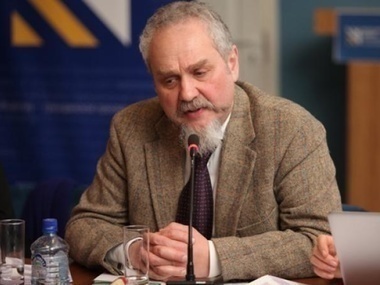 Zubov: Our diplomats are lying about the history, the law and the facts. Even during the Soviet era we didn't face such lies.
Photo: u-f.ru

The politics of Russian President Vladimir Putin is becoming more harmful for the country. It will cause the fall of the regime, said in an exclusive interview with "GORDON" Russian historian, philosopher and theologian Andrey Zubov.

Andrei Zubov, who was fired from the Institute for criticizing the military aggression of Russia, told about his vision of recent statements by the Russian authorities to annex the GDR by the Federal Republic of Germany and about the plans to create the group in the State Duma on the calculation of damages that Germany caused the Soviet Union during World War II.

The statements that annexed the GDR and about the reparation payments that is supposed to make for are either a red herring, or complete ignorance and stupidity. More likely it is both of them.

Objectively, the had exported from the Soviet occupation zone in the GDR a variety of products and goods in an amount equal to fourteen thousand forty-one ton of gold until 1954. At that time it was 15.8 billion dollars. At the same time, they do not take into account that, for example, about two hundred thousand units of museum treasures had been stolen, the exported 2 million books from German libraries, 20 million liters of alcohol, 2.3 million tons of grain, 1 million tons of potatoes, 16 tons of tobacco. 1,335,000 cattle heads had been also reaved. They also exported 60 thousand pianos and 460 thousand radios. Even our Kremlin switch was the switch of Reich Chancellery.

After that to say that did not pay us - absolute madness. Either a person does not know this fact, or he deliberately creates noise from scratch and thus disgraces himself. After what happened to the Crimea, after what happened with , after all the thousands and thousands of dead and mutilated people it seemed that we were disgraced forever, but it is obviously not enough for them, that's why they make such statements.

To oppose yourself to the world, saying deliberately lie, lie and lie again is just a shame

You can oppose yourself to the world in different ways. But to oppose yourself to the world of deliberately telling a lie, lie and lie again is just a shame. Our diplomats lie about the history, the law and the facts of today.  Even during the Soviet era we didn't face such lies. In Soviet times, people were afraid of dealing with known facts in nihilistic way. And now we are not afraid of anything. This, incidentally, is a clear indication of imminent collapse of the system. Whoever go tied up in knots by lying can no longer exist.

I'm talking about the collapse of the system, not the disintegration of . I hope and expect that remains as a single state. Together with we will be useful to each other both economically and politically. I do not want the collapse of , just as the Ukrainians do not want to collapse of their country. And I appeal to you to remember the Christian truth: " Do not do unto others what you would not have others do unto you!".

I do not see now the risk of the collapse of , and I think that centripetal forces are very strong now. Lifting of patriotism - it is a fact and if from sick patriotism go to a healthy patriotism, the desire to preserve the country still remains. You can talk to some extent about the problems of the North Caucasus region, populated mainly by Muslims, but the attitude to has much changed since the nineties. Most of the population of these regions does not want to separate, realizing that these small societies will fall under the power of the extreme Muslim radicals, and then there will be no life, but just a tragedy. does not need to pray about the collapse of but that the Russian people would again embark on the path of sanity and would restore normal relations with your country, compensating for all damages.

But the collapse of Putin's regime is probable. Most of our opposition politicians see their future with the so-called constitutional component and talk about the elections to the Duma in 2016, and presidential elections in 2017. They hope that the context will be changed and, perhaps, elections will be held democratically. In my opinion, the events are now developing so unpredictably that anything can happen much faster. The stop of the Russian attack on Debaltsevo, the tragedy in Mariupol and other facts together even more accelerate the dynamics.

One of the greatest values for a military man is a glorious death. But in the death for Russians is inglorious

I think this regime will collapse for the simple reason that Putin will not change his policy. And this policy is becoming more and more dead-end harmful for . The economic crisis, and a huge number of dead Russian guys will cause discontent in society and the army. One of the greatest values for a military man is a glorious death. And here the death is inglorious, because they are buried in secret and it is forbidden to declare their death. All this makes the army increasingly unreliable. It may take just a few months, only of course if remains united within itself and the ability to revive. needs a complex of systemic reforms. It is not only economic reforms but also political reforms, reforms ideological. The internal unity of will collapse soon if you don't implement such reforms.