Semenchenko: Everyone who is wondering about how long the truce will last, I recommend just to go to the front 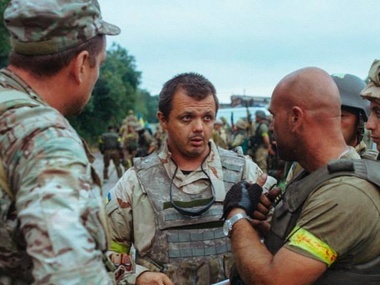 Semenchenko does not believe in the truce
Photo: Maxim Dondyuk / Facebook

The battalion commander "Donbass" Semen Semenchenko believes that in order to achieve the real peace, the state should not rely on the Minsk Agreement, and to prepare for war.

Agreements concluded in Minsk give no reason to rely on the peaceful resolution of the conflict, because the previous agreement was repeatedly disrupted, and we can not trust the representatives of the parties. This is the people's deputy commander of "Donbass" Simen Semenchenko said in the comments to "GORDON" .

"If we analyze the words of Merkel, then she says she does not really looking forward to these agreements and not wearing rose-colored glasses. Look at the statements by other leaders, the same Dalia Grybauskaite (Lithuania's President. -" Gordon ") - she, too, doesn't believes in. Let's say really. Don't we have out own experience, your own eyes? Don't we see how many funerals take place every day? Every time there is a truce, the enemy only strengthenes. Why is it necessary? "- Said the battalion commander.

"I recommend to all people who ask questions about how long the last truce can last, just to go to the front. Yesterday during the assault of Logvinovo during the truce three men were killed, and another 6 people were injured. It is only in the "Donbass ". More 12 soldiers were killed in the VSU. Several tanks were destroyed and they took more than 15 prisoners. They lost half of the FSB special forces, which was to throw attempts to prevent the assault. Today, all this is going on. The question is: What truce? What are you talking about? We have a war going on. Praise and honor to the president, who is trying to stop this by diplomatic means, but it is impossible to negotiate with Hitler "- says Semenechenko.