Semenchenko: If we hit the area of Stakhanov and Gorlovka, there will be pockets there, but with terrorists already 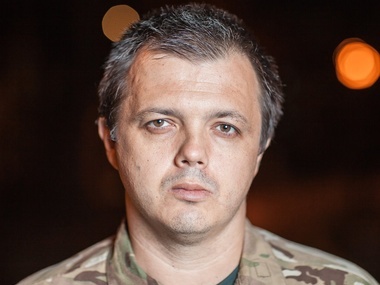 Semenchenko: I do not know the plans of the General Staff, but I know that some brigades have already reported that they have left
Photo: Semen Semenchenko / Facebook

A free passage for the Ukrainian troops is ensured along a country road in Nizhneye Lozovoye, the people’s deputy and Donbass battalion commander Semen Semenchenko reported.

The terrorists withdrew part of their troops from Stakhanov and Gorlovka. Therefore, if the Armed Forces of Ukraine concentrate an attack in this region, the situation may be reversed, the Donbass battalion commander Semen Semenchenko said in the comment to the GORDON .

"I do not know the plans of the General Staff, but I know that some brigades have already reported that they have left.  I think that a decision was made, and I do not support it because, in my understanding, if the terrorists withdrew their troops from Stakhanov and Gorlovka and only several hundred terrorists remain there, we must hit that very place. Then the front will be destroyed and there will be pocket, but with terrorists already. If we choose between inaction when we stand as a rabbit near a python watching the pocket closing, and withdrawal of troops, if this decision was made, it is a positive fact," he said.

Semenchenko believes that the Ukrainian army is strong enough.

"Our whole group has remained in Stakhanov, and almost all terrorists were transferred to Debaltsevo from there, there are not more than 600 people in the whole front there. All terrorists were withdrawn from Gorlovka, while we have not withdrawn our troops from there. Therefore, our forces are enough to carry out such an operation. We outnumber the terrorists," he reported.

According to the battalion commander, the Ukrainian troops are leaving the Debaltsevo region relatively freely.

"There are two roads. One of them is impassable because it is blocked in Logvinovo. There is a chain of terrorists’ strong points from Logvinovo to Uglegorsk. But there is a parallel road – it is a country road going through Nizhneye Lozovoye. It is called the road of life. This road is now controlled by the Donbass battalion, part of the National Guard and the Armed Forces of Ukraine. I report that there is no pocket, that a free passage for our troops is ensured, that there are attempts to fight back this passage from the terrorists, but they face our resistance. The artillery seriously works both from our side and from the side of the terrorists," Semenchenko said.