Senchenko: There is no blocking of the Crimea, there is an overlapping of the transport movement within the anti-terrorist operation 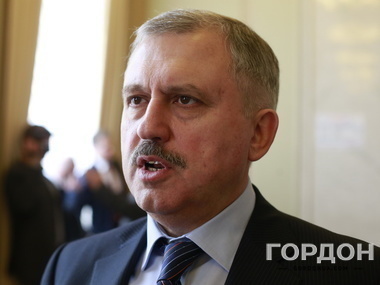 Senchenko: Ukraine has to work actively with inhabitants of the peninsula, with their brains
Photo: Aleksandr Khomenko / Gordonua.com

The president of Russia Vladimir Putin planned that Ukraine would support occupied territories and the Kremlin would rule them, the ex-People's Deputy Andrey Senchenko considers.

The Ukrainian authorities received the information that in the Crimea militants are being trained for carrying out acts of terrorism therefore the transport connection with the peninsula was blocked, –the former People's Deputy Andrey Senchenko declared in the comment to the “ GORDON ”.

"You see the events in a wrong way. It is not blocking, it is an overlapping of the transport movement to the Crimea within anti-terrorist operation. It was overlapped because militans are being trained for the subsequent infiltration on the continental Ukraine. Kiev had grounds to assume that on New Year's holidays there could be acts of terrorism. So it is not blocking, it is a counteraction to invaders and saboteurs from the Crimea", – the ex-people's deputy said.

According to Senchenko, the Russian president Vladimir Putin planned that Ukraine would support occupied territories.

"As for blackouts in the Crimea and suspensions of social payments to Donbass, it is necessary to understand: Putin planned that Ukraine would support occupied territories, but the Kremlin would rule them. It is the silliest offer ever, the official Kiev will not go for it", – the politician told.

Senchenko considers that Ukraine needs to work more actively with the population of peninsula.

"Protest moods strengthen In the Crimea every day. Ukraine must use it more accurately and more competently. Statements like "We should seize the Crimea with tanks and guns" – are foolish. It is necessary to work actively with inhabitants of the peninsula, with their brains. It does not mean that Ukraine has to eise the life in occupied territories. According to the international conventions It is an invader’s (Russia’s) duty. And Ukraine, in its turn, has to create all opportunities for those who want to leave a conflict zone, to protect their civil and property rights, to defend their interests. Then the relation of Crimeans to Ukraine will be sharply changed, as well as their relation to the Russian occupational authorities", – the ex-people's deputy told.