Sugonyako about IMF loans: A drunkard may borrow from his neighbour, but it will not make his household better 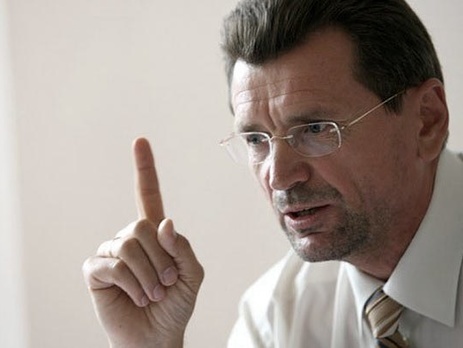 The Ukrainian economist and Chairman of the Association of Ukrainian Banks Alexander Sugonyako thinks that the Ukrainian government must in the first place think of creating new jobs in order to overcome the crisis.

The Ukrainian economist Alexander Sugonyako considers that there are many objective reasons for the downfall of the national currency, however there are people who are interested in the drop of the hryvnia rate. He said it in the comment to the GORDON .

"I cannot say that someone dropped the hryvnia rate for no reason just to do a bad turn to all of us. It is clear that there are people who are interested in it. These are people who know what the rate will be, when to buy dollars and when to sell them. There is this factor, but the downfall is largely due to absolutely real objective and subjective reasons that have been in place during the previous period in the economy of more than five years, especially during the last year," Sugonyako said.

"In the first place, we have a huge deficit of the balance of payments, a budgetary deficit, hence inflation and hryniva depreciation. The industry and the economy on the whole are deteriorating, there are negative forecasts as to the exchange rate. People in power who possess the necessary information play with these basic factors," the expert pointed out.

In Sugonyako’s opinion, loans from international organizations will not help the Ukrainian economy unless the government supports its development and creation of new jobs.

"Hopes that the IMF loan will help us are a sign of the infantile way of thinking of former Komsomol members with liberal training. The hryvnia will be stable when the Ukrainian economy is stable. The hryvnia cannot be strong with weak economy. A drunkard may borrow from his neighbour but it will not make his household better. One must work! Ukrainians must be provided jobs. That is what the government and the National Bank must do. They must ensure jobs and salary and retain prices. And they do not deal with it. They are engaged in looking for money. Nobody has given them anything for a year already because nobody believes them. Neither people inside the country nor abroad believe them. Nobody gives money to liars and thieves," Sugonyako stated.

The economist did not rule out mass protests due to the actions of the Cabinet of Ministers and the National Bank of Ukraine.

"Not a food riot, but a riot of Ukrainians against the weight on people’s neck in the form of the National Bank and the government. But it is not a food riot!" Alexander Sugonyako considers.