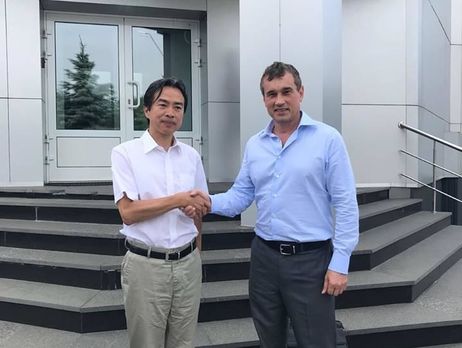 The ambassador noted that he was interested in visiting Bila Tserkva industrial park
Photo: biopharma.com.ua

After visiting Bila Tserkva industrial park and Biopharma Pharmaceutical Plant established by the prominent businessman Vasyl Khmelnytsky, the Ambassador Extraordinary and Plenipotentiary of the People's Republic of China to Ukraine Du Wei said that Ukraine and China had major opportunities for the co-production and creation of business projects.

According to Du Wei, the Chinese businessmen are keen on the investment in Ukraine and joint Ukrainian-Chinese production, and Bila Tserkva industrial park can become a platform for such projects.

The promoter of Bila Tserkva industrial park and Biopharma co-owner Vasyl Khmelnytsky observed that creation of industrial parks was a matter familiar to China, so the construction of IP would stimulate further partnership with Chinese businessmen and investors.

The Chinese Ambassador confirmed it was the creation of industrial parks 40 years ago that became the basis for economic breakthrough in China. The ambassador noted that he was interested in visiting Bila Tserkva industrial park to discover the effectiveness of implementation of similar projects in modern conditions.

'Reform in China has just launched with the development of industry, creation of industrial parks and free economic zones, and the fact that Ukraine took the momentous first step in the same direction is very important for the beginning of reforms in Ukraine that should be crowned with success,' noted Du Wei.

According to Director of Bila Tserkva IP Andrey Brynzylo, for the industrial parks to work to full capacity, it is necessary to develop the suitable legislative framework. Otherwise, Ukraine will constantly fall short of its more advanced neighbours where the creation of such parks has long been regulated by law.

According to Vasyl Khmelnytsky, Bila Tserkva industrial park was incorporated in April 2018, and the first plant will be launched this autumn. The construction of another 3-4 plants is scheduled this year, and the launch of 20 manufacturing facilities is scheduled for the next four years.

'China's experience can inspire Ukrainian businessmen as it is a proven fact that the construction of new plants accelerates tax revenues, job creation and, as a result, a qualitatively new level of salaries, increased welfare and financial solvency of citizens, and ultimately the economic growth', emphasizes Khmelnytsky Vasyl.