What will be with Hryvnia until the end of the year? 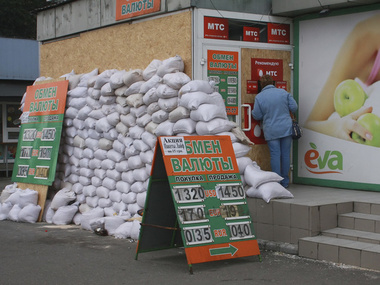 Ukrainian foreign exchange market is going through hard times now. Hryvnia exchange rate in the interbank market has stopped its rapid dropping; however, cash currency is now out of circulation. Every day it is getting more and more difficult to buy euros or dollars in a bank or an exchange office, which results in the growth of a “black” market with its own rates. Does it mean that the official hryvnia exchange rate is overrated and that we have not reached the bottom yet? What awaits our currency in the next several months? GORDON asked experts about it.

The hryvnia was officially devalued by 8.9%, but if we take the real "black" rate (unfortunately, the turbulent 90s come to mind when it was possible) we get 20%. The NBU administration cannot put things right in the banking sector and stop hryvnia devaluation as it does not have appropriate knowledge and expertise. Hryvnia’s fall results in the deterioration of the credit profile.

The IMF gives us only $7.4 bln per year, and we have to return over $3.7 bln from this amount back to the IMF. At the same time, Ukrainian “migrant workers” have transferred to Ukraine $8.5 bln just in 2013. Hats off to them. Private transfers from abroad amounted to $2.88 bln. $1.16 bln were transferred to the country in cash. This figure has increased dramatically this year. Naturally, migrant workers’ money is now gradually flowing to the “black” market. If the government quadruples pension duties from selling and buying foreign currency (to 2%), as it intends to do, transfers will be completely shadowed.

Moreover, we should not forget about outflow of money from the banking sector. Currency deposit outflow has amounted to $7 bln since the beginning of the year, another $2 bln were bought in exchange offices. A certain share of this money also flows to the “black” market since the rate is higher there and no documents are required. Besides, around $100 bln is outside the banking system (largely among the population), and part of this money has been circulating in the “black” currency market for all this time.

The National Bank seems to proceed from the assumption that the situation in the East will be improving. It is probable.

Every administrative measure (for example, daily cash withdrawal limit. – GORDON) helps on the one hand, but aggravates the situation on the other hand. For example, the ban on import advance payments will hit small business with limited abilities to use bank guarantees that would allow avoiding advance payments. Expenses of large companies associated with these services will increase. On the other hand, this will eliminate mechanisms used for the capital to flow abroad. For example, there was an advanced payment under an import contract, and then the contract was terminated and no shipments were effected.

The National Bank seems to proceed from the assumption that the situation in the East will be improving. It is probable. Owners of large metallurgical or energy holdings will probably come to an agreement with "DNR" and "LNR". If railways are restored, at least two large metallurgical plants near Mariupol will renew production and export. Some other factories in the ATO area may also start working.