Zakharov: Now it is even worse in Donetsk than in Stalin times 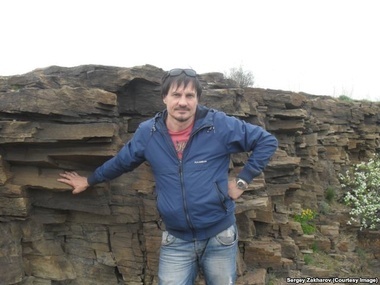 The artist Sergey Zakharov who has recently been released from DNR captivity said in an exclusive interview to GORDON how his Murzilka art group was fighting as partisans in the occupied Donetsk, who sat with him in the cell of Donetsk Security Service and why it is every day more dangerous to live in his hometown.

July 5 will become a milestone in 2014 war as day of occupation of Donetsk. The terrorists who overnight left Slavyansk for which the Ukrainian army had been fighting for several months, entered Donetsk before noon, greeting passersby who did not understand what was waiting for them from armored personnel carriers. There were lines at the ticket offices of the local railway station – people were massively leaving the city.

Some days later, there appeared plywood caricatures showing terrorist leaders in Donetsk. Girkin with a gun at his temple and an inscription: "Just do it". The puny Motorola, the terrorist commander, near his stout bride (their wedding, judging by videos uploaded in the Internet, was celebrated under the walls of the building of Donetsk Regional Administration where terrorists were torturing hostages in the meantime). After the crash of Malaysian "Boeing", passersby could see an image of Death on one of the streets with symbols of "Novorossiya" and a picture of the brought-down airliner.

Rumors that guerrilla artists who were called Murzilka art group were passed on by word of mouth. Someone saw caricatures personally and even managed to take photos of them, then uploading them onto social networks, someone retold what others had told. Some admired courage of artists, others were indignant with their impudence: the sense of humor dies as something useless in Donetsk People’s Republic.

However, the picture of the odious "national governor" Pavel Gubarev as conceived by the artists remained undone. If Gubarev knew about, he would probably get upset: he likes his image in all manifestations, an example of that is the recent video for the song "From Donetsk to the Kremlin" with his participation accompanied by the singer Vika Tsyganova.

The author of courageous art works Sergey Zakharov was arrested at the exit from a workshop. He is describing what he underwent in the terrorist captivity with pauses, omitting details that are unpleasant and painful to remember. He managed to be released from captivity only one and a half months later. Just by chance.

– Sergey, after the release you left Donetsk at once?

– It was the first thought – to leave immediately, but still I was kept there by circumstances for some time. It has been a week that I am in Kiev.

– It did not come to renting an apartment yet. I arrived here with 500 hryvnias in my pocket. I was sheltered by my old acquaintance from Donetsk, I am living in his office. But I heard such stories. It is an outrage, of course. I was interviewed for one channel on the phone – they asked me about the life in Donetsk. I said in particular that, despite all horror of the events, it is clean and orderly in the city. The presenter called me back after the program, and I felt that she was indignant: for whom do they put the city in order – for the terrorists?! She said that people should have abandoned everything so that the situation would become even more awful, and let people fully understand what the life was like in "DNR". And she also said that a prosecutor from Donetsk was now living in her house and that he parked his car in a wrong place. I answered that if a person is a boor, place of registration does not matter.

– Judging by your works you suffered from, you are a good artist. Have you been noticed in Kiev yet?

– For one week that I have been living in Kiev, I felt both attention and support, I received some offers – not for work, but for cooperation so far. Representatives of a decent magazine also called me, they want to publish my illustrations – sketches about the life in captivity. If I try to find something positive in what has happened to me, it is a good opportunity to begin a new life.

– And do not you hope to return to your former life?

– Return to Donetsk what it has become now? No, by no means.

– And will your native Donetsk change sooner or later? Do you trust it?

– With God’s help. In early spring when there were demonstrations in Donetsk, I was watching people. Those who were walking with Ukrainian flags had normal human faces. And there was such aggression from those who had bats in their hands... I was standing and watching, I could not believe that they could win. In Donetsk, there are many normal people, but they were unarmed, and these ones, I saw it in their eyes, could easily use force. And it was then that a guy who participated in a pro-Ukrainian demonstration was killed on Lenin Square in Donetsk. Even in July when we were putting our the installations I hoped that everything was going to finish soon, and the city will be liberated from terrorists. Now there is a feeling that our territory is already a cut-off chunk. Also, there will be another Transnistria or something of the kind.

– Well, the Ukrainian army has been struggling for Donetsk airport for five months already. If it were a cut-off chunk, they would have left long ago – especially since there is almost nothing left of the airport.

– It is a fight for territories, for borders, but not for people. Though it is clear that if it were not for the Russian army, these rebels would have been swept out of the city in a week.

– And what people? Do not most of Donetsk residents support "DNR"?

– There are not so many normal people left in Donetsk, they mostly left the city. And those who welcomed "DNR" did not understand that they did harm with their own hands. After all, people had everything: work, salary, pension, peaceful life. Now they can only blame themselves. But my friends, fortunately, have absolutely different mood.

– I do not want to offend anybody, but I think that many Donetsk residents lack cultural background. A worker comes home tired, has a drink, lays down in front of the TV, watches videos about "crucified boys" and believes in this nonsense. And others, on the contrary, keep silence or assent out of fear though they understand everything. I told all my acquaintances not to express their opinion anywhere – neither in social networks, nor outside their own kitchen. It is even worse in Donetsk now than it was in Stalin times.

– And you were not afraid to express your opinion – in a silently, beautiful, adequate way, with sense of humor. Your works became the only evident manifestation of guerrilla war in the occupied city. You are a real hero.

– Do you know how I was shaking in my shoes? One thing is to prepare works in a closed workshop, another thing is to find courage to expose them on a crowded street. Though first we decided that we should do it at four o’clock in the morning when the city sleeps. We thought that is was dangerous to do it in the evening because of curfew and that the best time was in the middle of the night when there are no patrols. We put some works in the boot and set out. Hardly had we put the first installation when a patrol came and began to check our documents. And we had such luggage in the boot that if we had been forced to open it, we would have been done for. And then we realized that we should better do it in the afternoon because it is less noticeable that way.

– And you only had few seconds…

– At first we were looking for a place, checked that there were no video cameras in the neighborhood. Before exposing Girkin-Strelkov's "portrait" with the gun at a temple Komsomolets cinema, we first made an inscription, walked back at a safe distance, watched a little if everything was quiet and only then returned to set it up. We put "Motorola with the bride" before the entrance to the Wedding Palace, one of the works was near Kalinin hospital which is simply stuffed with wounded terrorists. Hardly had we put it when we saw DNR fighter with machine guns approaching, however, fortunately, nothing was noticed, and our photographer even managed to take a photo of them when they were walking past the installation.

– The terrorists were passing by. And the passersby noticed them for sure. Your works cannot but be noticed, especially in the city, where everybody has been on the alert for a long time.

– They stopped, laughed, someone even took pictures on the mobile phone. Do you know how pleasant it was to see the instant, live reaction of the public. But the works disappeared no later than after half an hour. It is unlikely that passersby carried them away them under the arm – it is simply dangerous. It means that they were taken away by patrols. I was working on other sketches, too, but … I did not finish them. One day I was going out of the workshop, and people were meeting me already.

– Do you know how they found you?

– They traced me by the phone. First, I switched off my phone and used another one, then I lost caution and sometimes called from my old number. I was taken right after that.

– But someone must have given them your number so that they could do that...

– Well, I do not know. I met Russian journalists once. Now people write that they informed against me. But I cannot prove it.

– And did you dare trust Russian journalists if, as a rule, they work for terrorists?

– These were journalists of an oppositional TV channel. But I tried to be careful even with them. I told them that someone will come pick them up. I asked for a car from one of my familiar taxi drivers, I drove myself, picked up the journalists, took them to a secluded place and only then admitted that it was me.

The whole article could be found at gordonua.com