Professor Zubov: If Putin says that the Crimea has the right for self-determination, Chechnya should also be granted independence 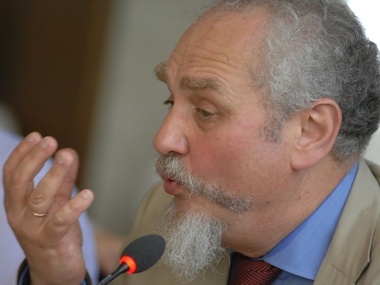 Professor Zubov thinks that because of the problems inside Russia, the agression in Ukraine could be less strong
Photo: msps.su

The Russian historian, philosopher and religious scholar Andrey Zubov told the GORDON on what the conditions for a successful truce in Donbass are, why Putin’s yesterday's message will adversely affect the future of Russia and why the Russian President's position concerning the Crimea and Ukraine is absolutely illogical.

All parties, including the OSCE, are skeptical about the peaceful settlement of the Donbass conflict because they see that Russia, "DNR" and "LNR" do not keep their word. And when there is the slightest opportunity or positive military prospects, they break the truce and begin military operations.

When there are armed groups on both sides, incidents are inevitable. But if there is a wish to observe the truce, these incidents do not develop into serious military operations. Here we can see that many thousands of people died after the Minsk accords. There were attacks, firing, fights – everything. It is absolutely clear that that party is not interested in peace.

The only option is that Russia will sooner or later have to stop helping the fighters and will leave the southeast of Ukraine since sanctions are not a joke, and Putin's power will have to refrain from aggression in the face of possible social disorders in Russia.

It is not the truce as such that is important, but rather what will follow it. If this truce is followed by gradual evacuation of these so-called republics and liberation of the southeast by peaceful rather than military means, then this truce is a positive phenomenon and a beginning of stabilization. But if it is all about keeping the status quo, that is Donetsk, Lugansk and areas adjacent to the Russian border are controlled by fighters, and the other part of Donetsk and Lugansk are controlled by Ukraine, then this opposition without fire will be disrupted very quickly as it has already been disrupted many times.

There was no appeal for peace in Putin’s yesterday's speech

There was no appeal for peace in Putin’s yesterday's speech. The most important thing is that there was no desire to change the situation that brought Russia to the brink of an economic disaster. A key to relations with Ukraine is in Putin's hands. As well as the reasons for sanctions – the reasons for which Russia found itself in such a miserable situation. But Putin does not want to use this key. On the contrary, citing surprising and, from the point of view of reason and history, incredible arguments, he said that the Crimea had always been Russian. And, as you remember, "the one who will try to take away the Crimea from us, will follow the way of Hitler and Nazis," – these are absolutely crazy words, unfortunately. It is clear that it is where everything began.

Putin does not acknowledge presence of the Russian troops in Ukraine, he does not acknowledge that Russia helps southeast insurgents with equipment, experts, and training camps. As long as he does not acknowledge it, he lies. And if he lies, then there is no chance that he will solve this problem in a positive manner. This message is a message of a person who wants to continue aggression he is demonstrating now, and who for this sake is ready to turn Russia into a besieged fortress – poor, miserable and putting every effort for the defense against non-existent geopolitical enemy.

Yesterday Putin remembered about our separatists. It is the question of Chechnya and this is how he came to power in 1999-2000. We do not like to speak about double standards in Russia, but a double standard is obvious here. When one of the subjects of the Russian Federation, namely Chechnya, tried to separate, there was a really powerful separatist movement there, another thing is how lawful and universal it was for the Chechens, but it was quite powerful, it is a fact. Both Russia and Putin had no doubts and used all forces to stop separatism. Probably, they had such a right, after all, the territorial integrity of the state is sacred, especially, taking into account the fact that there was no genocide against the Chechen people, a lot of Chechens lived in Russia, some studied at Moscow State University of International Relations (MGIMO) and did not suffer from any repressions.

Even Stalin had a kind of logic, even if it was false; there is no logic at all here, only lies

There was no genocide of Chechens in Russia in the same way as there was no genocide of the Russian people in the Crimea. And it is a natural mission of the state to achieve integrity of Russia and to neutralize and suppress separatists. However, for some reason, Putin does not apply this principle to Ukraine; what was possible to do in Russia is impossible to do in Ukraine. It is absurd! It is an absurd situation! And if the Crimea has the right for self-determination in Ukraine even if this right is falsified and not all people support it, then Chechnya and Dagestan should have been granted independence in 1999, too. If territorial integrity prevails, the rights of Ukraine should be recognized and it should be left in peace. Putin's position is so illogical that it is a seldom case in the history of diplomacy and international relations, at least in the 20th century. Even Stalin had a kind of logic, even if it was false; there is no logic at all here, only lies.

Yesterday, people in Grozny tried to show that war is not over yet, that it is not the end and that there are still resistance forces in Chechnya. It is awful that people were killed. I feel sorry both for separatists and for those who fought against them. But it is a very good sign, too. It reminded that one should not have double standards, they will always take a heavy toll.