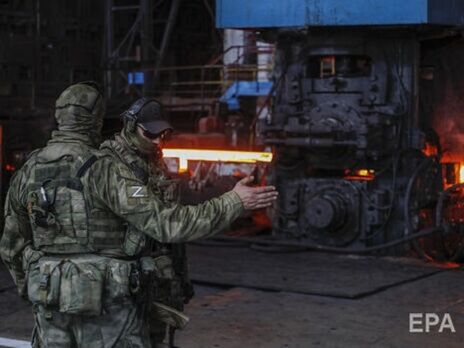 Gaidai: Men in Alchevsk almost ran out
Photo by EPA

The Alchevsk Metallurgical Plant stopped work, as the Russians forcibly mobilized almost all employees. This was announced in Telegram on September 24 by the head of the Lugansk regional military administration, Sergei Gaidai.

"Men in Alchevsk almost ran out. Those who were found were mobilized. Even with armor. One of the best metallurgical enterprises in Ukraine, the Alchevsk Iron and Steel Works, stopped production. Because there was no one to work," the head of the regional military administration, Sergei Gaidai wrote.

A similar fate befell the Yenakiyevo Metallurgical Plant in the Donetsk region, the Main Intelligence Directorate of the Ministry of Defense of Ukraine reported on September 21. Gaidai noted that although there is no one to work at the enterprises, "there is someone to" vote" – the armed invaders continue the pseudo-referendum.

"At the front, a resident of Alchevsk – either already in captivity, or died – will somehow" vote". Perhaps, telepathically – the vote will be taken into account," the head of the OVA sneered. According to him, armed Russian soldiers come to the homes of Alchevsk residents, call them, ask them to "vote" even those who have left for the Russian Federation.

“They stop on the street. To objections that they don’t have a passport with them, they answer succinctly: “And you don’t need it – we already know you,” Gaidai described what was happening.

Alchevsk has been under the control of "LPR" militants since 2014. On February 21, 2022, Russian President Vladimir Putin announced the recognition of the "independence" of the occupied territories of Ukraine and signed the relevant decrees in the presence of the leaders of the illegal armed groups "DPR" and "LPR" Denis Pushilin and Leonid Pasechnik.

On September 21, Putin signed a decree on partial mobilization in Russia to replenish the troops that invaded Ukraine.