Bohdan to Gordon: President personally orders who is going to prison. There is a long list – me, you, Butusov, Shuster, Razumkov 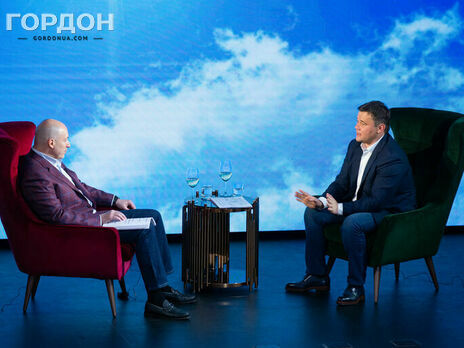 Bohdan to Gordon: By the way, there is a plan to put you in jail, too
Photo: Rostyslav Gordon / Gordonua.com

Former Head of the Office of the President of Ukraine Andrii Bohdan declared that criminal charges are being prepared against him and other critics of current authorities. He said it during an interview to Dmytro Gordon, founder of web-based media GORDON.

“I know that you should be already in jail. Were they going to put you in jail?” – journalist asked.

“They are going now. They are going to put you in jail, too, by the way,” – Bohdan replied. “There is critical stage of madness out there. They are putting everyone in jail. They already go in packs with this.”

He resented the way authorities react on jokes and satire about them.

“You know what really hurts? During press conference Volodymyr Oleksandrovych, commander-in-chief mister Zelensky, told us that when he was in Kvartal-95 it was satire. Well, after I wrote some satirical post and in a way trolled authorities (have every right for it!) reaction was stormy. Comrade Sukhachov was summoned. [acting director of State Bureau of Investigations]. You know his nickname? Liosha Zilli. He likes [French brand of clothes] Zilli. Wears it all the time. People in law enforcement laugh about it. So, the nickname is Zilli. And, he was tasked with digging up any dirt to put Bohdan in jail,” – remarked ex-Head of the OP.

Bohdan emphasized that he is not alone in the list of people dirt on whom is to be “dug up”.

“The list is long. You are in it, too,” – said former executive.

“Wait. You, I understand. But why me? For what? Are we going to be in the same cell?” – journalist asked.

“I don’t know. There are not enough cells. Because there are all the people on that list: [journalist, editor-in-chief of Censor.NET] Yurii Butusov, [TV host] Savik Shuster, [ex-speaker of Verkhovna Rada] Dmytro Razumkov, and his entire group… And some 100 thousand other people. Well, some bloggers he met somewhere on Facebook. Ivan Ivanovich Asshole, pardon me. Some bots, some incomprehensible persons.” – Bohdan said.

Journalist asked if President personally “orders to put in jail”.

“Yes, personally. Comrade Sukhachov is acting director now. And he is very eager to be assigned permanently, for long period of time. He wants stability. And he takes everything under his control, holds meetings, assigns “secret investigative activities”. We call it “ear, throat, nose,” – Bohdan said.

Gordon clarified if he was a subject of those “secret investigative activities”.

“They have a judge in Poltava. They busted him on a bribe. Standard practice: they busted him and hung him. And now he sign the papers for them without reading. 99% of decisions. Yes, you are a subject, too,” – said Bohdan.

Gordon asked why Zelensky is so intolerable to criticism.

“I don’t know what happened to him during these two years. But it is a catastrophe. You can see that he is not the person we knew then. It is completely different person. Some kind of physical, chemical, psychological changes have occurred. I don’t know what has happened,” – replied Bohdan.

“You said you respected him. I tell you: I loved him. I simply loved him,” – remarked Gordon.

Bohdan said that now the journalist definitely would be imprisoned out of jealousy.

“If anything… I am lawyer. If we are not to framed that we accidentally meet one another on the corridors of Pechersk court,” – said ex-Head of the OP.

In that case who should he hire as a lawyer, Gordon asked.

“They are all going to jail, too. There will be no lawyers,” – joked Bohdan.

Zelensky founded Kvartal 95 studio, before presidency he was its artistic director. He was elected as President on April 29, 2019, and inaugurated on May 20. In the second round, 73.22% of voters voted for Zelensky while his rival the fifth President Petro Poroshenko has gotten 24.45% of votes.

During his campaign and after election Zelensky repeated that he plans to hold the office for one term only. “I said I am going for one term. I already feel that I have very little time,” – he declared in September 2019.

However, during press conference in May 2020 he did not rule out that one term could not be enough time to fulfill all electoral campaign promises. In October 2021, he announced that he “made no decision on the second term yet”.

According to Head of the Office of the President Andriy Yermak, the issue of the second term Zelensky would resolve closer to the end of the first one.

In late November 2021, on the air of Ukraine 24 TV channel, Gordon reported that he had disappointed in President Zelensky. He reminded that in 2019 he strongly opposed reelection of Poroshenko and publicly called to vote for Zelensky in hope that Zelensky would swiftly perform needed reforms. But after two and a half years under Zelensky administration in journalist’s opinion in Ukraine “no significant reform is implemented, fight against corruption didn’t even start, we observe even greater concentration of power around the Office of the President and pressure on the freedom of speech”. After that, Zelensky told the press that Gordon “is jumping out of his pants” in his dislike for Zelensky’s second term in office. In response, Gordon reminded that it was Zelensky who promised to lead the country for one term only, and now he must keep his word. In addition, Gordon accused the Office of the President of running information campaign against him personally.

According to survey jointly conducted by Ukrainian Institute for the Future and New Image Marketing Group form November 28 to December 10, Zelensky leads presidential rating. If election would be held next Sunday Zelensky would get 25% votes of Ukrainians who plans to vote and had decided for whom.  Poroshenko would receive 16%. In the second round, Zelensky would win over any other candidate.