Boris Lozhkin compared Ukraine to Israel and shared his opinion, what the survival of the two states depends on 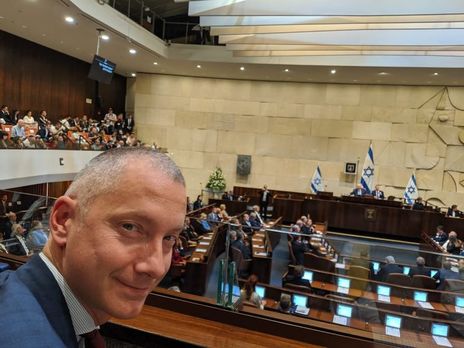 Boris Lozhkin: Both Israel and Ukraine will have to do their best to achieve it, as the chances of survival of our states directly depend on how united we are
Photo: Boris Lozhkin / Facebook

The head of the Jewish Confederation of Ukraine, Boris Lozhkin, attended a meeting of the Knesset, where the new deputies of the Israeli parliament took the oath.

On Thursday, October 3, the President of the Jewish Confederation of Ukraine, Boris Lozhkin, took part in the solemn meeting of the Knesset, during which the newly elected deputies of Israel took the oath of office. He shared this on his Facebook page.

Lozhkin emphasized that the central theme of the speeches of both the President Reuven Rivlin and the Knesset Speaker Julius Edelstein was the national unity. According to him, this topic is especially relevant for Israel today – just half a year ago, for the first time in the history of the state, the parliament failed to form a coalition in the allotted time. The Knesset was dissolved, new elections were held.

“After the announcement of their results, the Israelis began jokingly preparing for the third elections during one year. However, it may not be a joke – the votes were divided between the main contenders almost evenly, but none of them, according to the preliminary estimates, will be able to form a coalition without the other. Last time they were unable to reach a compromise. We will find out very soon if they manage to do it this time,” noted Lozhkin

As Julius Edelstein reminded, it was the lack of national unity that already twice had led to the collapse of the independent Jewish state. When the Jews fought against an external enemy, they were able to crush empires. But as soon as a civil war between the Jews themselves began, everything collapsed like a house of cards, emphasized Lozhkin.

He also added that this topic is familiar not only to the Israelis. The history of Ukraine is full of similar examples: from the Kyivan Rus to the Ukrainian National Republic (UNR).

“It is a great challenge to solve the problem of lack of national unity, especially in the presence of the external aggression, Both Israel and Ukraine will have to do their best to achieve it, as the chances of survival of our states directly depend on how united we are,” noted the President of the Jewish Confederation of Ukraine.

September 29th Boris Lozhkin spoke about the March in memory of the Jews who had been shot in Babi Yar in 1941. According to him, every year the number of participants in the March grows – in 2016, one person walked along the last route of the Babi Yar Jews, and in one year already 150 persons were walking in the column. This year, more than 500 people took part in the “Memory March” on September 29.