"Doomsday Clock" froze at the 100-second mark before midnight. The report mentions Ukraine 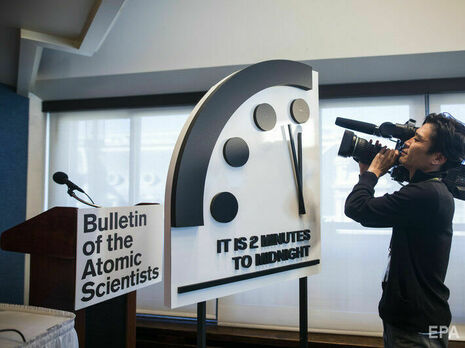 Representatives of the organization Bulletin of Atomic Scientists did not move the symbolic "doomsday clock", leaving them at the mark of 100 seconds to "nuclear disaster." This is reported in the organization's press release, which was published Jan. 20.

"The world is no safer this year than it was at this time in 2021, so we decided to leave the pointers at the 100-second mark before midnight," said Rachel Bronson, head of the organization.

The academics noted that U.S. relations with Russia and China remain tense, with all three countries engaged in nuclear modernization efforts, including China's large-scale program to expand the deployment of long-range silo-based missiles, and Russia, China and the United States seeking to develop hypersonic missiles.

"Ukraine remains a potential hotspot, and the deployment of Russian troops on the border with Ukraine increases daily tensions," the press release said.

The Doomsday Clock Project began in the Bulletin of Atomic Scientists magazine in 1947. The decision to move the hands of the Doomsday Clock is made by the journal's board of directors and the authors of the journal, including 15 Nobel Prize laureates.

In 2019, the symbolic clock was left two minutes from midnight. In 2021, the Doomsday Clock also showed the 100-second mark, but there was no mention of Ukraine in the organization's report.