"If A Person Is Suspicious – ...“Bang” Without Talking." Occupiers Allowed To Shoot Civilians At Checkpoints In Kherson Region – SBU 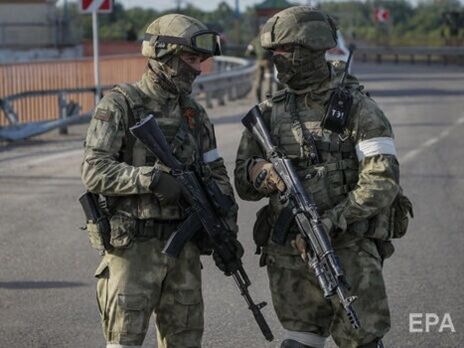 Two invaders discussed which of them would be the first to kill civilian drivers on the road in the Kherson region, the conversation was published by the SBU
Photo by EPA

At checkpoints in the temporarily occupied territory of the Kherson region, the invaders were allowed to shoot civilians. The press center of the SBU reported this on Facebook on June 6, citing an intercepted conversation between two occupiers of the DPR terrorist organization.

It is noted that the militants are patrolling at neighboring checkpoints. "They told me:" If a suspicious person, without talking, set them on fire”. My order from the major is this: a car or a truck appears, you ask: “What are you carrying?” And if the person look suspicious, shoot them, no talking.”– said “Gray-Hair” (Sedoy), one of the terrorists.

In response, his companion clarifies: "Yeah, on your part, will you be the one to burn the? If not, should we?” The SBU noted that while the occupiers decide which of them will be the first to kill peaceful drivers on the road, as of June 6, the Armed Forces of Ukraine have already destroyed more than 31,000 Russian soldiers in battles.

After a full-scale invasion of Ukraine on February 24, Russian troops captured part of the Kherson region. The operational command "South" reported on May 28 that the Armed Forces of Ukraine launched a counteroffensive in southern Ukraine.

The operational command "South" reported on May 28 that the Armed Forces of Ukraine launched a counteroffensive in southern Ukraine. Russian troops were forced to go on the defensive in the Kherson region, the American Institute for War Research noted on May 29.

20 production facilities opened in Ukraine due to deportation of people to Russia and Belarus - Venediktova
5 june, 2022 15.24 |comments:

Felshtinsky: Kremlin Is In A Mood To Fight. There Are A Thousand Putin’s Brothers Around Putin, There Are No Differences
30 may, 2022 21.51 |comments:

Fights With Russia Reached Maximum Intensity, Enemy Storms Positions Of Armed Forces Of Ukraine In Several Directions At Once – Ministry Of Defense
28 may, 2022 19.45 |comments: