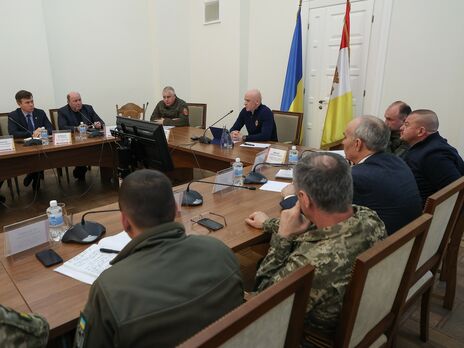 Trukhanov noted that at the next session of the city council he will appeal to the deputies to fund these directions
Photo: omr.gov.ua

"According to the results of the meeting, a number of protocol orders were given to the profile deputy mayors and officials of Odessa City Hall, in particular, to prepare locations for the territorial defense units, providing them with the necessary equipment, etc.," the mayor's office said in a statement.

Trukhanov noted that at the next session of the city council he will appeal to the deputies to finance these directions.

"Since 2014, our country is in a war mode. In this context, local authorities have a wide range of tasks - from participation in the formation of brigades of the terror defense to the realization of state policy in the sphere of education and science in the institutions of general secondary education, as well as military-patriotic training in the summer time together with the Ministry of Defense of Ukraine", – said the Odessa mayor.

The press service of the City Council reminded that since January 1, 2022, the law of Ukraine " About the basis of national resistance" began to operate.

"According to the law, local authorities take part in the preparation and execution of tasks of national resistance in peacetime and special period. In particular, they provide, within the framework of the relevant expenditures of local budgets, proper financing of national resistance activities, contribute to the creation of volunteer formations of territorial communities, etc." – explained in the city council.

Trukhanov stressed that the deployment of brigades and battalions of the Defense Forces of the Armed Forces of Ukraine, the protection of civilians and critical infrastructure and other issues require the attention of the city authorities.