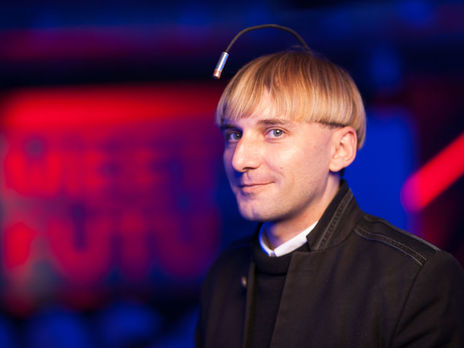 Neil Harbisson: Every color has its own frequency and the frequency has its sound
Photo: S*EVENT / Facebook

Due to congenital achromatopsia Neil Harbisson was not able to see different colors. That is why 15 years ago he implanted in his skull an antenna with microchips and that allowed him to identify sound frequencies and to “hear” colors.

Neil Harbisson, British visionary artist and composer, sometimes called “the first cyborg”, gave a lecture in Kyiv on April 23. 34 years old Harbisson cannot see colors due to a condition called congenital achromatopsia. That is why 15 years ago he implanted in his skull an antenna with microchips and that allowed him to register sound frequencies. He came to Ukraine on the invitation of the Zagoriys family within the framework of the #MeeTheFuture project, reports Delo.

“Mahatma Gandhi said once: be the change that you wish to see in the world. That is exactly what this man did. He saw the world in a way he wanted to and became the first human cyborg,” Glib Zagoriy, the owner of the PrJSC Pharmaceutical Firm Darnitsa said as he introduced Neil Harbisson to the audience.

Harbisson described how he was trying to ignore colors as a child and how difficult it was. Now he feels the range of colors, invisible to ordinary people. He thinks that cyber body modifications will be widely used in the future. For example, people will be able to feel ultraviolet and decide when it is time to leave a beach.

“I’ve found out that in 1675 Isaac Newton created a theory, in which he tied every color of the rainbow to the musical note. I got interested in a connection of color with sound. Every color has its own frequency and this frequency has its sound. Therefore I should create a system that allows hearing a sound of color – that’s what I exactly did in 2004,” Neil explained.- “We could make a contact with other species because they do have many senses, we don’t. If you have a night vision, you won’t waste energy to create artificial light. If you can control the body temperature, you won’t need heaters.”

He also told the audience that with the help of NASA transmitters, he studies the colors of space and there are many colors he has not “heard” on Earth

Glib Zagoriy added that cyber modifications of the human body are among possible directions of the medicine of the future.

“My company has been already not only looking into modern technology but also started actively investing in it,” – the owner of Darnitsa said.

#MeeTheFuture – is the termless cycle of lectures, initiated and supported by the Zagoriy Family Foundation. The main goal of the project is to introduce the active and creative part of the Ukrainian society to the latest and emerging global trends.