Putin is hysterical. He does not communicate with his inner circle because he is afraid that he would be overthrown - deputy Goncharenko 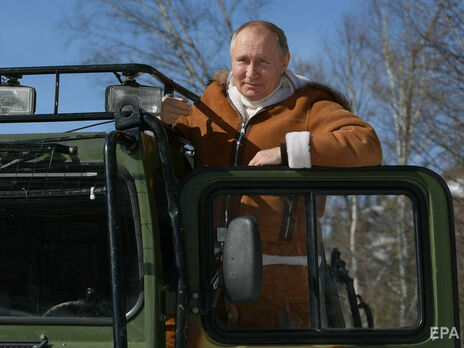 According to a deputy from the European Solidarity party, Oleksiy Goncharenko, Russian President Vladimir Putin has fired Valeriy Gerasimov, head of the General Staff of the Russian Armed Forces. The deputy wrote about it on Facebook on 26 February.

"Putin is hysterical. He has moved to a bunker. He does not communicate with his inner circle because he is afraid that they will try to remove him from power. Putin hoped that he would take over Ukraine in a day. But it didn't go that way. Putin envisioned a high-speed game, but his army got stuck, underestimating the Ukrainians. And when the occupiers are met with fire and missiles, the leadership solves the problem with nothing but firing," Goncharenko noted.

He added that "the enemy begins to feel the problems even from his bunker".

On the morning of February 24, Putin announced the invasion of Ukraine by Russian troops. He stated that the goal of the Russian Federation was the "demilitarization and denazification" of Ukraine. At about 5:00 a.m., Russian armed forces attacked Ukraine from the south, north (including Belarus), and east. They began firing at Ukrainian positions in Donbas and carried out missile and bomb strikes on a number of airfields and other military facilities.

Ukrainian Foreign Minister Dmytro Kuleba said that Putin had launched a full-scale war against Ukraine and called on the world to react.

Ukrainian President Vladimir Zelensky declared a state of martial law throughout the country in the morning of February 24, and general mobilization at the end of the day. He called on Ukrainians not to panic, "to do whatever it takes to support the Armed Forces of Ukraine," and promised that all those willing to defend Ukraine will be given weapons.

According to the latest data from the Ukrainian Ministry of Health, since February 24, when Russia invaded Ukraine, enemy shelling has killed more than 210 Ukrainians, including six children, and injured 1,100.

The enemy, as Zelensky stressed, is suffering from serious losses. According to the Office of the President and the General Staff on the morning of February 26, 3,500 occupiers were killed in the first two days, 14 Russian planes, eight helicopters, 102 tanks, 536 armored fighting vehicles, 15 cannons and one Buk SAM system were destroyed. The Russian Defense Ministry does not report casualties.

Russian troops are attacking civilian neighborhoods, kindergartens, and hospitals. According to the Ukrainian side, the Russian Federation is using Grad and Uragan multiple rocket launchers in Ukraine.

The occupying forces have already approached Kiev. On 25 February, the mayor of the capital, Vitaliy Klitschko, said that the city had entered the phase of defense, with gunfire and explosions being heard in some areas. The authorities urged Kiev residents to stay indoors - at home or in shelters.

Because of the Russian invasion in Ukraine, Western countries have imposed sanctions on Russia. Restrictions included large Russian banks and a number of officials close to Putin and their children. After Russia refused to stop its aggression against Ukraine, the EU, the US, the UK and Canada decided to put Putin himself on the sanctions list. In the coming days, some Russian banks will be cut off from SWIFT, and sanctions are also being prepared against the Russian Central Bank.