Press center of ATO: Militants shelled the passenger bus near the village Volnovakha 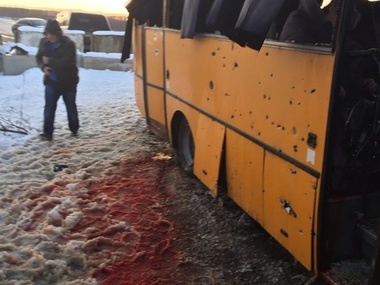 As a result of direct hit 11 people were killed, 17 victims are on hospitalization
Photo: Vyacheslav Abroskin / Facebook

The press center of ATO confirmed the information of the Ministry of Internal Affairs that the bus was directly hit from Dokuchayevsk which is under control of pro-Russian fighters.

Fire on the passenger bus near the village Volnovakha in the Donetsk region was applied from the multiple artillery rocket system "Hrad".  This was reported on the page of the press center of anti-terrorist operation (ATO) in Facebook.

The press center of ATO confirmed that information that the fire started from the district of the village Dokuchayevsk.

According to a command staff, in this area there are no positions of the Ukrainian military. It testifies, "that terrorists consciously opened fire on civilians". According to the Ministry of Internal Affairs (MIA), pro-Russian fighters aimed at a post of forces of ATO, but missed the shot.

The passenger bus was shot yesterday around 14.30. As a result 10 civilians were lost, 13 more got wounds. As it is reported on the site of Donetsk regional public administration, victims were taken to the central regional hospital in Volnovakha. "They are provided with all necessary drugs", – reported the administration.

OGA: The number of the dead at attack of the bus near the village Volnovakha grew to 11

On hospitalization there are 17 victims.

In hospital the woman who was injured during the attack of the regular bus near the village Volnovakha died.

It is noted that the woman got serious wounds and was taken to hospital in a critical condition. Doctors fought for her life, however they did not succeed in rescueing the victim.

Thus, the number of the victims of Volnovakha tragedy is 11 people – four men and seven women.

Also there are 17 victims on hospitalization, 16 of which are in Volnovakha, and one was transported to Mariupol.

Volnovakha is under control of the Ukrainian army, but militants from the so-called Donetsk national republic managed to fix their positions in Dokuchayevsk in September of last year. The distance between the cities is about 30 km.

Since December 9, 2014 "the quiet regime" acts on Donbass conducted by the president's team of Ukraine of Petro Poroshenko . According to National Security council and defense of Ukraine, leaders of the illegal paramilitary groups operating in the east are acquainted with arrangements on a ceasefire regime.

The command staff of anti-terrorist operation declares that militants regularly break the "quiet regime". For the last month, according to the General Staff, they opened fire 877 times.