Bucha completely freed from the occupants 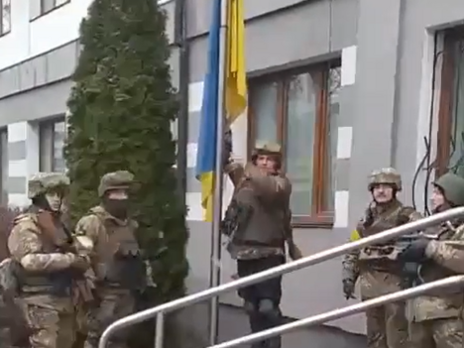 The Armed Forces of Ukraine have completely liberated the town of Bucha in the Kiev region from the Russian occupiers. This was reported by the Verkhovna Rada Telegram channel. Also, a video was published by the city council of Bucha.

"An important victory! The city of Bucha near Kiev has been completely liberated from the occupiers! The Ukrainian flag is already flying over the city", – the message says.

The Ukrainian flag was raised near the city council building.

On the morning of February 24, Russian President Vladimir Putin announced the invasion of Ukraine by Russian troops. He stated that the goal of the Russian Federation was to "demilitarize and denazify Ukraine". At about 5:00 a.m., Russian armed forces attacked Ukraine from the south, north (including Belarus), and east. They began shelling Ukrainian positions in the Donbas and carried out missile and bomb strikes on a number of airfields and other military facilities. Russian troops are attacking residential neighborhoods, kindergartens, and hospitals. The Russian Federation also used Grad and Uragan multiple-launch rocket systems in Ukraine.

As of February 28, 352 civilians were victims of Russian aggression, and 2,040 people were wounded. As of March 2, 21 children were killed.

Ukrainian President Volodymyr Zelensky reported that the occupiers had been targeting civilian infrastructure since the first hours of the invasion. According to the president, the actions of Russian occupation troops in Ukraine have signs of genocide.

According to the Ukrainian authorities, as of the evening of March 2, the occupiers lost almost 9,000 troops. Dozens of aircrafts, helicopters, artillery systems, hundreds of armored combat vehicles and other equipment of the Russian army were also destroyed. The Ukrainian authorities did not disclose the number of captured occupants.

On 2 March, the Russian Defence Ministry reported that 498 Russian servicemen had been killed.

On February 27, Ukraine filed a lawsuit against Russia with the International Court of Justice, demanding "to hold Russia responsible for distorting the concept of genocide to justify aggression". International Criminal Court prosecutor Karim Khan personally initiated an investigation into Russia's invasion of Ukraine. By March 3, 40 countries had already filed lawsuits against Russia.