Hryhoriy Kozlovskyy, president of FC Rukh, handed over six trucks to the military 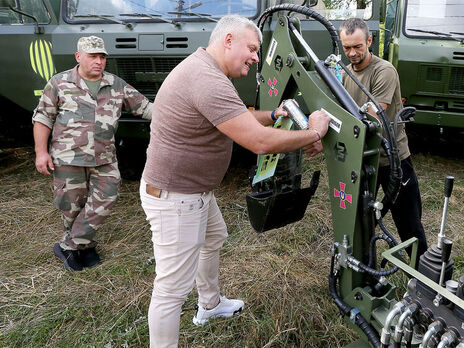 Hryhoriy Kozlovskyy: This is a small thank you to great people, thanks to whom we can now live our lives to the fullest, do what we love
Photo: fcrukh.com

The president of the Lviv soccer club Rukh Hryhoriy Kozlovskyy handed over six military trucks, an excavator, camouflage nets and 20 radios to two Lviv brigades of the AFU. This was reported on the FC website on August 31.

"The soccer club Ruch does not stand aside from the problems in our country. We willingly join to help our army. I am glad to report that we have purchased six brand new military trucks in Italy. I communicated with our military, they are satisfied. We have put club branding on the cars, because we are very pleased to be a small part of those soldiers who are now at the war front. There will be a battle and that battle will be a winning one for us!" – Kozlovskyy said.

He added that helping the army is a thank you for fighting the invaders.

"I want to thank those people who are now fighting for our independence. It's such a modest thank you from us for being able to play football. It's a small thank you to the big people, thanks to whom we can now live to the fullest, do what we love. I know that in the war zone there are a lot of fans of different clubs who are not only concerned about the fate of the country, but also the fate of Ukrainian football. We are waiting for everyone with a victory! May they come back alive and healthy", – said the president of FC Rukh.