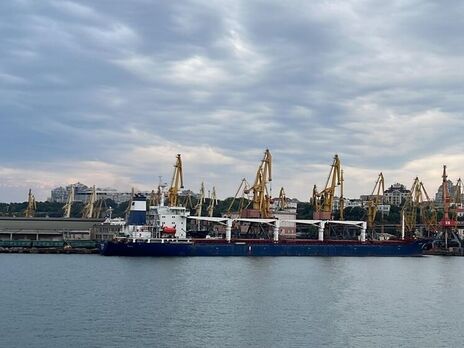 The ship is filled with corn
Photo: Oleksandr Kubrakov / Facebook

On the morning of 1 August, a ship with food supplies left Odessa port – the first after agreements were reached to unblock exports from Ukraine. Infrastructure Minister Oleksandr Kubrakov said this on Facebook.

This is the Sierra Leone-flagged bulk carrier Razoni. The vessel is heading to the port of Tripoli in Lebanon.

"It will move along a corridor which safety has been confirmed by our guarantor partners - the UN and Turkey. It has 26,000 tonnes of Ukrainian corn on board", – Kubrakov wrote.

He published a video of the dry cargo ship departing from the berth.

"Ukraine is the fourth largest exporter of corn in the world, so the ability to export it through ports is a huge success for global food security. Today, Ukraine, together with its partners, is taking another step towards preventing global hunger. Unlocking the ports will provide at least $1 billion in foreign exchange earnings for the economy and an opportunity for the agricultural sector to plan next year's sowing season", – he added.

Kubrakov thanked the Ukrainian Armed Forces for the opportunity to negotiate on Ukraine's terms and partners for working to unblock exports.

"Sixteen more ships are already waiting for their turn in the ports of Greater Odessa. These are the vessels that have been blocked since the start of Russia's full-scale invasion. In the meantime, we will receive applications for the arrival of new ships to load with agricultural products. In the coming weeks, with the support of our partners, we plan to reach the full capacity of transhipment of agricultural products", – he added.

Razoni will arrive in Istanbul on August 2, Anadolu writes, citing a report from the Turkish Ministry of Defense. After checking off the Turkish coast, the ship will continue its journey, the ministry said.

On 22 July, Turkey hosted the signing of mirror agreements on the sea export of Ukrainian grain (Ukraine signed the document with Turkey and the UN, Russia mirrored the same). The Interfax-Ukraine news agency, citing the text of the document, reported that the agreement covers safe shipping for exports of grain, products and fertilizers from the sea ports of Odesa, Chornomorsk and Pivdenyy within 120 days of the signing with the possibility of extending this period.

"The parties will not undertake any attacks on merchant and civilian vessels or port facilities involved in this initiative", – the document said. Nevertheless, on 23 July, Russian occupiers attacked the Odesa commercial seaport with Kalibr cruise missiles. After that, insurance fees for ships carrying Ukrainian grain went up by 200 times.

On 27 July, the Ukrainian Armed Forces Navy informed that operations in the ports of Odessa, Chernomorsk and Pivdennyy had resumed.

Ukrainian Infrastructure Minister Oleksandr Kubrakov said on 25 July that Ukraine plans to export up to 5m tonnes of grain monthly through the Black Sea from three seaports. If Russia continues shelling port infrastructure, Ukraine will switch to Plan B, he added.

Agrarian Policy and Food Minister Mykola Solskyi said on 25 July that Ukraine now has $10bn worth of grain to export. This figure may rise by another $20bn by the end of the year.

On 29 July, Kubrakov said that 17 ships are being loaded with grain, 10 of which are already ready for shipment.