Austrian doctors: We need precise information on the wounded on the Maidan so that we could take them for treatment to Vienna 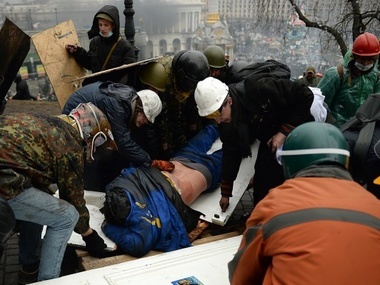 The wounded on the Maidan can get medical treatment abroad
Photo: vsviti.com.ua

Seven Ukrainians injured during skirmishes on the Maidan are being treated in Austria now. Clinics can accept more patients, but Ukraine must organize the process from its side.

Volunteers from Vienna were confused: how can they know who needs help, where the wounded are, and what diagnoses they have? At the least, a single database of the wounded must be created for the doctors to get answers to these questions and to decide who needs their help in the first place. Doctor Tatiana Khomenko-Kostiv who works at Vienna Central Clinical Hospital commented on this in an exclusive interview for Gordonua.com . 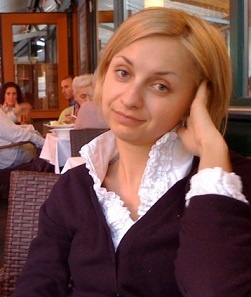 Tatiana Khomenko-Kostiv – one of four volunteers from Vienna

– Who selected the patients and how? How were the decisions made that these very people need to be taken to hospital in Vienna?

– The main problem was that we did not know where to look for the wounded. We understood that they were somewhere there lying in hospital, but no one knew anything for sure. It was some kind of surrealism for me. We agreed on financing because one day at the Vienna hospital costs EUR 800.

We agreed on the transport because we understood that there could be seriously injured patients. And we decided as follows: we will meet three days later, and each of us will use this time to find contacts of those who need help.

Despite all our contacts, friendship with journalists, my old acquaintances at Kiev Medical University where I studied, we could not find anyone at once. All your friends promised to help, they said Kiev was in chaos, but the first lists were drawn up, and well-known names were on those lists. But days passed and we did not get any information.

We found our first patients quite by chance. The uncle of one of our organizers, Roman, was in Kiev hospital. He started talking with a girl there, and she said that she was a volunteer, that they were engaged in these activities and had already sent a few people to the Czech Republic. She began to send hundreds of names with short notes on the diagnosis.

– Tatiana, what did you do with the first patient lists?

– We started writing official letters and calling the clinics to find out which patients we can accept here. Not everyone can be transported, it is simply dangerous for some of them now. As a result, we have compiled the first list of six persons who were supposed to come to Vienna.

We urgently translated clinical records and a big problem was that nobody provided X-ray pictures in the beginning. I think that it was a fatal mistake.

One of these six patients has not arrived in Vienna as a result. The best Austrian surgeon looked at his X-rays pictures and wrote: "What is there to treat?" Everything was done perfectly. The patient did not need any further interventions, they could only do harm. He had a gunshot wound in the knee, and a second surgery may be needed only in case of complication, if something is not knitted. Every additional surgery increases the risk of inflammation.

I personally called this young man explaining that he had to make another X-ray image four weeks later, and then it would be clear if anything else had to be done. A day later when five patients arrived here, I found out that this wounded man was taken for treatment to Israel. 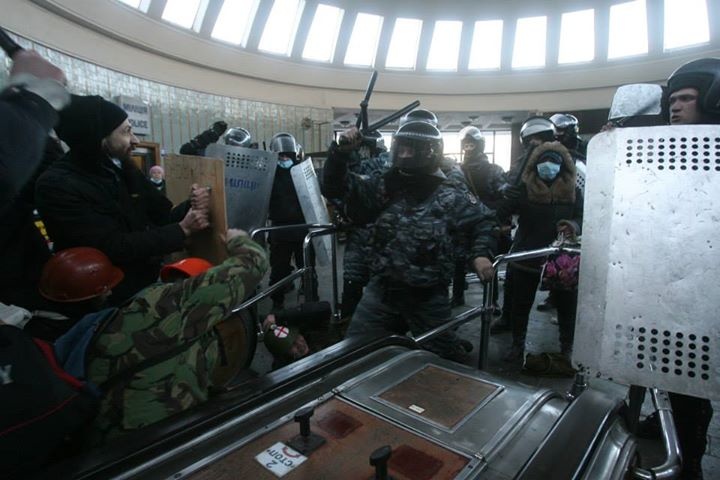 Skirmish with Berkut at the "Khreshchatyk" metro station on February 18

Anton Kovalyov who was injured in Kiev on February 18 joins the conversation - Gordonua.com

– Anton, were you among the five patients?

– No, another victim and me were brought to Vienna before. In fact, we were part of the pilot project. I came from Lviv and got there from Kiev. I was wounded on February 18 in Institutskaya Street near the upper exit from "Khreshchatyk" metro station. There is a video of our skirmish with security forces on the Internet.

There is still a small rubber bullet between the eye and the skull, the surgery is scheduled for Tuesday. Then I will need to stay in hospital for five days, and the doctors will observe me on the outpatient basis for another week after that. I have been prepared for this surgery for a long time already, three CT scans were performed; doctors suspect that the bullet may migrate. I will be treated by the head of the department, a professor.

It is not true that we want to help only people from the Maidan!

– Tatiana, what happened to the second group of victims?

– These five patients were picked up by ambulance cars right outside the aircraft. Many of them did not even have a foreign passport – there was a sheet of paper with a visa in their Ukrainian passports. We found people on the Facebook who agreed to come to the airport at night and help with the translation. The next day, doctors examined them, performed X-ray scans and told that everything had been done fantastically.

Ukrainian doctors are worth a monument, they are great. Many of the patients can be treated in Ukraine. Austrians are shaking their heads and saying, that we have to wait until everything knits together. These are bones, this do not heal overnight.

– It turns out that not those people who needed help came to Austria?

– Not really. There are people with serious eye injuries. On Monday, there will be corneal transplantation surgery, donor tissue has already been found. This is a very complex operation lasting for two hours and a half. Therefore, in such complicated cases we do see that we can be helpful. And our doctors are doing their best. But I feel sorry for those people who have come here, who endured pain and discomfort on their way here while they just need some rest to recover. You can make an X-ray and forward it here, and we will decide where you need to bring the patient here or not. It is very important for everybody to understand it.

– Anton, did you get help in Ukraine?

– Viennese doctors pointed out the very high level of care I was given in hospital in Ukraine. They said that they would not have achieved a better condition given the time and injury. They said is about other patients, too, so our doctors were up to the mark.

– Do you remember what happened to you after you got wounded?

– The shot was at close range, so I was hit with many bullets – three in the face and most of them in the shoulder. They got the bullet from the face, but the one in the eye is still there. I also got hit at the head with a bludgeon, but it is not so critical as compared to the shots. I went down the escalator, there was a volunteer – a graduate student of a medical university. He pulled me immediately, put me in an Automaidan car behind the barricades and took me to the Alexander Hospital. There I underwent a minor operation, the wound entry was stitched. The next day, I was taken to Lviv in a minivan – deputies helped with this.

My wife was called from the police the same night when I was brought to hospital: she was asked where I had been wounded and where I was then. But my wife refused to answer. I was taken to Lviv in a roundabout way, through some villages because there were checkpoints everywhere on the roads. I was taken to Lviv because I was in a relatively normal condition, and a lot of wounded in a very grave condition came on February 19, and I just had to give place to others, people were already lying in the corridors. I was not going to another hospital, I just vacated the bed for new patients.

– Tatiana, if people who could be treated in Ukraine were sent to your hospital, it means that you did not help other more severe patients?

– Let's treat it in a proper way. The whole country has faced a shock, and everyone understands that something needs to be done now. Sometimes we do just in order to do something. This is my basic request: do not do it! It is doctors who must decide who should be sent for treatment abroad and should not. They are people who understand what is going on with the patient and what therapy he needs. Thanks to all volunteers, they provide lists and work with people. But more precise information is required now. And it should come from doctors.

Seven victims from Ukraine are now treated in Austria, clinics are planning to accept another 14 persons.

– Do you accept patients only from Maidan?

– Currently, Ukrainian patients from Maidan are treated at five Austrian hospitals. Our military hospital is ready to accept 10 patients. I was addressed by Kiev military hospital, there are wounded servicemen from the internal troops. I have their names and even numbers of mobile phones. We are now deciding which of them we can help, who really needs our treatment.

For example, one of them, a soldier of the Internal Troops, needs prosthetics, his leg was amputated. It is premature to talk about prosthesis so far, he needs treatment in Ukraine in the meantime. It is not true that we only want to help people from Maidan. I give a list of patients to doctors and translate their clinical records correctly for the doctors to see the real picture.

It makes no difference to me which region the victim comes from or on which side he fought. First of all, they are people. And it is not up to me to judge them. We said that we would help as much as we can.

The Ministry of Internal Affairs of Austria has sent medicine and equipment for 60 thousand euros to Lviv hospitals where the wounded are treated now. Gordonua.com was informed about this by Aleksandra Saenko, a member of the group of volunteers in Vienna who is responsible for relations with the Austrian Embassy in Ukraine. According to her, the Ambassador Extraordinary and Plenipotentiary of the Republic of Austria to Ukraine Wolf Dietrich Heim held talks with the representatives of Austrian companies working in Ukraine. They expressed their willingness to allocate a five-figure sum in euros for the treatment of victims. For this assistance to be targeted and as effective as possible, the sponsors need to get accurate information about patients: what treatment they need and how much money it costs.

– It turns out that the assistance is provided by the Central Hospital of Vienna and the military hospital?

– Christoph Schönborn, Archbishop of Vienna, promised to address private hospitals that can provide assistance. Some have already agreed, and there is an outstanding surgeon in one of them who specializes in liver surgeries. A Ukrainian patient with a lot of debris in the liver needs his help very much; he is in a relatively stable condition, and he can be transported here.

There is another patient in a grave condition, no hospital agreed to take him in. It is very difficult to transport him because he is intubated. We are now deciding whether he can be transported by train. There are surgeons who can operate on him, and there are sponsors who are ready to pay for this. It means weeks and even months spent in hospital. 7 victims from Ukraine are now treated in Austria, we are planning to accept another 14 persons.

I would like to emphasize the most important thing for today: decisions must be made individually for each patient and each hospital. It is important that officials at the Ministry of Health of Ukraine should understand it and volunteers should react to it.