Doniy: The society believes that after the repeal of immunity MPs will become more responsible. It is an illusion 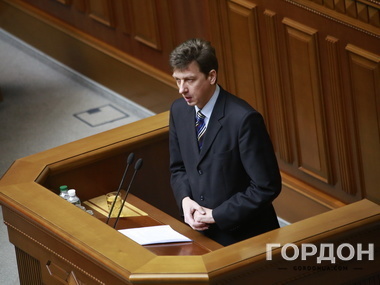 Doniy believes that the abolition of immunity does not change the situation
Photo: Alexander Khomenko / Gordonua.com

Ex-deputy of Ukraine Oles Doniy believes that instead of solving the real problems of the country, the power givess society attractive ideas, such as the removal of parliamentary immunity, which do not change the situation.

People's Deputy of Ukraine of VI-VII convocations Oles Doniy believes that under the current circumstances the abolition of parliamentary immunity will create only an additional mechanism of pressure on MPs. He said this in a comment to "GORDON" .

"If the government does not want to deal with the economy and implement reforms to improve the economic climate, if it does not want to look for opportunities to leave the military zugzwang in the East, it gives the population from time to time some popular ideas, which attract attention, but do not change the situation," - says Doniy.

"Oligarchy, which affects the government and the Presidential Administration, from a formal point of view has no immunity, as well as any minister, but that does not mean that there is a real mechanism for bringing them to justice," - said Doniy.

According to ex-deputy, the abolition of immunity will not have the intended effect wich the society is waiting for.

"There are two problems. First - this is how to influence the Verkhovna Rada, which is completely divorced from reality. The society believes that after the repeal of immunity MPs will be more mundane and more responsible. It is an illusion," – Doniy added.

"You will see another mechanism of pressure and influence on the deputies from the government, the president and actually their subordinate security forces. There are few people with principles among the deputies, very few can tell directly in the eyes of the president that he was wrong. Consequently, there will be another mechanism of influence on those who can not do it "- Oles Doniy highlighted.

"But society has to go through this illusion, and I think that the abolition of immunity, in the end, will show people that not because of this mechanism the Parliament is full of businessmen, oligarchs and unprofessional idlers. For society, it will be a lesson that everything is much more complicated and deeper here" - the former deputy concluded.