Erofeyev: Do you think that the Russian aggression will stop if Putin disappears? You are naive, indeed 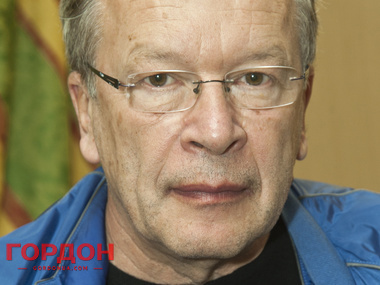 It is not the propaganda that influenced the Russian population. It has always been convinced that the Ukrainian Maydans were organized by the Americans, now Putin just told them, ‘You are absolutely right, people’, said the Russian writer Viktor Erofeyev in his interview for the GORDON.

Little more than a month ago, the famous Russian writer Viktor Erofeyev published the essay called "How to live on here?" that outraged Putin hurrah-patriots. The TV propagandist Dmitry Kiselyov even devoted a report to Erofeyev, creatively “reconsidering" the main messages of the article.

‘Viktor Erofeyev's text is genuinely impregnated with contempt for the Russian people,’ Kiselyov expressed his indignation. ‘We can find "our fundamental racism" and "people delighted with bans". And the highest note of the Russian writer Viktor Erofeyev to his own people: our people is "a coffin with the decaying giblets". Contempt for the people already turns into disgust for it".

Viktor Erofeyev, the author of the short story "Life with an Idiot", novels "Russian Beauty" and "Encyclopedia of the Russian Soul", was born in a family of the Soviet diplomat, Stalin’s personal interpreter Vladimir Erofeyev. The future writer spent his childhood in Paris. Yet in the Soviet Russia he was expelled from the Union of writers twice, once "for the organization of uncensored almanac "Metropol" in samizdat. Erofeyev's books were not published in the USSR until 1988. After the collapse of the Soviet Union, Viktor Vladimirovich became one of the most demanded Russian writers in the West.

In the exclusive interview for the GORDON edition, Erofeyev spoke why the reason of the Ukrainian-Russian conflict does not lie in Putin and about the archaic consciousness of the Russian population who are not ready to accept both the Western values and the European Ukraine.

– Many people in Ukraine are convinced: if Putin disappears, the Russian aggression will stop. Do you think so, too?

– You are naive, indeed. People with big power (and Putin’s power in Russia is almost limitless) train their successors and mould new figures. There are a lot of people in Putin’s surrounding who completely share his views in relation to Ukraine.

I am not sure at all that when Putin grows old and leaves his office, a person believing in the Western values will take his place. It will not happen. Really democratic changes in Russia will last for many years, and they will begin only if new Peter the Great comes into power with his compulsory pro-European reforms. There is no sign of him so far. But the new Russian Empire demands Ukraine. It is at most, and what it needs at least is the overland corridor from Russia to the Crimea.

– But why did the Russians so joyfully catch up the rhetoric of the Kremlin? Why does Ukraine cause so much aggression in them?

– 2014 was like an acid test, very much was revealed in the soul of an average Russian. It appeared that the overwhelming part of the population professes absolutely anti-Western, antidemocratic and anti-liberal values. And it has nothing to do with TV propaganda, it is about very archaic Russian values.

Nobody was cherishing vain hopes when a person who has been engaged in the intelligence service became head of the Russian Federation. Nobody thought then that he will instill European values in Russia. We must give a bow to the ground to Boris Yeltsin who "presented" us with such a gift.

It is not the propaganda that influenced the Russian population. On the contrary, to the pleasure of a huge number of Russians, Putin finally started articulating what many Russians believe that is that all Ukrainian Maydans were organized by Americans. The Russian population has always thought so, but now the head of the state told them, ‘You are absolutely right, people.’

– That is the Russian government was more liberal than the people before 2014?

– Quite right. Putin was approaching the West with cooperation offers, but two things happened then: one is not connected with Ukraine, and the other is.

Firstly, Putin was disappointed with the Western friends, he understood that he had been betrayed when Europe supported the protest movements in Russia in 2011-2012. These were not just protests, these were anti-Putin movements. The West openly let it understand that it would like to see a normal European state instead of Putin's Russia.

After 2011-2012 Putin, turned his back on Europe and actively started building the Russian Empire as a counterbalance to the West.

– It is the first reason why Putin sharply turned away from the West. What is the second?

– Ukraine is a very important a cornerstone element for the construction of the new Russian Empire. Your country was part of the Russian Empire, it was in the Soviet Union. Frankly speaking, Ukraine did not move away from Russia after the collapse of the USSR. All corrupted Ukrainian leaders (maybe, except for Yushchenko who failed to take advantage of the situation) played with Russia all the time, conducted secret negotiations whose details we still do not know.

When, through Maidan and revolution, Ukraine actually broke off the relations with the corrupted Yanukovych's regime and headed towards the constitutional state, the President of Russia felt deceived again. At first, he was betrayed by the West, and now by Ukraine. Putin considers that it is the West that imposed its values on Ukraine, rather than that it adopted them integrally. It is Putin’s serious mistake.

– I can understand that the person who served in KGB does not believe that the people can organize itself. But how about the Russian intellectuals who expressed support to Putin's policy, are they also convinced that Maidan was organized by the Western intelligence services?

– There are a lot of my friends and acquaintances among the writers, directors, actors, and musicians who signed the letter of support for Putin: Pasha Lungin, Yuri Bashmet and others. They frankly admit that the state supported them, and now they have to support the state. They justify themselves this way.

Among the signers, there are also people who really defend the Russian imperial idea, and consider Ukraine as a younger brother. There are also outright ultranationalists, like Alexander Prokhanov who is convinced that Russia has to turn virtually into North Korea, and Putin's regime is too liberal. This is a shameful phenomenon for the 21st century, but not new at all: in the Soviet period, writers demanded a firing squad for Bukharin or Trotsky.

There is nothing to be surprised with, the intellectuals in Russia have always been split. What surprises me more is that Maidan survived the severe winter of 2013-2014 and won. It is incredible heroism. Of course, many stupid things were done afterwards, Ukraine could save the Crimea and avoid the conflict on Donbass in case of a more sensible political game. But, unfortunately, you have a weak and small layer of intelligent people. Ukraine should build up intellectual political muscles to defend the European future.

– Did not Ukraine defend its pro-European course yet?

– Unfortunately, I do not see the end of today's conflict. I do not see a situation when Russia will leave Ukraine alone. I think Putin will not calm down until he wears out Ukraine. It will not finish in Donbass which is now all smoke and blood. It is an extremely dramatic situation.

Ukraine must analyze the archaic Russian consciousness deeply and from all perspectives. You should not be light-minded about it: say, Russian’s have all gone crazy. I repeat, it is not about Putin, it is about the archaic consciousness of the Russian population. Without understanding this, Ukraine, like Don Quixote, is doomed to fight against windmills and to lose much.

– Over 20 years have passed after collapse of the USSR, a new generation of Russians has grown up who have traveled and studied in the West. Will not they ever change the archaic antidemocratic Russian consciousness?

– Never say never. About 15 percent of population in Russia share democratic values. It is a small figure, but a constant one. Nobody has ever brought up Russians in the spirit of the Western values. Nobody has done it with the Ukrainian society either, but part of your territories are historically connected with Europe.

If at least 50% of the population of Ukraine share the Western values, this figure is only 15% in Russia. After perestroika and collapse of the USSR, nobody paid attention to the consciousness of 85 percent of Russians who did not share the European values. It is a big mistake of the liberals and democrats who came to power after 1991. Egor Gaidar, Anatoly Chubais, my friend Boris Nemtsov were engaged in reforming, but they did not understand 85 percent of Russian citizens.

I really do not understand how it is possible not to share normal human values in the 21st century, for example, that the person is more important than the state; that the state must serve people, and not vice versa; that the state should not be sacralized, and so on. The Ukrainian Maidan defended these positions, but even in Ukraine with its historical European past, people had to shed blood protecting democratic values.

– What do you think, how much will the conflict in Donbass last?

– We are speaking in a hard and sad time. My wife has distant relatives who are citizens of Ukraine. One of them is at war on the side of the Ukrainian army, the other is on the side of the separatists. It is a fratricidal war. Poroshenko is right trying to reach a truce. War claims huge numbers of lives. Time will pass and nobody will remember who the impostors in Donbass killed and why.

I sincerely believe that Ukrainians are doing well because they understood: 21st century is an era of European values that you both understand, defend and will manage to observe. But nobody knows what the price will be.

– Have you never thought of final emigration from Russia?

– If they press and bother me, probably, I will seriously think of leaving. But I live much in the West, in Paris, and therefore I know: it is more interesting for the writer to live in Russia where everything is naked and much can be understood about the human nature. The Western society is more reserved, it is more difficult to understand human soul there. So Russia is a paradise for a writer, though a very risky one.

Besides, the Russian writer has to do everything to play the pacifying role. Especially now. My daughter Maya is half Russian, half Ukrainian. I want her both halves to remain in harmony. Therefore, I do everything for such a huge region as Russia to develop towards human values.