Portnikov: Putin has already understood that he will not return Ukraine in any other way except for the military and terroristic one 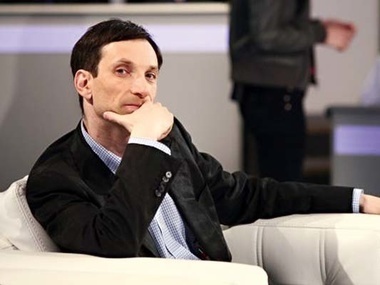 A "middle option" when Donetsk and Lugansk are formally part of Ukraine, while they actually remain under the Russian protectorate, cannot exist for a long time, considers the Ukrainian publicist and journalist Vitaly Portnikov.

‘It is too early to ask what new borders will be between Ukraine and territories that are now controlled by the Russian saboteurs, and to speak about whether it will be a front line or a demarcation line, or if it will actually be a new frontier separating Ukraine from the territory of the Russian Federation as it is the case with Abkhazia and South Ossetia,’ the journalist Vitaly Portnikov said in the comment for GORDON.

‘What can we now be certain about? That Vladimir Putin does not need the territory of the so-called national republics in their current form. It does not give any opportunity to actually influence Ukraine. It is only small part of the territory not only of the whole country, but even of its eastern part that was supposed to become Novorossiya according to Vladimir Putin's plan. This territory creates serious problems from the point of view of maintaining of the Western sanctions that, at the background of oil price reduction, become a new trial for the Russian state budget which is already in a difficult situation,’ Portnikov said.

In his opinion, it creates a serious threat for criminalization of the situation in Russia itself.

‘If there is no real frontier between the so-called national republics and the main territory of the Russian Federation, and it will be a zone for transfer of weapons and bandits as it is today, it can cause serious destabilization in the south of Russia,’ the journalist reported.

According to Portnikov, Putin does not know how to get out of this situation in a political way. ‘Besides, he may want to retain the regions that are now controlled by the Russian bandits as a springboard for further attack of the East of Ukraine. Putin may have an idea that in case of deterioration of the economic situation in our country, when the popularity of both the government and the idea of Maidan and European choice will decrease, the society will start to think of coming to terms with Russia, satisfying its conditions in terms of Russian integration area, or even Russia, and then DNR and LNR will be able to spread on the whole territory of Ukraine, at least on a large part of it,’ the journalist declared.

Portnikov considers that all options of the development of situation in the east of Ukraine are temporary. A "middle option" when these regions are formally part of Ukraine, while they actually remain under the Russian protectorate, cannot exist for a long time because Donetsk and Lugansk regions will not be separated from the territory of Ukraine.

‘Thus people who live there will rather quickly get rid of harmful ideological and political impact that the Russian bandits and propaganda have on them today. There can be a situation when Ukraine restores its influence in these areas, but they will remain the land of pro-Russian political forces in terms of elections. But again, I do not think that it will continue for very long,’ Portnikov said.