Professor Zubov: The Fall of Putin's possible in 2015. Serious phase of the crisis can begin in the spring or early summer 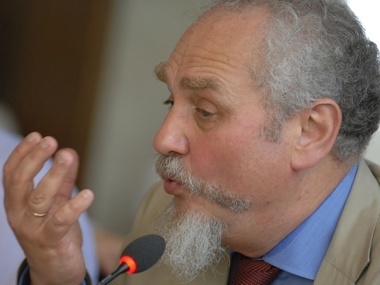 The next year will be a year of great reforms
Photo: msps.su

The next year will be a year of great reforms and of very hard life for people, but there is a hope that the war will be over, a Russian historian, philosopher and religious scholar Andrei Zubov thinks.

The fall of the Russian President Vladimir Putin's possible in 2015. This opinion was expressed in the comment to "Gordon" by Russian historian, philosopher and religious scholar Andrei Zubov.

"I guess that serious social crisis phase could begin in spring or early summer. You say that in Ukraine could happen the same? It is not improbable. As a historian, I can only say that legitimate power – both Poroshenko and Rada - in any case should not give up the reins, "– said the professor.

According to Zubov, now we need to seriously run the country, to not let it rollback into anarchy.

"It all happened in Russia in the 17th century, when Prince Lvov, after becoming a chairman of the Provisional Government, said that" the Russian people are so smart that they will lead themselves to the right place. And although I am a teamster, I’ll let the reins. "Now we see where he led Russia and Ukraine at the same time... Now you need a very serious management of the country. These are the laws of the revolution. After the consolidation of the Revolution of Dignity the country can be rolled back into anarchy when everyone will for his own interest, when everything will collapse, "- he said.

Historian believes that Ukraine will have a difficult period for several years.

"The revolution of dignity is the process of Ukrainian revival, it is not easy, its’ hard. To think that you will be in heaven the next year or in the position of Sweden or Austria - is very naive. You should expect a lot of difficult years. First of all you should come out on the road of systematic decommunisation and it has not even started yet. You threw over the statues of Lenin, you are fighting for your independence, but you must very structurally change the whole social and cultural part of your country, which, of course, is still the Soviet one"– said Zubov.

In his opinion, the best way out of this situation will be a joint movement of Ukraine and Russia to the European future.

"I think next year will be a year of great reforms and of very hard life for people, but I hope that the war will be over and that the new government of Russia will actively cooperate with Ukraine with all sense of guilt for what Russia has made to Ukraine. It seems to me, it will be the best prospect. We will go out of our past together and we will move to our common European future together "– the historian remarked.

According to Zubov the reconciliation of Russia and Ukraine is possible only after Putin will step down from power.

"With Putin, of course, we will not go to Europe, no one will take us there after what Putin has done. However, this and reconciliation with Ukraine is only possible after Putin steps down from power. But the negotiations and some reconciliation, some of Putin's leadership attempts to save themselves at the expense of concessions to the West and, consequently, for the benefit of Ukraine – it is quite real. It's real now. Today and the next few months, to a large extent related to the economic crisis, will show if regime is ready to compromise, and if it is ready to stand against the world "– the expert summed up .