Ex-Vice-President of the Russian Federation Rutskoi: Putin confirmed that more than 30 regular employees of CIA worked in the Russian government 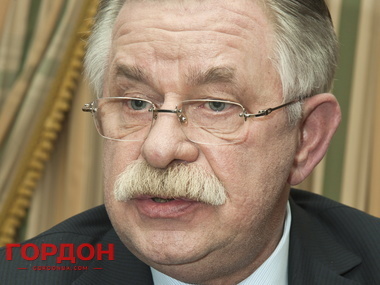 Alexander Rutskoi, first and last Vice-President of Russia, Hero of the Soviet Union, Major General of Aircraft, told GORDON why there will not be war "until the last Ukrainian" and how to return to peaceful life.

– Aleksandr Vladimirovich, you have been acting in mass media as an expert in the Ukrainian-Russian questions recently...

– Why not? Though I am a Russian politician, I was born in Khmelnytsky, I lived in Lviv until I was 19… I know both Western and Eastern Ukraine rather well.

I have just returned from NTV where I had a discussion with your politicians, People's Deputies of the Verkhovna Rada of different convocations Oksana Kaletnik and Lyudmila Suprun. We were speaking for another hour and a half after the program. They do not agree with me in everything, but nobody has any doubts regarding the need of the constitutional reform in Ukraine.

– Perhaps, it is first necessary to restore peace in the South-East that is now at war now.

– I warned long ago that the matter can end in the use of weapons. A year ago I was offered to participate in Savik Shuster’s show. I told everybody then (my words were followed by an applause!): "The most important thing, my dear, is to stop finding out who is Hohol (the Ukrainian) and who is Moskal (the Russian). Everybody who lives in the territory of Ukraine is the citizen of Ukraine. You have to do everything possible and impossible to preserve the country, to build up its riches. And you are sitting in the studio and trying to prove, often in a boorish form, your national identity".

I have a Russian father and a Ukrainian mother. So who am I? Who of my parents do I have to reject? Historically, all of us have mixed up, and it is silly today to find out who has which blood.

– Of course, our politicians have done a lot to split Ukraine. But does not it seem to you that the appeals to stop war should be addressed to the Kremlin rather than to the Ukrainian authorities?

– What is now happening in Ukraine is a consequence rather than a reason. Let us remember history: 1917, 1918, 1919… You remember, all the territory of the Russian Empire was involved in a civil war?

– Do you think that the European Union that supported the European choice of the Ukrainians needs a war with Russia so badly?

– It is not Europe that decides such questions today. Look at the German chancellor Angela Merkel: at first sight, her behavior is absolutely illogical. Who ruined the wall dividing Germany? Russia. And today they impose economic sanctions against Russia as a sign of gratitude? And why does the chancellor behave in such a way? Here is the answer. Where are Germany’s gold reserves? In the USA! The contingent of the American troops in Germany amounts to 100 thousand people, plus 20 thousand of the British troops. These are 12 divisions or three developed general-purpose armies. So who is the invader and aggressor? The United States with Britain or Russia?

– You are defending Putin's position with such zeal, but he does not appreciate it for some reasons. Was not it by his instruction that you have been removed from real politics since 2000? And in August 2014 again, you were not allowed to stand for the governor's elections in Kursk where you had quite good chances …

–What does it have to do with the head of the state? These are internal political games. Do you think that we do not have a fifth column here? It does everything possible and impossible to prevent me from meeting the Russian president.

– Repeatedly. I even published an open letter to him.

– After all, Putin is the successor of Yeltsin who laid the authoritarianism foundation in Russia, moreover he shot the White House in October 1993. Are not you in opposition to it?

– I do not know who spreads the heresy that I am an oppositionist. Why do I have to be Putin's opponent if he carried out a real reform of armed forces and our army is capable not only to protect national interests, but also to give help to another nation? It was Putin who stopped this crazy oligarchic system which was destroying Russia.

By the way, it is the problem in Ukraine. You should have stopped choosy oligarchs who are pumping resources out of the country. Just imagine: they have brought the country to a slaughter. If Putin stopped this dull, crazy privatization in Russia, nobody has done it in your country. Neither Kravchuk, nor Kuchma, nor Yushchenko, and Yanukovych – he decided to racketeer: instead of stopping this lawlessness and arbitrariness, he was engaged in racket captures of beneficial business projects. What should the people do in this situation? Should they find out who is Russian and who is truly Ukrainian? It is silly! We are people of one belief, we have one God, one history. We must make peace and stop spelling things out.

– And forget about the annexed Crimea? And give Donbass as a present for the “uncle”?

– I am sure: nobody will ever force Lugansk and Donetsk to live in one country with those who killed civilians because blood of relatives: children, fathers, mothers, is impossible to forgive. But life goes on, we must think of the future.

I suppose, it is necessary to hold a constitutional meeting and invite there all without exceptions: Lviv, Ivano-Frankovsk, Poltava, Zaporozhye, Odessa, Nikolaev, Dnepropetrovsk, and even Donetsk, Lugansk. To invite not only popular Ukrainian figures, but also experts such as lawyers in the field of constitutional right and to jointly develop a draft of normal constitution based on the principles of the federal structure. Then to submit it for an all-Ukrainian referendum. And after the Constitution is adopted, not a single scoundrel will have the right to change at least a line in it.

– What is your opinion why there are so many former defenders of the White House among separatists of "DNR" and "LNR" today?

– Even my middle son was going there. I hardly caught him, stopped him at the last minute. "Where are you going,” I said. “First raise your children, and then go to war." He has three, ll of them are very young. There are both Americans, and French, and Polish, and Czechs, and Swedes in Novorossiya. On either side. This is world, this is human nature. But the truth is always on the side of those who defends justice.

– It was promised to the Soviet people for 70 years. And leaders of the so-called people’s republics attract the voters with a certain updated form of socialism in the given territory. But economists consider that the attempts to turn history back are doomed to failure. Do not you agree with them?

– Let us leave these disputes to the scientists. Let us abstract from mutual accusations and we look just from human positions. Do you need the current Ukrainian-Russian conflict? No! And I do not need it either. And no normal person does. But we cannot just sit and wait, doing nothing.

I do not doubt, it is my personal forecast that Eastern Ukraine will form a separate state. They should not be part of Russia. Novorossiya is capable of getting on its feet if it gets some help. Now there will be elections in Donetsk and Lugansk, there will be legitimate power. Want it or not, Kiev will have to put up with this. If he does not want and continues military operations, everything will end in a sad way. Chain reaction will begin and there will be what happened to Yugoslavia…

And one more thing. Ukraine has already lost a fair share of GDP and if it thiese disorders do not stop, its economy will crash down by around 50 percent in half a year. It is very difficult to achieve a GDP growth by five percent, so it will need about 20 years to get out of this situation. Besides, 300 billion dollars will be required for restoration. Will the United States give you this money? No! Will Europe give this money to Ukraine? No! Where does the unfortunate people that was deprived of everything has to go? To Russia.