Volunteer Kasyanov: The enemy’s mission is to create a panic in our rear, unfortunately, our government is playing into their hands 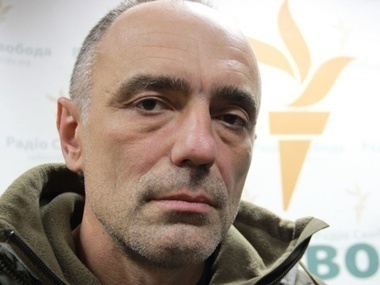 Introduction of the martial law may result in Ukraine remaining without its army, territory, and government that will demolished by the crowd, considers the volunteer of the Army SOS community and blogger Yury Kasyanov.

Pro-Russian fighters have a sole mission in the east of Ukraine – they try to create a panic in the rear, the volunteer of the Army SOS community and blogger Yury Kasyanov said in the comment to the GORDON .

"The enemy’s mission is to encircle and destroy the army, and not to seize territories. Its mission is to spread fear, to create a panic in our rear, and to destabilize the situation. It will be then that the masses will go and occupy the Presidential Administration and the Verkhovna Rada without any orders. Unfortunately, our government and our Commander-in-Chied is playing into their hands," Kasyanov reported.

The volunteer believes that the terrorists need Debaltsevo only to draw the Ukrainian troops into the so-called pocket.

"We need to answer truce violations with war and force. The terrorists’ main task is to destroy our army and to destabilize the country. They need Debaltsevo as much as we do. They try to draw our troops into the so-called pocket and systematically destroy them. I suppose that this pocket may be closed near Artemovsk and not even near Debaltsevo. The situation repeats itself after Girkin left Slavyansk. The enemy either did little to protect or simply surrender the towns that we occupied, such as Severodonetsk and Lisichansk. Its main task remains to defeat us completely. The terrorists systematically destroy the towns that are allegedly liberated. There is virtually nothing left from Debaltsevo, the same situation is with Popasnaya, Shchastye, and Stanitsa Luganskaya..." he said.

According to Kasyanov, the army command keep making the same mistakes.

"We are fighting, but we kind of have two persons on either side. It is Muzhenko on our side who gives orders at the front. Presumably, it is the chief of staff of the North Caucasus military district who is fighting on the other side. These two forces who control the armies keep making similar mistakes and right steps. We keep making the same mistakes characteristic of one and the same person and one and the same human weakness – cowardice of one person, and stupidity of the other person. All this somehow portrays our chief high command," Kasyanov claimed.

In his opinion, introduction of the martial law cannot mend the situation.

Kasyanov believes that, on the contrary, the martial law may ruin the country.

"What may the martial law do? We will talk less about it because there will be more censorship and more bungling. These ignorant chief and local commanders will have more freedom and will be able to do their foolish things not caring about society, and the army will be ruined. Ukraine will remain without its army, territory, and government that will be demolished by the dull, mad, enraged crowd. And I do not want it to happen," the volunteer summed up.