Babchenko: Putin's regime will cling to Belarus and Kazakhstan to the last. At least someone has to remain 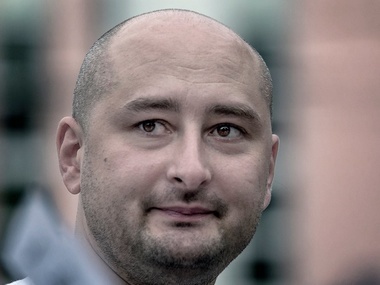 Babchenko: Let the Crimea people to live for a while and understand what has happened
Photo: Aleksandr Baroshyn / Facebook

The Russian war reporter Arkady Babchenko described in an exclusive interview to the GORDON what is happening in Russia now, why Donbass will return to Ukraine, and the Crimea will not.

The peninsula will not return to the structure of Ukraine in the following years. And Russia has nothing to do with it

– Based on the current situation, which way of development of the events in Donbass do you consider the most probable?

– I think that Russia will leave Donbass. It will still continue supporting it with weapon and, probably, people. Not necessarily military men, it will not stop people from going to this region. For some period of time, everything will hold on in the same state as now – with more or less established front line. Intensification of military operations is also possible. "Novorossiya" will hold on, but not long. Ukraine will restore power in these territories.

– And will it manage to return the Crimea?

– The peninsula will not return to the structure of Ukraine in the following years. And Russia has nothing to do with it. Yes, it was Russia that annexed the Crimea. But it will not be able back to push it back into Ukraine. The Russian Federation has to withdraw troops and state institutes from there. No problem! But what then? To enter the Ukrainian army there? I do not know whether it will cause resistance, but it will at least build up the tension and discontent. Give the Crimeans some time to live in Russia, to understand and to realize what has happened. Only after that there will be an opportunity to change something.

– Taking into account the amount of funds and forces Russians invested into the Belarusian defense, is it possible to consider Belarus as a base for attacking Ukraine? There have been messages in the recent days that Russian military men were noticed there.

– There will not be a full-fledged attack any more. Russia will have so many internal problems in six months that it will not have time for Donetsk, Ukraine or Belarus. On the other hand, I cannot assume what this power will do in an hour or in a week. They lost touch with reality. Of course, when there are a lot of problems within the country, it is time to begin a small victorious war. But this war will cause the regime to collapse.

– The current regime in Russia will cling to Belarus and Kazakhstan to the last, it will keep them around. At least someone has to remain. It is as if getting gold of a lifebuoy.

Ukraine has to understand why it needs Donbass, what it will do with armed people who live there now

– Do you think it is worth spending time on negotiations in Minsk if the representatives of the so-called "Novorossiya" are not even able to ensure the ceasefire regime?

– It is necessary to conduct negotiations with "DNR" and "LNR". Most people there are locals. Even if Russia leaves, it will be necessary to do something with them. It is impossible to kill hundreds of thousands people. It means that it is necessary to talk to them. Compromises and amnesty will be necessary. Ukraine has to understand why it needs Donbass, what it will do with armed people who live there now. There is such an impression that Ukraine does not understand why it needs Donbass so far.

It is interesting that it is not felt everywhere in Ukraine that there is a war. The farther to the west the less the feeling of war. Kiev keeps away, there is an impression in Lviv that the country is at peace. Though there are a lot of people from the Western Ukraine in Donbass.

– If Russia leaves Donbass what will happen to the imported weapon?

– Everything that came here will remain here. They will not take away equipment, weapon, and ammunition. The government should think now how they will solve this problem. After all, it is not so simple to take weapon away from a person. They will definitely not give it. It is not enough to send troops to the region. It will provoke resistance. A full-fledged army is required to conduct military operations. Ukraine still does not have it. The figure of 40 thousand people was voiced before. These are two divisions. These forces are not enough to solve such large-scale tasks as in Donbass.

The Ukrainian army and Ukrainian society are being shaped now, it will eventually entail formation of the Ukrainian state. The most important thing that has happened in Ukraine is that society was formed, a nation with common ideals. Now it is necessary to construct an effective governmental structure and enter the European Union.

Perhaps, several Russian-speaking states will appear in the territory of what is now called the Russian Federation

– When one looks at Russia from Ukraine, there is a feeling that not only the head of the state has lost touch with reality. What is going on in the country?

– There was really mass madness. "The Crimea is ours!" excited people very much, even those whom I had known personally for many years. I have never observed anything like that. There were no reasons for pride, there were no victories. We were building a democratic state – but we have not build it. We have lots of oil, but we have not turned into Arab Emirates. There is nothing to be proud of. On the other hand, we are big and great, we won World War II, we have the best ballet dancers. The propaganda kept imposing victorious symbols all the time – the Great Patriotic War, St.George's Ribbons… And suddenly we seize the Crimea. Why the hell does a Russian need the Crimea if he has never been there? The Black Sea which is exposed to fire from one coast to the other with all its exits well blocked? But it is a victory! Something suddenly changed. It became easier in the recent months – the first rupture is over.

– It means that people will sober up soon...

– They will sober up, but in the wrong sense. It is unlikely that there will appear a constitutional state with democratic values. There will not be Maidan for freedom and dignity, but rather Pugachev's hungry rebellions. Though I cannot exclude that Russia will suddenly turn towards democratic values. Whatever one may say, but at least half of Muscovites voted for Navalny at the elections. I do not exclude a chance of positive changes. I am an optimist and I trust in positive development.

– If you want to survive – you need to change?

– Certainly! Either changes or disappearance. Perhaps, several Russian-speaking states will appear in the territory of what is now called the Russian Federation. I am sure that they will choose the European vector all the same. I consider that the Russian Federation as it is now is a continuation of what began in 1913 after collapse of the Russian Empire. Then this structure turned into the Soviet Union. The Union collapsed, and now we are approaching the following stage of the collapse of the empire.

Putin was not lucky to be born around 150 years later. He would have made a brilliant emperor

– Have you been subject to pressure?

– There were certain difficulties before. Probably, they have other problems now. I do not conduct any activities, I do not provoke anyone. I am not an extremist! Write it this way! I want to remain in Russia. I want Russia to become a free democratic constitutional state. Eventually, it will become it. There is nothing to be glad with so far. The country is growing poorer and flying into a pit. It will be tougher than in 1991. Many problems accumulated, there is such hatred and obscurantism that it will not settle itself any more.

These are consequences of our choice, the result of the actions of the previous year, of the absolutely wild behavior of the power. Putin was not lucky to be born around 150 years later. He would have made a brilliant emperor. But he cannot use methods of the 19th century living in the 21st century and be a success. Nobody has ever managed it. But everyone has to receive what they want. All desires must come true. They wanted the Crimea – they got it! If they lived to adult years and did not understand that it is impossible to seize a piece of another country without punishment, they will get it now.

Ossetia was forgiven. Abkhazia was forgiven. They would turn a blind eye on the Crimea. It would calm down with time. But Donbass became the last straw. It is worse than a crime – it is a mistake as Napoleon would have told. If Russia had not intensified its action in Donbass, there would have been no sanctions, and there would be no war in the east of Ukraine.

– Who will win this war?

– Such wars as the one in Donbass are not won. They can only be prolonged as much as possible. Ukraine was involved in this war in the same state as Russia was involved in the Chechen war. Ukraine made all mistakes that Russia made in Chechnya. It suffered absolutely unnecessary losses because of it. If Ukraine had watched the events in Russia, it would not have made such mistakes.