Historian Felshtinsky: The "Icebreaker Trump" has neither brakes nor a reverse engine 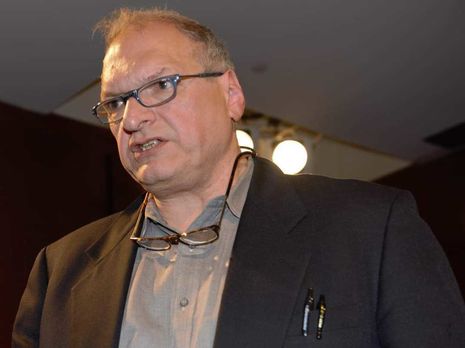 The United States is facing another Constitutional crisis, all thanks to President Trump, writes American-Russian historian Yuri Felshtinsky in his article prepared for Gordon. Felshtinsky discusses the factors that served as an impetus for the attack on the Capitol building in Washington, the role that Trump played in this situation, whether Trump will be held responsible for his actions, and what challenges await the next President Joe Biden in that regard.

Let’s see what happened in the US in the past few days and draw some preliminary conclusions.

Joe Biden was confirmed by the US Congress as the next elected President and will move to the White House on 21 January 2021 despite the protests and insurrection that occurred at the Capitol by the Trump-organized crowds.

Two Democratic candidates took the Senate seats in Georgia. That means that Democrats will have the majority in the new Senate – as they will in Congress. This would represent a rare situation in American history where Democrats control not only the White House but also the Senate and House, entirely thanks to Trump.

US Presidential campaign of 2016 where Trump was supported by the Kremlin in several ways, including financial and propagandistic coverage

The events that unfolded at the Capitol on 6 January 2021 were both tragic and unprecedented in American history. In 1812, the British army invaded the US capital, which was a foreign invasion – the first and the last time the Capitol was under siege.

It is difficult to judge whether the neo-fascist attack on the US Congress is the end or the beginning of the problems bedeviling American Democracy. Simultaneously with the Capitol’s seizure, the past few days saw attempts to undertake similar steps in other American cities. This means that while the recent Washington events became the most egregious and pronounced illustration of the rising fascism in the US, these were by no means an isolated incident.

I have been closely following Trump for the past four-plus years. Even before he became President, I observed that his rise to power became possible only due to the unprecedented interference of Russia in the US Presidential campaign of 2016 where Trump was supported by the Kremlin in several ways, including financial and propagandistic (public relations) coverage. Trump became the most successful project of the Russian Special Services since the FSB colonel Putin came to power in Russia in 2000.

During his four governing years Trump inflicted infinitely more harm on the US and US democracy than Bin Laden. He further polarized the US into Democratic and Republican camps, proceeded to skillfully provoke discontent among the African-American population, and finally organized uprisings of the pro-fascist crowd under the fake illusion of defending a purportedly rigged 2020 election. He installed a staunch loyalist as a US Attorney General and turned the US into a banana republic. Through simple political blackmail, threats and bribery, he shifted the base of the Republican Party away from the basic tenants of democracy, substituting his own personal interests for the interests of the country.

It is quite clear that an enemy of the state ended up in the White House – a person who is a traitor, a dangerous demagogue and a fascist, the one who despises America and who is plotting in his last day in the White House to exonerate himself of all of his wrongdoings and to pardon himself and his family members preemptively for anything and everything that transpired.

I could not fathom why Putin, who openly interfered in the US Presidential Election of 2016 to support Trump, did not bother to do so in 2020. The events that unfolded in Washington on January 6 made it quite clear: this was the final destructive act of Trump’s governance. The "Icebreaker Trump" has accomplished its mission: his supporters played the role of foreign invaders and seized the center of power with minimal losses, publicly encouraged by Trump and his allies in broad daylight for the whole world to see. It is clear now to what end Trump installed, even during his last days, loyalists throughout the US government.

These loyalists were unwilling to deal with the threat posed by the pro-Trump mobs thereby allowing them to gain unfettered access to the Capitol with little resistance from the security apparatus. As a result, elected officials who were in the middle of certifying the next President of the US found themselves directly threatened by the horde of Trump supporters and forced into hiding in the Capitol.

Trust me, we are yet to find out who coordinated the attack on the Capitol and we should not be surprised if faceless Kremlin hackers, anonymous website hosts and openly, round-the-clock anti-democratic Russia Today with its worldwide reach are all behind this operation. An open appeal by Trump for the mobs to storm the Capitol (and reinforced by similar appeals from Rudy Giuliani and Donald Trump Jr.) fell on fertile ground – as did Trump’s appeal during his 2016 Presidential campaign for President Putin to release the 30,000 emails from Hilary Clinton’s computer that were long ago stolen by the Russian Security Services (with Clinton’s emails having been released as a result through WikiLeaks).

On January 6, 2021, an attempt to overthrow the US government was undertaken under the leadership of Trump who lost the Presidential election but was not willing to leave the White House. This attempt failed solely because Congress members managed to escape through Capitol underground tunnels since at the time of the Capitol invasion by the insurrectionists, Congress was in session. If their attempt to escape ended up being unsuccessful, American history could have changed much more dramatically.

As I write this today, Trump is continuing his frantic attempts to hold on to power (we simply are not yet aware of their extent; indeed, we may never know). It’s just that the "Icebreaker Trump" has neither brakes nor a reverse engine.

We might thus find out that the Donald Trump of 2017-2021 was a “young” version of Hitler, and the “older” version is yet to come

It is hard to tell what will happen with Trump and his supporters post-January 21, 2021. Trump successfully created the “stolen election” narrative, which is a complete lie. Joe Biden got the majority of the votes, with the election process having had no clear irregularities. Moreover, despite seemingly close race results, the gap was meaningful by US standards. Franklin Roosevelt’s election in 1932 was the last instance when such a significant difference occurred. Biden won fairly and convincingly, as further reinforced by the Senate runoff election results in Georgia where Republicans lost their majority.

But it’s easier to spread disinformation than the truth, and the “stolen election” fantasy could become something akin to the conviction by the Germans that they lost in World War I solely due to backstabbing by the Social-Democrats. That is why it is difficult to predict whether the January 6 events in Washington are a sign of the defeat of Trumpism in the US or just a failed beer coup a la Hitler in 1932 to be followed by the fascists seizing power.

We can expect further details about Trump’s activities in the White House to be made public after January 21’s change in Administration.

The documents and transcripts of telephone negotiations with foreign leaders previously accessible only by Trump loyalists will be available to the new administration. Some of the former White House staff who are no longer on the government payroll will begin to talk. And, most importantly, Trump who has been messing with our heads about the immunity of an acting President will become an ordinary citizen who can be arrested and tried if reasonably suspected of having committed a crime and be convicted if the suspicions prove legitimate. Thus, the most dramatic pages of Trump’s biography could be written after January 21 since even in the best-case scenario, the general pardon under the US laws only extends to federal crimes but not to the state ones – and there are a lot of states in US.

There’s much talk these days about the need to remove Trump from office immediately under the 25th Constitutional Amendment (Presidential Disability and Succession), which has never been used before. In accordance with this Amendment, Trump can be removed from office by vote for at least 21 days if the Vice President and majority of Congress deem it necessary. Democrats control the House of Representatives, but not the Senate, with the two Democratic winners in Georgia not assuming office yet. However, this scenario has not materialized since Vice President Pence has so far refused to consider the deployment of the 25th Amendment.

Congress can begin impeachment proceedings however, which would be the second time during Trump’s presidency, and there is ample time before the inauguration to do so. The lingering question that remains is whether Senate Republicans, who still hold the majority, will be willing to abandon Trump. If impeachment does not pass both Houses with sufficient votes, then it fails. As a result, we are steamrolling into another Trump-caused Constitutional crisis, and the only light at the end of the tunnel is how little time he has left in office. However, if he is not impeached by both Houses, he would be able to run for President once again in 2024, where we will once again hear the debunked story about rigged elections. This lie will be believed by neo-fascist loons who willingly buy into the notion that Democrats stole the election in 2020. We might thus find out that the Donald Trump of 2017-2021 was a “young” version of Hitler, and the “older” version is yet to come.

Who is Dimitri Simes And Why Is He Trying To Sink Mayflower? Investigation by Yuri Felshtinsky G
22 august, 2018 18.32 |comments:

Historian Felshtinsky: Putin Introduces the New Rules of the Game: The Game without Rules
12 march, 2018 10.33 |comments: