Kasparov: The West has already understood that Russia is an enemy headed by a maniac with a nuclear button. Video 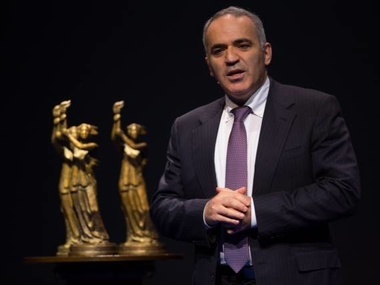 European and American diplomats do not want to conlfict with the Russian President Vladimir Putin, but the fear of the change in the world security system already starts to outweigh, considers the Russian oppositionist and public figure, world chess champion Garry Kasparov. The full version of the program "Visiting Gordon" with Kasparov will appear on the GORDON site in the next few days. Today we are publishing a fragment of the interview taken on December 5, 2014.

By Dmitry Gordon, The Founder of the Project

– What do you think of the situation in Ukraine today?

– I proceed from the fact that external aggression is the only way of maintaining Putin’s rating today. So we will wait in the next half a year.

– There are many adequate people with large money near Putin, and this money is under threat today...

– There is nobody near Putin, Putin is the one. It is very important to understand it. These people are not near him, the matter is that the times of one-party dictatorship have passed. Putin's Russia is a one-man dictatorship today.

– Can there be a plot? There was a plot even against the Fuhrer.

– There can be a plot, but it is another story. Resolute people are needed for a plot, such as regular officers of the Reich. Who? Look at these people. Miserable, cowardly people who owe everything to Putin. Officers of the Reich did not owe anything to Hitler. They had their own background, not to mention that many of them were aristocrats. What background do these people have? Where did they come from, all these people? They had a chance in 2011. They are afraid.

The West has passed a certain point of no return. They have already understood that Putin is a strategic problem

The West did not manage to forward an accurate message to all these so-called liberals and security officers, to all this Kudrins, Shoygus, Sechins and others: "Guys, there will be the Hague and Nuremberg – whatever you call it. Nobody will lift the sanctions." They are still waiting for the sanctions to be lifted, they think that Putin’s logic – billions of dollars invested in the purchase of politicians and businessmen – will give its results: ultra-right Europe, Sarkozy started coming out, the Minister of Foreign Affairs of Germany is a Shroeder’s person. And Berlusconi did not disappear in Italy.

Putin’s agents are everywhere, his partners believe that will break the resistance. Time will come in March, there will be no consensus, and they will still think that everything will work out.

– And what do you think?

– And I suppose that it will not work out. The West has passed a certain point of no return. They have already understood that Putin is a strategic problem. The problem is that it is comfortable and good for them to live this way. It is clear that there are Al-Qaeda and ISIS... But it will be a failure to acknowledge that today’s Russia is not an ally, not a partner, not even a neutral force, that there can be no re-loading. Russia is a dangerous enemy headed by a maniac with a nuclear button. Acknowledging it means that all the policy need to be changed.

They are coming to it because two problems clash in the head of the bureaucrat, no matter whether he sits in Brussels or in Washington: he does not want confrontation with Putin, it is awful. But he is even more afraid of the chaos that will be caused by Putin’s reshaping the borders. The threat that Putin constitutes to the world order outweighs now.

If the Budapest memorandum is a piece of paper that has already been torn, what are you going to tell Iran tomorrow?

One of the contracts ensuring territorial integrity of Ukraine is the Budapest memorandum of December 5, 1994 signed 20 years ago.

– Today is December 5 – it means, exactly 20 years. This document provided for Ukraine’s refusal from nuclear weapon and ensured guarantees. It is clear that there were no military guarantees, but still there were signatures of the Prime Minister of Great Britain John Major and the U.S. President Bill Clinton, we may not mention Yeltsin's signature. They are there. And if this document has no value, it becomes a piece of paper that has already been torn...

– Then what are you going to tell Iran tomorrow? That someone give it some guarantees?

– Or to Northern Korea.

– In this case we rather speak about South Korea than about North Korea. Will South Korea rely on the help from the USA or, maybe, it will take care of itself? How long will Japan suffer from the Chinese hegemony and rely on the American military power? Or will it spend several weeks – it will not take them longer – to produce their own nuclear weapon?

– Israel already has it, I think, we all understand it. And then Iran, Saudi Arabia, Pakistan, and Turkey will not stand aloof – it means that the world will go into an absolutely different paradigm, into another dimension. This nightmare in the head of a diplomat-bureaucrat from Washington or Brussels begins to outweigh. Because they do not want to get involved with Putin.

– At least Putin is a concrete problem. Otherwise it will simply spread all over the world.