Lyashko: In the coalition agreement it is told about decrease in taxes and support of small business, but in offers of Cabinet of Ministers it is not discussed 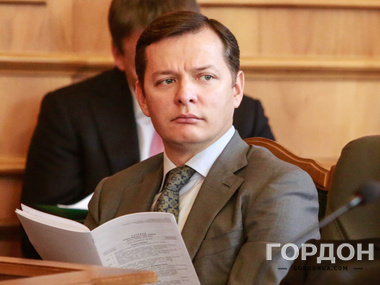 Lyashko is for deolirgazation of ecomony
Photo: Aleksandr Khomenko / Gordonua.com

According to the People's Deputy, the leader of Radical party Oleg Lyashko, the budget has to be not the tool for the belts tightening, but for economic development.

The head of fraction of Radical party in the Verkhovna Rada Oleg Lyashko considers that the bills offered by the government have to be significantly processed. He declared it in the comment to the ' 'GORDON'' .

"In the way which was offered by the government, there is no support of small and medium business. Our fraction will not vote for it. We consider that these bills have to be significantly finished, and still we are not sure whether it is worth supporting them. The coalition agreement declares the weakening of tax pressure, support of small and medium business, economic development, the decrease in unemployment. You can find nothing of this neither in the budget, nor in changes to the Tax code",– Lyashko declared.

"The budget has to serve as the tool not for the belts tightening, but for economic development of the state. We demand to end up the tycoonization and to start an economy unshadowing. We have a mass of resources which can be involved without restriction of the social rights of citizens",–the people's deputy noted.

According to Oleg Lyashko, the government does not want to increase a rent for oil and gas production and they do not cancel the contract with Cyprus thanks to which Ukrainian money leaves.

"Rent rates on oil and gas production remain at the level of this year, and taking into account the inflation – they are twice less. Yesterday pro-government "Narpdny front" disqualified a question of denunciation of the offshore agreement concluded between the USSR and Cyprus by means of which tens of billions of dollars are being moved out from Ukraine. This is also those resources. But, perhaps, someone did not manage to move money out of offshores till New Year yet"— Lyashko declared.